The conference began on Friday, shortly after Trump’s visit to Israel, and MK Hilik Bar said representatives of Muslim countries were eager to speak to him about it. 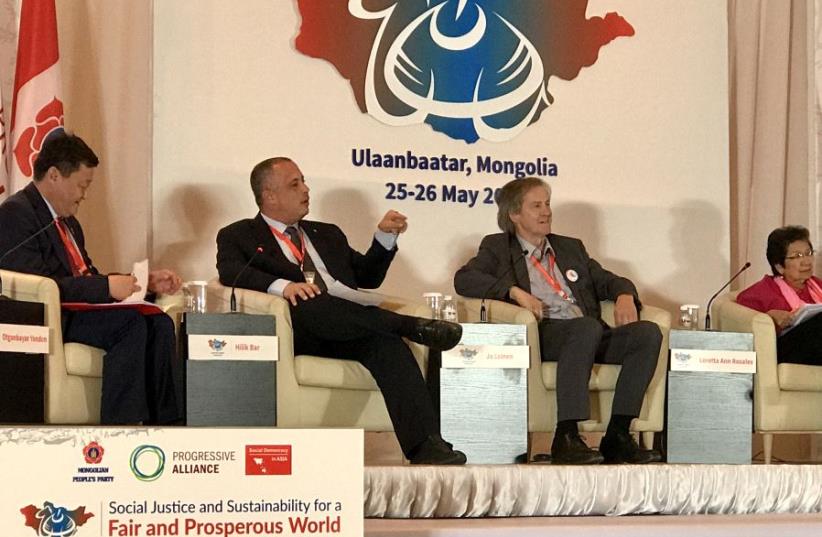 Deputy Speaker of the Knesset MK Hilik Bar at a conference in Ulaanbaatar, Mongolia
(photo credit: Courtesy)
Advertisement
The Arab world views US President Donald Trump as an opportunity for peace between Israel and the Palestinians, followed by normalization between Israel and other Middle Eastern countries, parliamentarians from several countries told MK Hilik Bar (Zionist Union).Bar met over the weekend with lawmakers from Iraq, Morocco and the Palestinian Authority as well as Kurdish representatives at a conference in Ulaanbaatar (formerly known as Ulan Bator), Mongolia, organized by the Progressive Alliance, an international organization of left-wing parties, where he presented his version of the two-state solution.The conference began Friday, shortly after Trump’s visit to Israel, and Bar said representatives of Muslim countries were eager to speak to him about it.“To my surprise... they see him as a strong president to make peace,” he said Sunday.“They think the government of Israel and [PA President Mahmoud Abbas] must and can take advantage of Trump’s momentum to enter negotiations and reach a solution.“They have high expectations of Trump, who’s seen as strong and decisive, as opposed to [former president Barack] Obama,” Bar said. “They see how he responded to ISIS and what he did in Syria [using military force against both], and they think he will try to force an agreement in our area. That’s something Israel needs to think hard about.”In his talks with the Arab lawmakers, Bar found they do not think there is a chance for any regional agreement, if it does not come hand in hand with a final-status agreement with the Palestinians.“They said that there won’t be normalization without progress on the Palestinian-Israeli issue, but if it is solved, it will open a major gate for Israel with Sunni Arab countries,” he said.Bar also said more than one representative mentioned the Arab Peace Initiative, finding it strange that 15 years after it was proposed, Israel has not responded to it at all.“They see on one side a freeze in negotiations, with the Arab world stretching its hand out, having come a long way,” he said. “They see it as impolite and wrong that Israel isn’t responding, not even to say no... They want cooperation and diplomatic and economic ties, but it won’t happen until there is peace with the Palestinians.”Bar said he was surprised by the overwhelmingly positive response he received to his peace plan, which includes Israel recognizing a Palestinian state and then negotiating borders, based on the pre-1967 lines with land swaps to account for settlement blocs, and other core issues.Bar said the representatives of Muslim states told him they had not known there were Israeli politicians who wanted a twostate solution, because “they only hear about the Right.”The deputy Knesset speaker could not give more specific details regarding whom he had spoken to due to the conference’s rules.