Reports of the meeting were nowhere to be found on Al-Jazeera as of 10am Jerusalem time, eight hours after it happened and six hours after photos from the sit-down were released.

Prime Minister Benjamin Netanyahu meets with Egyptian President al-Sisi in New York.
(photo credit: AVI OHAYON - GPO)
Advertisement
From “shameful” to a sign of “peace and tranquility,” the meeting of Prime Minister Benjamin Netanyahu and Egyptian President President Abdel Fattah al-Sisi has been greeted with applause, suspicion and some outrage in the Middle East. It was widely reported in Arabic media and commented upon online. However not all the region’s media has highlighted it and commentators see it very differently depending on where they stand in the region’s complex political makeup.The meeting was no where to be found on Al-Jazeera as of 10am Jerusalem time, eight hours after it happened and six hours after photos from the sit-down were released. The general trend among pro-Qatar or pro-Iranian media was to bypass the issue. PressTV in Iran ignored the meeting but did highlight a new US military base in Israel.Saudi Arabia’s Al-Arabiya English and Arabic didn’t mention the meeting directly on its home page but did have a piece devoted to Abdel Fattah al-Sisi’s visit to New York and his condemnation of supporters of terrorism and criticism of Qatar. Saudi Arabia, Egypt, Bahrain and the UAE have been in a crises with Qatar since June. The general article on Sisi’s New York visit noted that Sisi met Netanyahu to discuss Middle East peace and met with Jewish organizations.  In Arabic the site published a short article on the meeting, claiming it “revived” the peace process and that Sisi stressed the need for a “final and just settlement” of the conflict. 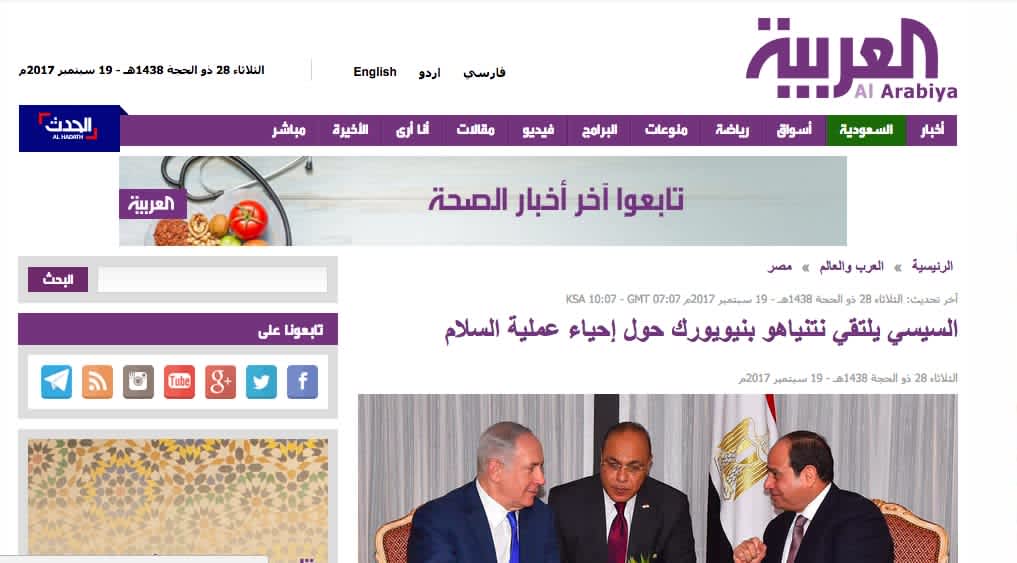 Al Arabiya's online coverage of the meeting between Israeli PM Netanyahu and Egyptian President al-Sisi (SCREENSHOT)Most Egyptian media highlighted aspects of Sisi’s trip and some focused on the Netanyahu handshake. Although Al-Ahram in Egypt did not mention the meeting on its homepage an article did highlight Egypt’s role in trying to aid Palestinian reconciliation. On the Arabic site, it noted that the Secretary General of the Arab League Ahmed Aboul Gheit, “commended Egypt’s efforts which paved the way for this important achievement.” Another article highlighted the Qatar crises, claiming hat Qatar was seeking to “blackmail Israel.” Al Masry al-Youm reported the meeting on its homepage.  It said the sit-down took place in the presence of Egyptian Foreign Minister Sameh Shurki. “Sisi stressed the importance that Egypt attaches to efforts to resume negotiations between the Palestinian and Israeli sides with a view to reaching a just and comprehensive solution to the Palestinian issue in accordance with the two-state solution and the relevant international references.” 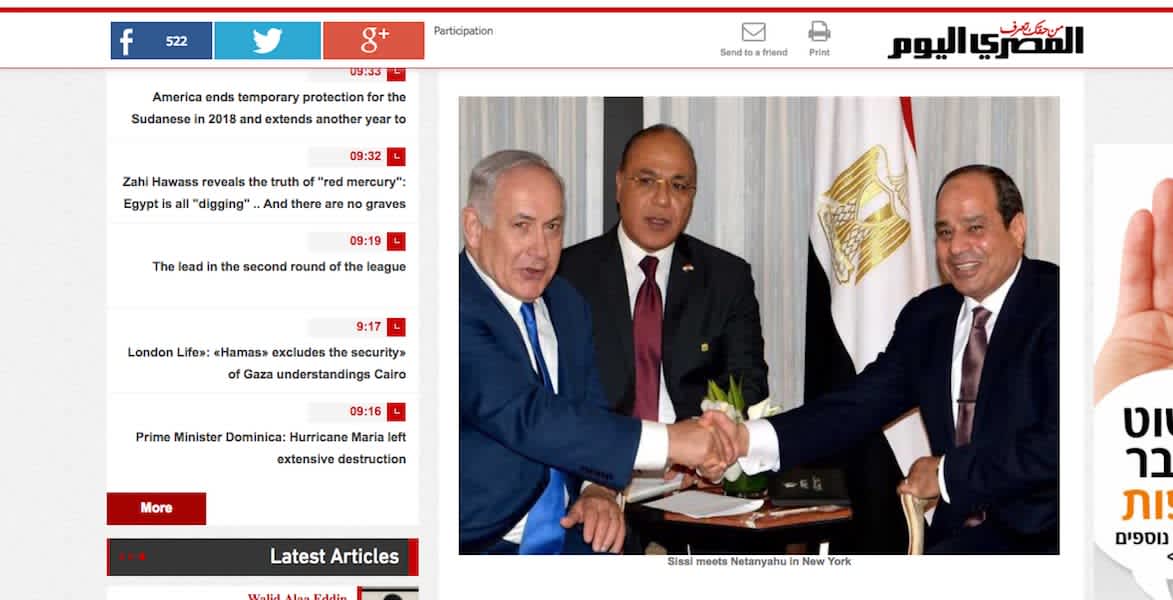 Al Masry al-Youm's online coverage of the meeting between Israeli PM Netanyahu and Egyptian President al-Sisi (SCREENSHOT)The article showed the leaders shaking hands and emphasized that Israel had expressed appreciation for Egypt’s role in the peace process. Egypt’s al-Wafd featured an article that showed Netanyahu shaking hands with US President Donald Trump and discussed the new US military base in Israel, but did not mention the Sisi meeting.Other major Arabic and regional media, such as The National in the UAE ignored the meeting. Al-Sharq al-Aswat didn’t include it. Al-Bayan in the UAE didn’t mention the UN General Assembly at all. Its top stories including something about Janet Jackson and her Qatari “billionaire husband” and salacious stories about domestic violence.Al-Ain in Abu-Dhabi reported the meeting with a very straightforward explanation that it sought to settle the Palestinian issue and “create a new reality in the Middle East where all the peoples of the region [live in] stability, security and development.” It added that the meeting also included Khaled Fawzi, the head of Egyptian intelligence. Milad media, a Palestinian website, said Sisi had launched a peace initiative in May 2016 with the French and Americans and that Sisi hoped “we could achieve some solution to this issue and create hope for the Palestinians and security for the Israelis and write a new page.”On social media the meeting was publicized with photos of the two leaders smiling. One account called @Al_otaibiq8 with 89,000 followers criticized Sisi for “selling Egyptian territory and restoring relations with Israel.” Accounts linked to Qatar, Iran were more critical. Others located in the Gulf and in Egypt seemed to highlight the event without comment or with a kind of cheeky sarcasm. One twitter used named Hamdan al-Mutairi wrote “Unspeakable happiness” with photos of the smiling leaders. A pro-Syrian rebel account also highlighted the “chuckling in public” and noted they had met “secretly last year.” The former  vice-President of the Egyptian students union, Ahmed el-Baqry, tweeted a photo of the meeting which he described as shameful, accusing Sisi of being a “Zionist agent” and mocking the leaders’ “love.” Another user said that it was a good sign of peace and tranquility in the region, while another compared Sisi to Anwar Sadat, who signed the Egypt-Israel peace agreement in 1979.In general the regional coverage of the meeting reveals the cleavages that exist. First of all it plays into the Saudi Arabia, UAE and Egyptian pressure on Qatar. They have linked this to terror funding of Hamas and Hezbollah, two enemies of Israel, which puts Israel in their court. However the general populist view in much of the region is still that Israel is the enemy and that those leaders who openly meet with Israel not only lead to “normalization” but are also attacked as shameful. The disconnect between elite media presentations and how social media discusses the meeting is clear. Particularly interesting is that pro-Iranian media did not latch onto the meeting to criticize Israel. This may reveal that the old days of using the accusation that enemies “work with Zionists” does not play as well when leaders openly meet with the Israeli prime minister and discuss peace.