In addition, many of those implicated in attacks are teenagers. 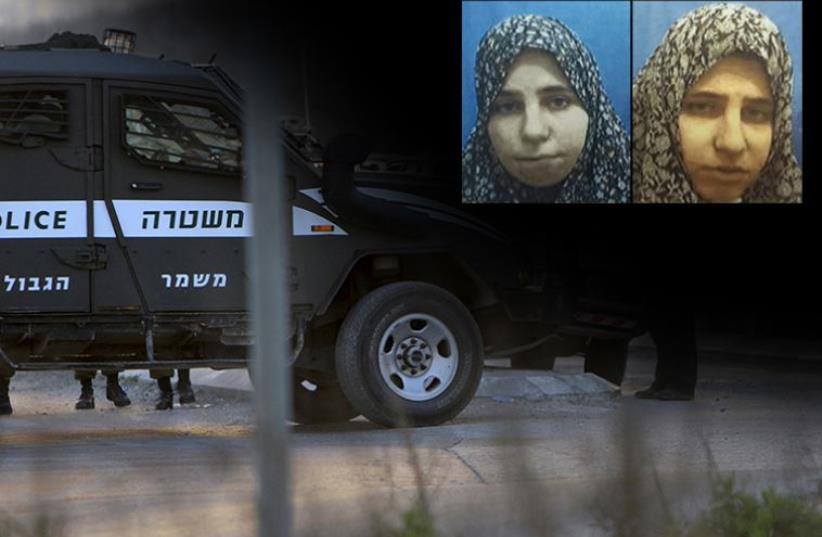 Palestinian twin sisters arrested by Shin Bet for alleged terror offenses
(photo credit: SHIN BET,REUTERS)
Advertisement
Palestinian twin sisters aged 18 who were arrested by Israeli security forces for possession of explosives have brought to the fore the role young women are taking in the recent spate of violence plaguing this region.Women are participating in street protests against Israeli settlements and the army and have perpetrated a number of knife attacks targeting both security personnel and Jewish civilians.News of the twins’ arrest was released to the public just days after a 13-year-old Palestinian girl was shot dead by a security guard whom she allegedly tried to attack with a knife.The twins, Diana and Nadia Hawila, were arrested in December in their West Bank village of Shuweika by the Israel’s internal security agency. The Shabak, as the agency is called, said that bomb-making equipment, including fertilizer, and Hamas headbands were found in the Hawila home. Diana “was exposed through the Internet to extremist Islamic preaching that encouraged women to take part in terror attacks,” the agency said, and had also learned how to make explosives online.The teenager allegedly planned to carry out attacks after purchasing the necessary chemicals herself. Nadia, her twin, was arrested and charged with aiding her sister in hiding the explosive materials in the family home.Though women have taken an active part in protests and attacks since violence escalated in October, the alleged Hawila plot is unusual, and represents a greater ambition to inflict mass casualties.This may be exactly what got Diana caught. Security forces have an easier time detecting a teenager researching explosives online than preempting a kid who takes a knife from the kitchen table, walks out the door and stabs somebody.For instance, Rokya Abu Eid, the thirteen-year-old who allegedly tried to stab a security guard outside the Israeli settlement of Anatot after quarrelling with her family.While violence has also erupted within Israel’s internationally recognized borders, the preponderance of attacks since November have taken place in the West Bank, which Israeli authorities refer to by its Biblical names, Judea and Samaria.“Eleven terror attacks were carried out by females… in the Judea and Samaria area (since) the first of October, the beginning of the wave of terror,” a spokesperson for the Israeli Army told The Media Line. During this time there has been a “substantial rise” in the number of attacks, the spokesperson noted.These figures do not include the number of attacks carried out by Palestinian women inside Israel, which a spokesperson for the Israeli Police said was unavailable. However, a significant incident occurred on November 23, 2015, when two teenaged girls, the cousins Hadil and Nurhan Awad, aged 16 and 14 and armed only with scissors, attacked shoppers at Jerusalem’s central Mahane Yehuda market. A 70-year-old man from Bethlehem was slashed and seriously wounded by the girls, both of whom were shot by police, Hadil fatally.Hadil Awad was the sister of Mahmoud Awad, who died in November 2013 at the age of 24, eight months after an Israeli soldier shot him in the neck with a rubber bullet during a protest near the Qalandiya checkpoint.Muhanad Darabi, a freelance Palestinian journalist who has spent a lot of time covering street protests, underscored the relative youth of the attackers. “People say it is (caused by) incitement but if you look at most of the girls who have done the stabbings it’s just from frustration – most are from villages, refugee camps or from Hebron,” Darabi said, in conversation with The Media Line, mentioning the southern West Bank city that has been an epicenter of clashes.Darabi noted that attacks carried out by ideologically motivated youngsters, either nationalistic or religious, are more often planned, and can result in higher casualties. The remaining incidents are more spur-of-the-moment, amateurish outbursts from people who have snapped with frustration, he said. “Basically they are done with the occupation. It is actually a suicide attack, they know that 90% get killed.”Sundus Azza, a young student and activist with Youth Against Settlements who lives in Hebron, told The Media Line that she doesn’t “believe any of this,” meaning that, like many of her contemporaries, she thinks the individuals killed by Israelis were not conducting terror attacks at the times of their death, but were killed for no reason at all.Israel has released CCTV footage of most of the incidents clearly showing violent attacks underway.Azza pointed out the increased role of women in the protests, if not in attacks themselves, saying that “in the last protest that happened in Hebron there were maybe more than 500 women.” Her estimate could not be independently corroborated.Darabi, ever the journalist, suggested that there might be other reasons for the apparent increase in women’s participation: “the media, they are fascinated by it… the foreign media is focusing more on girls throwing stones or helping the guys throw molotovs.”