Ahmad Manasrah, 20, "lost his childhood in Israel's prison system," said Amnesty International, after going on a stabbing rampage in 2015. 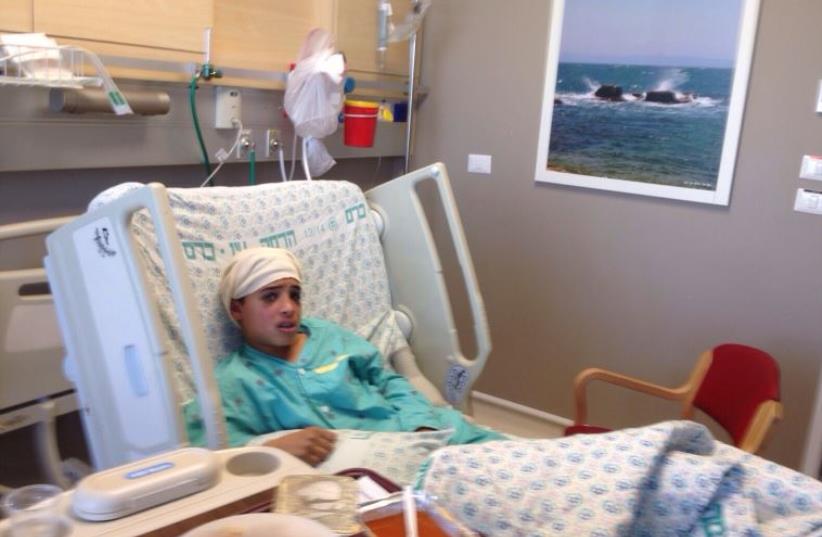 Ahmad Manasrah, who engaged in a stabbing attack in Pisgat Ze'ev in 2015, was called a victim of 'Israeli Apartheid' and the Israeli justice system by the human rights NGO Amnesty International on Wednesday.

"20-year-old Ahmad Manasrah is one of many victims of [Israeli Apartheid’s] discriminatory justice system, where torture is routinely used against Palestinians," Amnesty tweeted. "His health is now at stake."

Amnesty asserted that Manasrah had "lost his childhood in Israel's prison system," and called on Israeli politicians to free him due to deteriorating health.

On Friday, Amnesty published a statement regarding a parole board hearing on Sunday. Amnesty contends that Mansarah is suffering from schizophrenia, psychotic delusions, depression, and suicidal ideation, and should be released and given medical care.

“Ahmad Manasrah has been subjected to a catalogue of injustices by the Israeli authorities, including deleterious effects of incarceration on his development and prolonged solitary confinement," said Heba Morayef, Amnesty International’s Regional Director for the Middle East and North Africa in the Amnesty statement on Friday.

"He endured ill-treatment during interrogations, which were conducted without his parents or lawyers’ presence, and was denied the right to a fair trial. He should have been released a long time ago, yet he remains in unnecessary suffering in Israeli prisons.”

"20-year-old Ahmad Manasrah is one of many victims of [Israeli Apartheid’s] discriminatory justice system, where torture is routinely used against Palestinians."

In 2015, at the height of what was called the "Knife Intifada," then 13-year-old Manasrah and his 15-year-old cousin Hassan Manasrah attacked passing civilians on a street in Pisgat Ze'ev. The wave of terrorism saw many minors participate in violence and terrorism.

A man suffered two deep stab wounds to the chest and a 12-year-old child four stab wounds to the upper right chest after they were stabbed by the two. The child suffered from posttraumatic stress disorder following the attack, a Supreme Court ruling noted.

Video of the event shows the teens with knives in hand chasing their victims, and Hassan charging at officers when confronted. He was shot and killed, and Ahmad was stopped when he was struck by an intervening civilian's car.

Amnesty asserted that the younger Manasrah was arrested in "relation" to the stabbing, and was convicted "despite being found by the courts not to have participated in the stabbings."

According to the Supreme Court ruling on Manasrah's appeal, he "took an active and actual part in the act of stabbing even though he did not perform the actual stabbing." Manasrah was determined to have taken part in the planning of the attack, participated in the sequence of stabbings, and attempted to stab the victims.

Manasrah reportedly initially told police that he "went there to stab Jew," and that he and his cousin sought to become martyrs, motivated by perceived violation of the status quo on Temple Mount. Later Manasrah claimed to the court that he had never intended to kill anyone, only to scare them, and had been against harming children or the elderly. This claim was dismissed by the court in appeal.

Manasrah was convicted of two counts of attempted murder and unlawful carry of a knife in 2016. He was sentenced to 12 years, but it was later shortened upon appeal to 9 and a half years.

Attempted murder can result in a maximum penalty of 20 years, according to the appeal decision.

Amnesty claims that his sentence was just because he was too young to be jailed, but the law was changed for instances of terrorism prior to his sentencing.

The NGO also claimed that he was allegedly tortured. The statement noted that interrogators yelled and insulted Manasrah, and described solitary confinement as torture.

On Sunday, there was a hearing for Manasrah's early release. It is his third parole hearing, and it is unknown when the results will be issued.

Impeding the release is a 2019 law limiting parole boards from granting early releases for terrorism.

Manasrah has been the subject of an online campaign calling for his release, operating under the banner #FreeAhmadManasra.

He was previously the subject of furor when a clip of the attack was released showing Manasrah after he had been struck by a car, bleeding, limbs bent, and writhing in pain.

The video became immensely popular, and in response, Palestinian Authority President Mahmoud Abbas claimed that Manasra had been “executed in cold blood” by “Jewish settlers.”

Pro-Israel activists and commentators slammed Amnesty for promoting Manasrah as a victim.

"This is the same Ahmad Manasra who attacked a 13-year-old Israeli boy," said Aviva Klompas, former head of speechwriting at Israel's mission to the UN. "Seem [Amnesty] doesn’t see a need to defend Israeli children."

"In order to promote [Human Rights], Amnesty must condemn this use of children as soldiers," said Centre for Israel and Jewish Affairs (CIJA) research director Becca Wertman-Traub.