A clever marketing pitch for Sabra hummus disguised as a sketch by new host of "The Late Show" Stephen Colbert garnered both laughs and jeers. 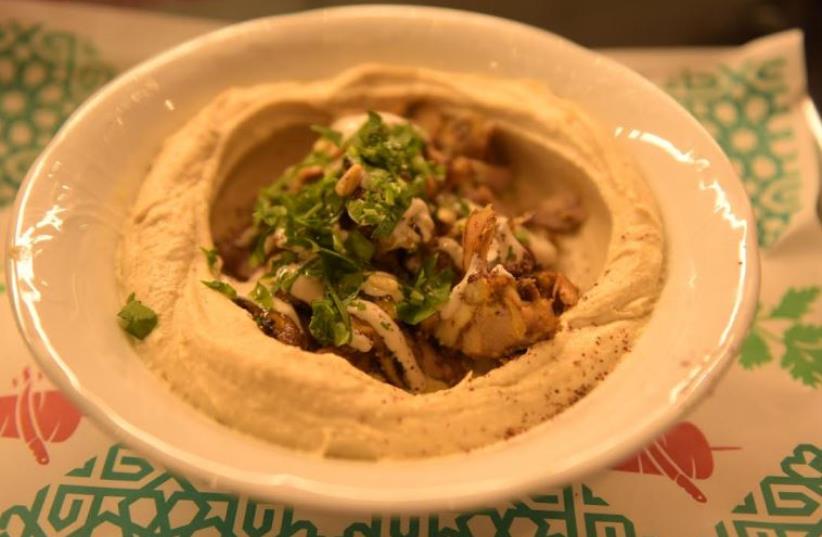 Hummus at Bandura restaurant in Bnei Brak
(photo credit: ELAD GUTMAN)
Advertisement
A clever marketing pitch for Sabra hummus dressed as a sketch by new host of "The Late Show" Stephen Colbert garnered both huge laughs for the comic star Tuesday night and jeers from supporters of the BDS movement, who expressed disappointment with the show's endorsement of the Israeli-owned product, according to The New York Times.Shortly after Colbert began his second-ever episode as star of the late-night show, the new host launched into a segment that simultaneously mocked paid endorsements and acted as one. Colbert explained to his audience that he had entered into an agreement with a demonic amulet in order to become the new host of the talk show, but as part of the deal was forced into "certain regrettable compromises," like endorsing Sabra-brand hummus, The Times added.Supporters of the BDS movement call for a ban on Sabra hummus, which is produced in the United States, because it is partly funded by the Strauss Group, an Israeli food company. Critics of Colbert's advertising ploy took to Twitter to express their dismay at the show's endorsement.


Palestinian-American commentators supportive of the BDS movement, including Maysoon Zayid and Nawal Atallah, along with the former director of the Palestine Cultural Center for Peace in Boston, Omar Baddar, also chose to enter into the conversation. BDS supporters highlighted the contextual frame of the sketch, mainly that Colbert's endorsement was conditioned on a pact with evil forces.

I guess it's fitting that an evil curse is the explanation for why @colbertlateshow is advertising #Aparthreid Sabra Hummus. What a shame!
— Omar Baddar (@OmarBaddar) September 9, 2015