Jenin terrorist posts online day before being killed: 'I have decided to meet God'

One day before attempting to throw a bomb at Israeli Border Police and being killed, Al-deen Ezz alluded to his deadly plan. 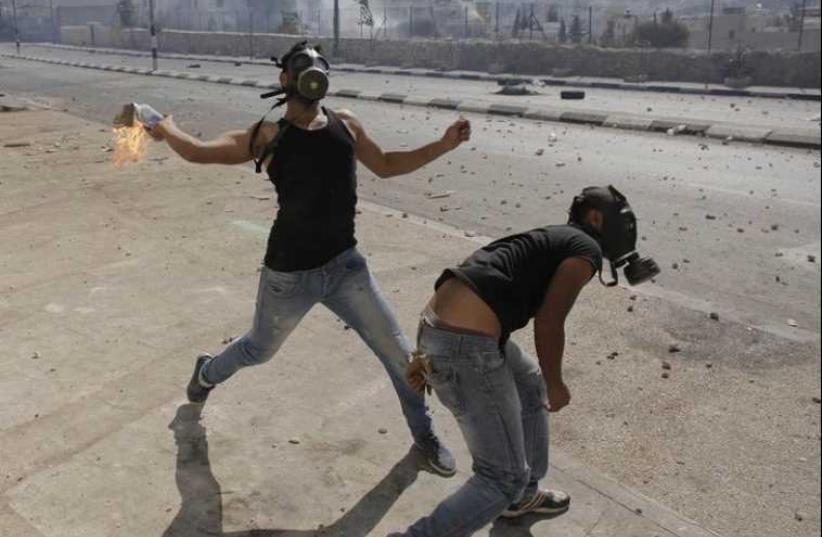 A Palestinian protester hurls a Molotov cocktail at Israeli troops following a demonstration against the Israeli offensive in Gaza, in the West Bank town of Bethlehem.
(photo credit: REUTERS)
Advertisement
Border Police special operations officers shot a Jenin man during an arrest raid in the city on Wednesday morning.Reuters quoted Jenin residents and hospital officials as saying the 23-year-old man died of his wounds at the hospital.The Border Police said one of its special operations units was finishing the raid in the Jenin refugee camp when one of the officers saw a man holding what appeared to be an explosive device. The man tried to throw it at the officers, at which point they opened fire, wounding him and forcing him to drop the device, which exploded nearby.The raid was not coordinated with Palestinian Authority security forces, the Border Police said.No Israelis were wounded in the operation.Not long after midnight Tuesday, the man, listed on Facebook as Al-deen Ezz, had written a post saying “It is now possible to do what I want, to do everything, and I have decided to meet God.”IDF and Border Police fighters carried out raids across the West Bank overnight Wednesday, arresting nine suspects believed to be involved in terrorist groups and one suspected of taking part in a violent public disturbance.