By BEN HARTMAN
OCTOBER 8, 2015 15:09
Scene of attack in Tel Aviv
Advertisement
The wave of terror attacks in recent days came to Tel Aviv on Thursday, when a young Palestinian man armed with a screwdriver stabbed a female soldier and wounded  four more bystanders before he was shot and killed by an Air Force officer who happened to be on the scene.Like other recent attacks, it happened at one of the busiest places in the city -  Menachem Begin St and Mozes St, across from the Israel Defense Forces headquarters and Azrieli mall, when the area was jammed with pedestrians in the middle of Thursday afternoon.The attacker, later named as east Jerusalem native Tair Abu-Gazala, aged 19, apparently walked out of a building site on Menachem Begin armed with a screwdriver and stabbed the female soldier, knocking her to the ground.According to Yarkon police subdistrict commander (Dep.-Ch.) Yehuda Dahan, the attacker tried to steal the soldier’s service rifle but by then she was sitting on it on the pavement, and after a few moments Abu-Gazala gave up and started running down Mozes street.It was at this point that a number of bystanders gave chase, knowing full well that an attack was in progress.Cab driver Ilan Danino was still holding a tire iron in his hand on Thursday when he described how he saw the attacker running down Mozes Street and parked his cab in the middle of the road and began to give chase. It was then that he saw a young Air Force officer who would soon be hailed as a hero in the news.Sec.-Lt. Daniel, an officer in the IAF’s air defense department said he saw the terrorist stab the soldier “and I understood this was a stabbing attack. So I got out of my car, ran towards him and neutralized him from close range. I was in the right place at the right time and did what is expected of every fighter in the Air Force and IDF as a whole.”Abu-Gazala was shot down on the Mozes bridge over the Ayalon Freeway, where he was pronounced dead, wearing a shirt that read “time heals all wounds”. His body would be evacuated within the hour, and after the scene was cleared of police, a man on an electric bike planted an Israeli flag at the spot where Abu-Gazala was killed.Dep.-Ch. Yehuda Dahan took his time in front of the press to emphasize what he said is the “high awareness of citizens and soldiers and people who carry weapons”, which he said in this case prevented a mass casualty event.“We’re seeing incidents across Israel that are being stopped by police, military personnel, and also armed civilians who are able to stop attacks and prevent further harm. We are of course deploying in higher numbers than usual, but the alertness that civilians show is of great importance.” 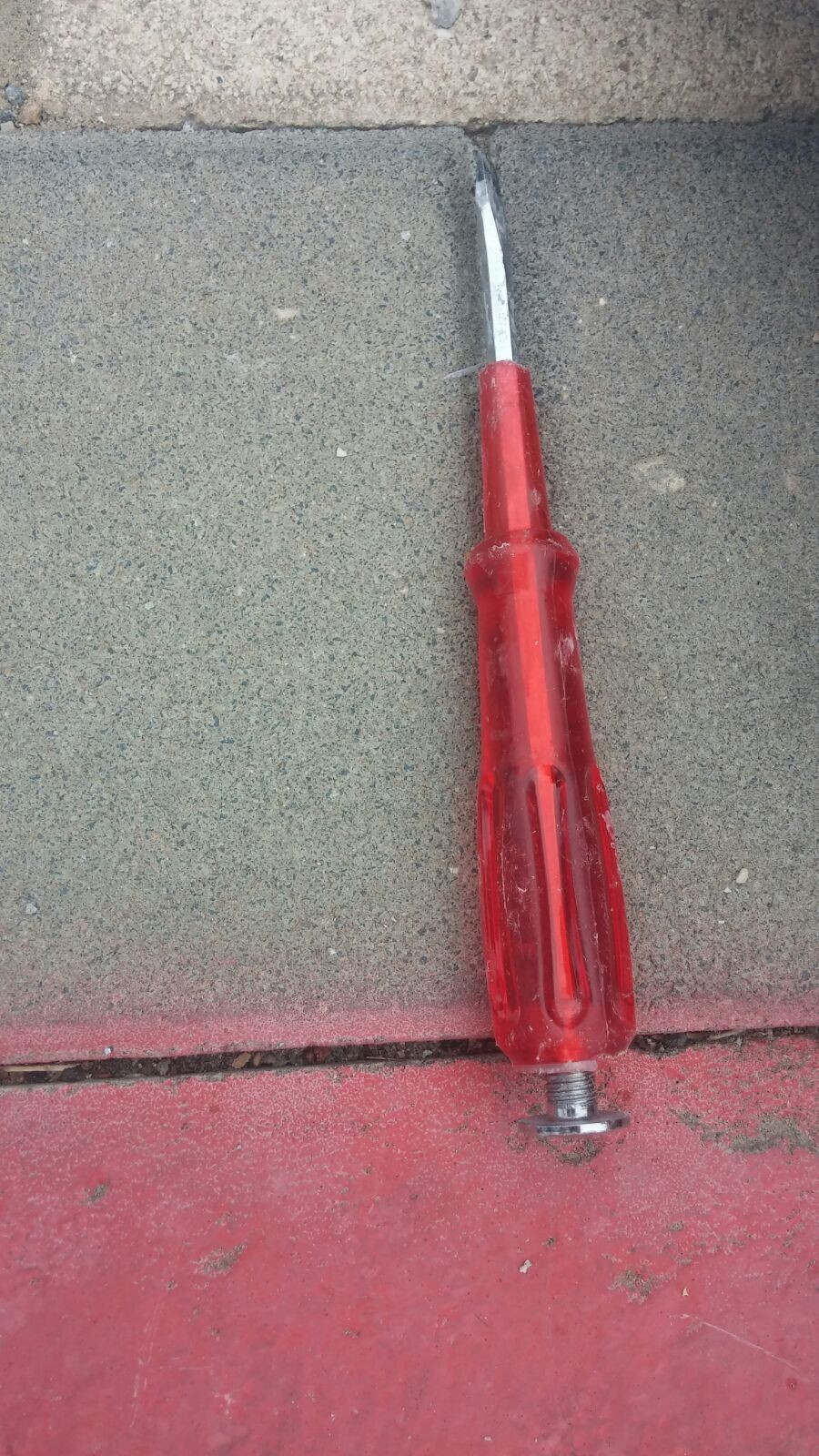 Screwdriver used by terrorist in Tel Aviv terror attack‏
Shortly after the Tel Aviv attack, an Israeli man was stabbed in Kiryat Arba, near Hebron. One person in the Kiryat Arba attack was reportedly in serious condition. The Tel Aviv terror attack was the second of the day and the eighth since Wednesday. Earlier on Thursday, an Israeli was seriously wounded in a stabbing attack on Bar Lev Street in Jerusalem.