"I used to take pride in the fact that I would describe myself as a ‘British-born’ Israeli. I feel no pride about that now.”

By BENJAMIN WEINTHAL
JANUARY 12, 2018 00:29
Palestinian militants from the al-Aqsa Martyrs Brigades, a militia linked to the Fatah movement, demonstrate against the Hamas government in the West Bank town of Ramallah October 4, 2006.
(photo credit: REUTERS)
Advertisement
BERLIN – Kay Wilson, who barely survived a Palestinian terrorist attack, prompted MP Stephen Twigg, chairman of International Development Committee in the UK Parliament, to conduct talks with fellow lawmakers about the misuse of British funds to support Palestinian terrorism.The Jerusalem Post obtained a copy of Wilson’s letter on Thursday and conducted an interview with the British Israeli on the parliamentary action and the chances of the UK replicating the American Taylor Force Act, which would bars US funds for the Palestinian Authority that are used for terrorism.“I have not heard back from Mr. Twigg, and was therefore surprised to read in the Daily Express that he had received my letter, yet had not acknowledged this personally to me,” said Wilson.The Daily Express wrote on Wednesday that “a powerful commons committee is to consider launching an inquiry into the way the Palestinian Authority is giving British taxpayers’ money to terrorists in prison.”Wilson told Twigg in her letter that “My co-signatories and I are writing to you about the glorification of violence, the incitement of violence and misuse of British Aid funds by the Palestinian Authority. We also draw to your attention evidence that strongly suggests that DFID [Department for International Development] civil servants and minsters have misled Parliament. In 2010 I was hiking in the Judean Hills with my friend Kristine Luken, when two Palestinian terrorists attacked us. We were held for 30 minutes at knife-point, then gagged and bound before being butchered with machetes. Kristine was murdered. I watched my friend being killed before my eyes.”She added, “I only survived because I played dead. I was stabbed 13 times and had over 30 bones broken by the sheer force of the blows. Each time my attackers plunged their machetes into me I could hear my bones crunch, and my flesh ripping from the serrated blade. They left, only to return moments later and roll me over. I watched my attacker plunge the knife into my chest, just missing my heart. I attach pictures of my injuries. The two men who attacked us were jailed. They were part of a terrorist cell aligned to the Fatah group, the group that runs the Palestinian Authority.” 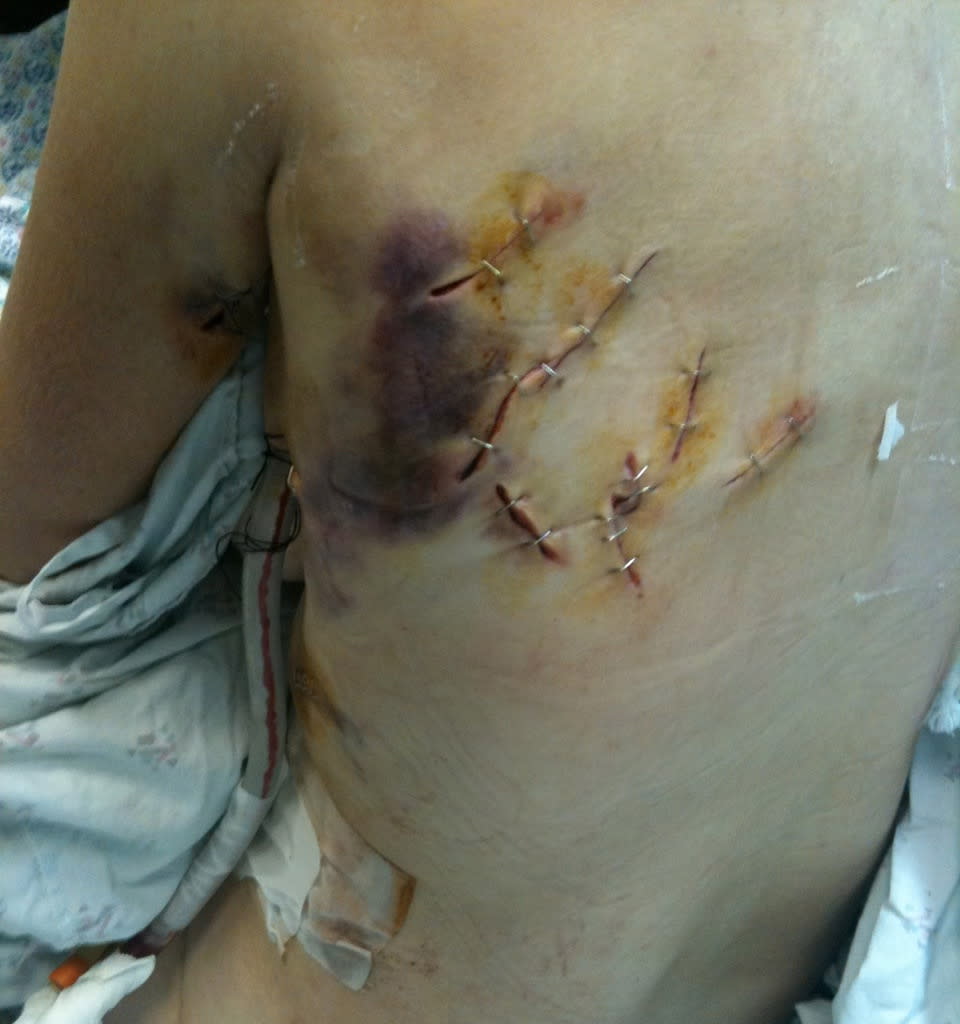 Kay Wilson's suffered extensive injuries from a Palestinian terror attack (photo credit: Courtesy)Twigg told the Daily Express: “I received Kay Wilson’s letter and I take its contents very seriously.”Wilson added that British taxpayers via the Department for International Development supported the two Palestinian terrorists, who are currently in prison in Israel, with £9,000.Wilson said that “I have lived in Israel for 32 years. I came because I wanted to be part of my people Israel. I used to take pride in the fact that I would describe myself as a ‘British-born’ Israeli. I feel no pride about that now.”In her four-page letter to Twigg, Wilson wrote that “In the past DFID has suspended aid packages when evidence has emerged of taxpayer’s money being misspent or on the discovery of unacceptable behavior, and the IDC [Parliament’s International Development Committee] has also been swift to investigate when a misuse of funds or malpractice has been highlighted. However, despite the fact that your committee possesses wide-ranging powers to examine DFID’s work, you have chosen to ignore the PA’s funding and incitement of terrorism.”She challenged the verification and quality controls system of the Department for International Development as woefully inadequate. “Neither my co-signatories nor I believe that the diversion of aid from PA civil servants to PA health and education workers is legitimate. What is more disconcerting is the IDC’s reluctance to investigate these matters. The PA continues to pay terrorists by simply re-channeling the money through different entities, and the evidence that it glorifies violence is incontrovertible. British Aid funds are not hypothecated [secured]. Our money to the PA either directly supports terrorism, subsidies terrorism or releases other PA funds to support terrorism.”Wilson wrote, “the behavior of the PA is in direct conflict with the principles of your committee’s report on ‘Tackling Corruption Overseas.”’She cited the Taylor Force Act, which would slash US funding to the PA because it finances terrorists. Wilson asked in her letter: “Why are British politicians (and in particular the IDC) not seeking to adopt the same principles to support victims like me?”When asked about the Israeli government’s response to her letter, Wilson said that “I have heard nothing from my own government concerning my letter, but that does not surprise me. Ever since the attack I have heard nothing at all from any member of the Knesset, which surprises me too, because if it wasn’t for the fact that I was brave, stabbed the guy and walked a mile dying, the terrorists would probably still be at large today.”Prof. Gerald Steinberg, the president of the Jerusalem-based NGO Monitor, told the Post that “for many years, UK officials, like their European counterparts, have presided over the transfer of billions of pounds to Palestinian frameworks. For the most part, there was little transparency or accountability, allowing funds to flow from DFID, in particular, to the PLO and from there to terrorists and allied NGOs.”Steinberg added that “bureaucrats and political officials who support the Palestinian cause turn a blind eye when taxpayer money directly and indirectly goes to the terrorists who slaughter Israelis. This is starting to change as responsible ministry officials take more control, but stronger regulations, as well as more transparency over the entire funding process involving Palestinians (including through UNRWA and UNICEF), are urgently needed.”