The investigation into the shooting was opened after security camera footage of the incident emerged. 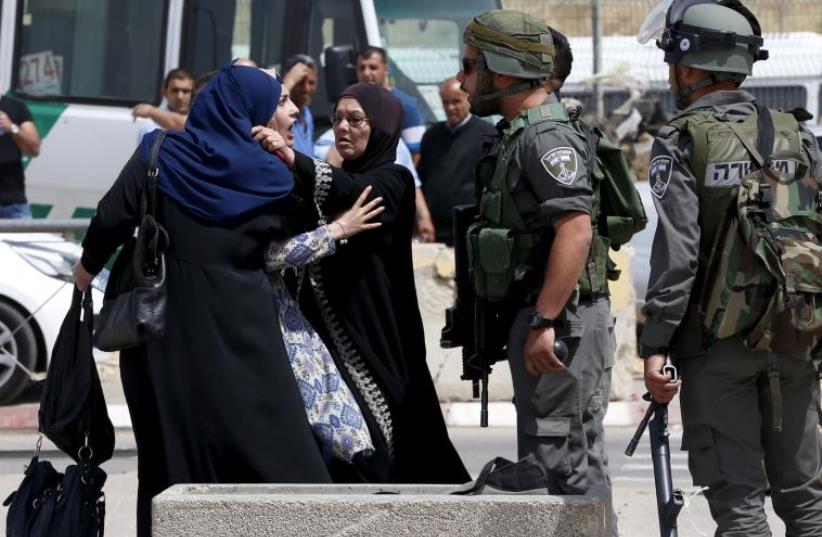 A Palestinian woman argues with border policeman near the scene of attempted stabbing attack at a checkpoint in Kalandiya‏
(photo credit: REUTERS)
Advertisement
The State Attorney’s Office has decided to drop the investigation of two civilian Israeli security guards working at the Kalandiya checkpoint between Ramallah and Jerusalem who shot to death two Palestinian siblings in April.The investigation into the shooting was opened after security-camera footage of the incident emerged that showed the civilian guards had fired their weapons and not the soldiers stationed there, as previously thought.In the incident in question, Maram Abu Ismail, 23, and her 16-year-old brother, Ibrahim Taha, were walking toward the checkpoint and at some point started a conversation with the security guards which ended with Maram shouting “Allahu Akbar” and Ibrahim cursing them.The Justice Ministry said in a statement about the decision to close the case that Maram had drawn a knife and thrown it at the security guards, prompting a police policeman stationed at the crossing to fire in the air while the two guards shot the siblings.The ministry said that because Ibrahim had his hand in his pocket throughout the encounter, which aroused suspicion, and because Maram threw a knife at the security personnel, there was ample reason to suspect the two were going to attack them.The knife found on Ibrahim’s body following the incident, which was a duplicate of the one that Maram threw at the security guards, further pointed to his violent intent, the ministry added.The ministry decided to close the case against one of the guards on the grounds that the charges were baseless, while the other guard’s case was closed due to lack of evidence to contradict his claim that he had felt threatened.After the attack, the pair’s uncle, Hassan Taha, said that his niece and nephew were killed on their way to a doctor’s appointment.“She was taking her brother to the doctor for a treatment. When they arrived to the checkpoint, they [police] shot them. They shot the girl and her brother threw himself on her [to protect her], and they shot him as well,” Taha said.“What they [police] say is that they came to stab. If someone is going to stab, does she take her brother with her? This makes no sense. If someone wants to stab, she goes alone. She does not take her brother with her,” Taha said.Tovah Lazaroff contributed to this report.