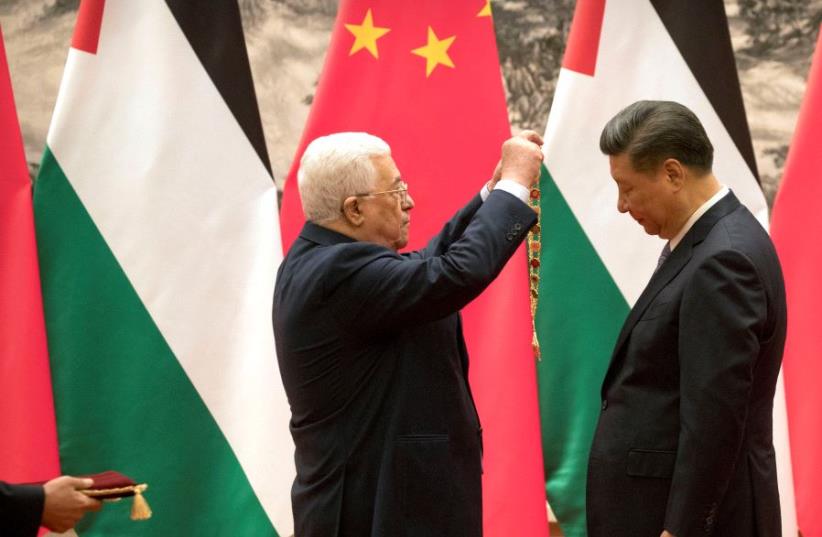 China's Xi Jinping and PA president Mahmoud Abbas in China, July 2017
(photo credit: REUTERS)
Advertisement
Chinese President Xi Jinping pledged on Tuesday to make "unremitting" efforts towards promoting peace in the Middle East following a meeting with Palestinian President Mahmoud Abbas, as China steps up its diplomatic engagement with the region.Palestinian officials have urged China, which supports an independent Palestinian state, to do more in the Middle East peace process.Chinese envoys occasionally visit Israel and the Palestinian Territories, though China has traditionally played little role in Middle East conflicts or diplomacy despite its reliance on the region for oil.Speaking to reporters after meeting Abbas in Beijing's Great Hall of the People, Xi said the international community paid close attention to the Middle East peace process."As the Palestinian people's good friend, partner and brother, China hopes Palestine and Israel can achieve peace as soon as possible and live and work in peace. China will make unremitting efforts for this," Xi said, after receiving a Palestinian medal of honor from Abbas.China has historically had a good relationship with the Palestinians.The Middle East, however, is fraught with risk for China, which has little experience navigating the religious and political tensions that frequently rack the region.Deputy Chinese Foreign Minister Zhang Ming later said Xi reiterated support for the establishment of a Palestinian state, and also called for the security of both the Palestinians and Israelis to be protected.It is important to advance a political settlement on the basis of the two state solution, Zhang added, paraphrasing Xi.US President Donald Trump has renewed efforts to get Israeli-Palestinian talks going again, after they collapsed in 2014.His Middle East envoy, Jason Greenblatt, announced an Israeli-Palestinian water agreement last week but dodged questions on whether he was making headway on reviving peace talks.Diplomats say that China is trying to play the role of "honest broker" in the Middle East, as it lacks the historical baggage of the Americans or the Europeans.Xi told visiting Israeli Prime Minister Benjamin Netanyahu in March that peaceful coexistence between Israel and the Palestinians would be good for both parties and the region, and that it was favored by the international community.Netanyahu's trip came just days after China hosted Saudi Arabia's King Salman and signed deals worth as much as $65 billion with Riyadh.China also has close ties with Iran, whose nuclear program has seriously alarmed Israel and Saudi Arabia.More broadly, China hopes a peaceful Middle East will lessen the flow of ethnic Uighurs, a Muslim people from the far western Chinese region of Xinjiang, to Syria and Iraq to join up with militant groups there.