According to UKLFI, the DCI-P, which has close links to the PFLP terrorist group, can no longer receive donations in US Dollars, euros or pounds sterling via transfers from Citibank and Arab Bank. 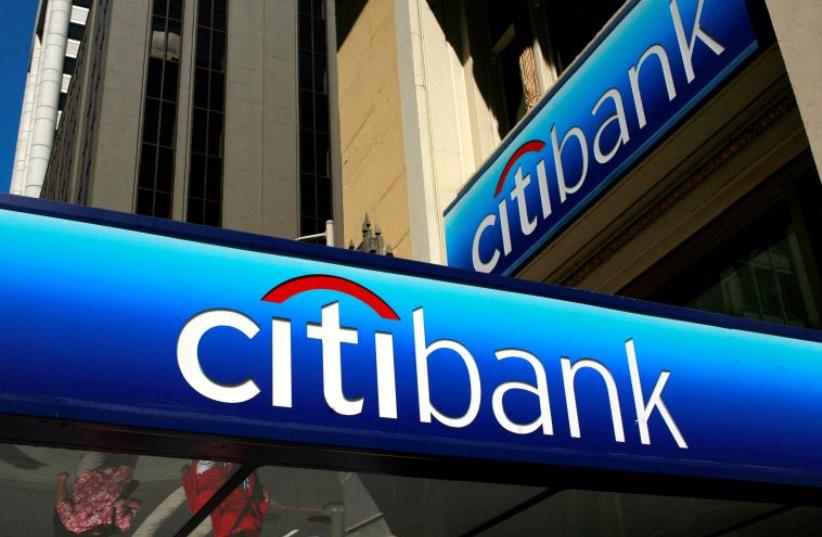 Citibank
(photo credit: ROBERT GALBRAITH/REUTERS)
Advertisement
The United Kingdom Lawyers for Israel (UKLFI) announced on Tuesday that their organization succeeded in stopping the Defense for Children International Palestine (DCI-P) – a NGO accused of close links to a Palestinian terrorism entity from receiving donations by bank transfers from Citibank and Arab Bank PLC. UKLFI director Caroline Turner said, “I am extremely pleased that we are succeeding in shutting down the transfer of donations to this terror linked NGO.”According to UKLFI, the “DCI-P, which has close links to the Popular Front for the Liberation of Palestine (PFLP) terrorist group, can no longer receive donations in US Dollars, euros or pounds sterling via bank transfers from Citibank and Arab Bank. UKLFI wrote to Citibank and to Arab Bank in May 2018, highlighting DCI-P’s links to the terrorist groups, and requested that Citibank and Arab Bank withdraw their banking services to DCI-P. Now these banks no longer provide banking services to the terror linked NGO.”The US, the EU and Israel have classified the PFLP as a terrorist organization. The UKLFI wrote, “On 22 May 2018, it was possible to send donations in US Dollars to DCI-P via Arab Bank PLC in Ramallah, or via Citibank in New York. Now these banks no longer appear on DCI-P’s ‘other ways to give’ website page.”The UKLFI cited a examples of a tight working relationship between the Defense of Children International Palestine and the PFLP.“Several of DCI-P’s board members have ties to the PFLP,” the UKLFI wrote, adding, “Mahmoud Jiddah, who was elected to the DCI-P board in May 2012, is reported to be a PFLP member. He was imprisoned by Israel for 17 years for carrying out grenade attacks against Israeli civilians in Jerusalem in 1968. Hassan Abed Aljawad, another DCI-P board member up to 2018, is described as a PFLP activist or leader representing the PFLP at public events.”THE UKFLI noted that “Shawan Jabarin, an alleged PFLP activist, was a member of DCI-P’s board of directors from 2007 to 2014. Jabarin is Al Haq’s general director. Jabarin was convicted in 1985 for recruiting members for the PFLP and arranging PFLP training outside Israel. In 1994, Jabarin was again arrested for having links to the PFLP and was placed in administrative detention for six months. Israel noted in its submission that he ‘had not discontinued his terrorist involvement and maintains his position in the leadership of the PFLP.”’The UKLFI said the “DCI-P’s latest published annual report for 2014 is dedicated to Hashem Abu Maria, one of its employees killed during a riot on 25 July 2014. DCI-P also posted a news alert on its website mourning the death of Abu Maria. However, Abu Maria was a member of the PFLP. His obituary featured on the PFLP website and in its Facebook postings, where he was described as a fighter commander.”The Defense for Children International Palestine is a long-standing member of the BDS (boycott, divestment and sanctions) movement targeting Israel. The DCI-P is listed a supporter on the main BDS movement website under the caption, “Palestinian civil society call for BDS.” The DCI-P did not immediately respond to media queries from The Jerusalem Post.The Post reported on June 11 that the UK organization Medical Aid for Palestinians (MAP) spreads antisemitic messages and funds NGOs linked to the terrorist group Popular Front for the Liberation of Palestine, and that two pro-Israel legal groups complained to Britain’s Charity Commission.The Lawfare Project and UK Lawyers for Israel filed the complaint last week, saying MAP used some of its annual income of £5.4 million (NIS 25.8m.) on political propaganda, deviating from its stated charitable purpose of providing medical aid. MAP said at the time in a statement, “We take these allegations extremely seriously and we have contacted the Charity Commission about them.”The German Bank for Social Economy is also embroiled in questions over its possible connections to a BDS organization with links to the PFLP terrorist organization. Action Forum Israel, which was founded by Israelis living in Germany and by Germans, released a report on its website asking if the “Jewish Voice for a Just Peace fulfills the criteria of the bank [Bank for Social Economy] as a customer” in light of its connections to its self-described “sister organization.”Jewish Voice in the US supports the convicted Palestinian terrorist Rasmea Odeh. Harald Schmitz, the chairman of the Bank for Social Economy, declined to respond to Post press queries.Lahav Harkov contributed to this report.