The 18-year-old from the Nablus area stabbed four people in Tel Aviv while he was visiting with Natural Peace Tours. 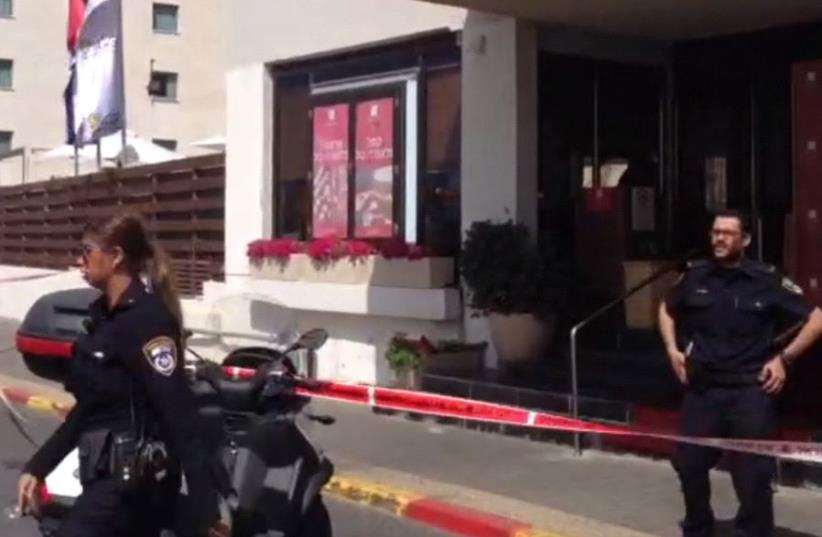 Palestinian terror attack leaves 4 wounded in Tel Aviv
(photo credit: AVRAHAM SASSONI)
Advertisement
Organizations promoting coexistence between Israelis and Palestinians are under increased public scrutiny after a Palestinian teenager visiting Tel Aviv with a coexistence organization stabbed four people on Sunday.The attacker, an 18-year-old from the Nablus area whose name remains under gag order, was visiting the coastal city with the NGO Natural Peace Tours. He received a one-day pass to enter Israel, provided by the Defense Ministry’s Coordinator of Government Activities in the Territories.Following the attack, the Defense Ministry suspended the visas, putting the work of many coexistence NGOs in jeopardy.“Of course it will effect our activities. On the other hand, it makes us increase our activities,” said Dr. Sapir Handelman, chairman of Minds of Peace, an NGO that has brought hundreds of Palestinians from the West Bank into Israel for grassroots Israeli-Palestinian negotiations.Handelman said the Defense Ministry was right to suspend the one-day permits his organization relies on, but he believes that they must reinstate the permits as a way to “release pressure.”“I sometimes don’t sleep at night,” Handelman said on Tuesday, adding that he often wonders if a similar incident could occur at a Minds of Peace of event, where many Palestinians and Israelis mingle together.“When you make peace activities, violence increases. However, on the other hand, these activities prevent violence [and] they release pressure,” Handleman remarked. “It is impossible to prevent violence hermetically.”Handleman’s next event, in which the NGO plans to bring some 100 Palestinian woman from the West Bank to meet Israeli women in Tel Aviv, is scheduled for May. He said the organization is working to increase security measures, but he contends that the major responsibility is in the hands of the authorities.According to a representative for Natural Peace Tours who spoke with Walla on Monday, the Palestinian attacker apparently left their tour group sometime after breakfast at Hayarkon Park. “I wish that we would have seen suspicions that this would happen, but there was simply nothing,” the representative said, adding that the attacker came from a “very respectable family, both financially and on a personal level.”A security camera recorded video of the teenager as he entered the Leonardo Beach Hotel at around 2:30 p.m., charged and attacked an employee, before assaulting others with a sharp instrument. One man in his 70s and three other victims in their 50s – two men and a woman – were evacuated with light injuries to Tel Aviv’s Sourasky Medical Center.Police quickly arrived, along with Shin Bet (Israel Security Agency) agents, arrested the suspect and began investigating the incident.