Commentary: To make peace in the Middle East, focus first on water

The logic of leading peace through water diplomacy is further strengthened when one considers the broader instability of the region. 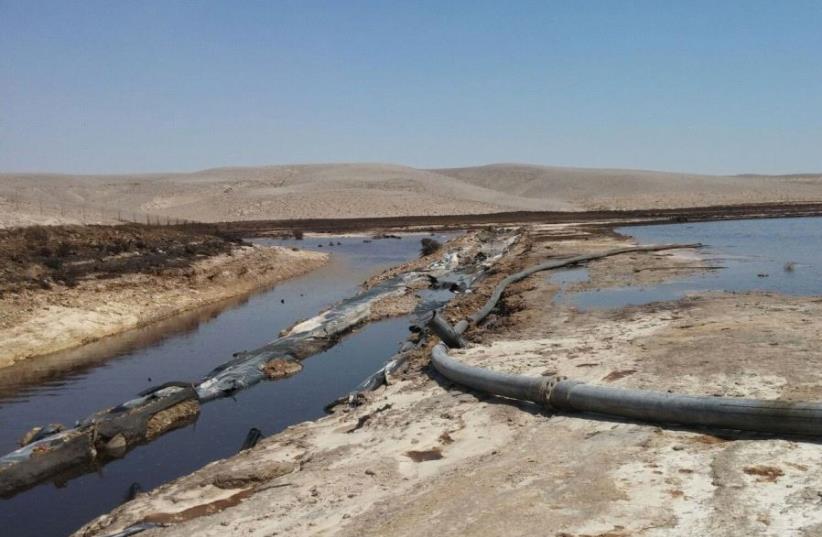 Industrial waste water contamination in Israel
(photo credit: ENVIRONMENT PROTECTION MINISTRY)
Advertisement
For the past 20 years, Israelis and Palestinians alike have approached peace negotiations with the flawed assumption that, in order to reach an agreement, all core issues must be solved simultaneously. As the conflict continues to claim victims on both sides, it’s important to point out that when President Trump’s Middle East envoy, Jason Greenblatt, was looking for an early success in the new administration’s peace efforts, he found it - in water.For Palestinian communities that suffer water shortages and require Israeli approval to increase pumping of shared natural water resources, an agreement to increase water sales from Israel to the Palestinian Authority by 50 percent annually will dramatically improve lives and livelihoods without creating water shortages on the Israeli side.This work to mediate peace through Israeli-Palestinian water sharing should be commended and continued. To ensure that the United States does not undercut its own efforts, the Trump administration must reevaluate some of its Middle East policies from a water security perspective. For example, the draft Taylor Force Act, which prohibits American aid to the West Bank and Gaza, does not exempt water programs. How might cuts to UN Relief and Works Agency for Palestinian Refugees (UNRWA) funding impact a water crisis in Gaza that is already severe? Any further reduction in Palestinian access to water could destabilize the region.The United States clearly recognizes the importance of international water security, having recently released its Global Water Strategy, which coordinates the work of 16 US government agencies and private partners. The Israeli government recognizes water as a security issue as well, and that’s a potential game-changer in the context of the Israeli-Palestinian conflict. For the Palestinian government, the priority is to increase water provision to meet basic needs, supporting economic growth as well as its aspirations for a state with the right to access and develop its own resources.Israel is proud of its leading role in advancing technologies that can economically produce large quantities of drinking water from the salty Mediterranean. Today 70 percent of Israel’s drinking water is produced through desalinization and 85 percent of its wastewater is treated and reused to meet agricultural needs. Once-arid Israel no longer need suffer water shortages. A logical next step, beyond water sales, would be to negotiate a fair allocation of the natural water resources that Israelis and Palestinians share, thus solving one of the core issues plaguing the peace process.However, both sides have shortsightedly refused to negotiate over natural water reallocation, wanting any water deal to remain part of a negotiation on other final-status issues, like borders and refugees. Israeli politicians insist that a better water deal for the Palestinians must be matched by Palestinian compromises on refugees. Palestinian politicians argue that a fair water agreement would make the Israeli side look good, and say that they cannot afford to allow the need for a water deal to relieve pressure to resolve other issues. Both sides contend that, without also agreeing on borders and settlements, they will not know which natural water resources belong to whom.These arguments ring hollow and, for both sides, the costs of continuing to hold water hostage are simply too high. Water, like money, is fungible.As long as all agree that negotiating over water rights involves cross-border waters (the Coastal Aquifer lies beneath parts of Israel and all of Gaza, the Mountain Aquifer underlies Israel and the West Bank, and the Jordan River shares borders) borders, settlements, refugees, and security arrangements are not issues that must be determined in advance of a water agreement.The clock is ticking. Climate change, decreasing natural waters, and increasing pollution are all taking their toll. In the West Bank, some 60 million cubic meters of untreated sewage pollute the Mountain and Coastal Aquifers, streams and the Mediterranean Sea annually. In Gaza, the flood of untreated sewage is so great that groundwater is no longer potable, and most beaches in Gaza and some in neighboring Israel have been forced to close. Twice, Gaza’s sewage crisis has necessitated the shutdown of a nearby Israeli desalination plant, threatening the very technology that can ensure the region has enough water.Lack of access to safe water and inadequate sanitation leads to the spread of preventable diseases, none of which recognize political borders, as untreated wastewater flows into cross-border streams and valleys, and the Jordan River. Israeli Prime Minister Benjamin Netanyahu has expressed concern about the risk of an epidemic of cholera, or another infectious disease, in Gaza, and argued for the provision of more quality water in order to avoid public health, environmental and national security threats to Israel.The logic of leading peace through water diplomacy is further strengthened when one considers the broader instability of the region. Advancing regional water projects such as a master plan for the development of water and sanitation in the Jordan Valley, and an increased water trade that does not sacrifice water rights, present more opportunities to help stabilize the situation. Water scarcity was a causal element of the conflict in Syria and, now, with Syrian refugees flooding into neighboring Jordan, economic opportunities for both the refugees and the local population are paramount if we are to avoid further regional unrest. Water is required.Clearly, the fair and efficient allocation of the region’s fresh water could unlock an important path to greater stability. Conversely, the sustainability of any Middle East peace agreement will be compromised if water resources are not allocated fairly and managed efficiently.We urge the Trump administration to think outside the box and, in the interests of a more stable Middle East, to prioritize water projects. Israelis and Palestinians need a sustainable path to peace based on mutual respect and recognition. By advancing a policy that impacts every life, every day, we can restore hope in the possibility of peace, one glass at a time.