Though the exact charges and the names of the suspects are under a gag order, both are expected to be indicted in the next few days for their roles in the arson attack on the Dawabsha family. 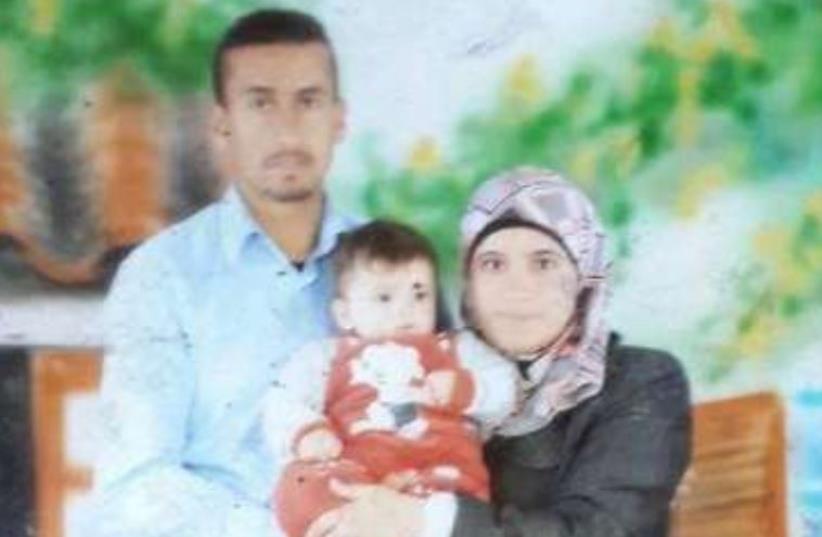 Riham Dawabshe (right) with her family
(photo credit: ARAB SOCIAL MEDIA)
Advertisement
Pre-indictment motions were presented in the Petah Tikva Magistrate’s Court on Wednesday against two of the suspects in the arson attack that killed three members of a Palestinian family in the West Bank in July.Though the exact charges and the names and details of the suspects are under a gag order, both are expected to be indicted in the next few days for their roles in the arson attack on the Dawabsha family home in Duma that killed 18-month-old Ali and his parents, Sa’ad and Riham.On Wednesday, the remand of one of the two suspects was also extended.Deputy Attorney-General Raz Nizri said Wednesday that claims that the Duma suspects were tortured during interrogations were “ridiculous and baseless.”Nizri put forward his position in a letter responding to Honenu lawyer Adi Kedar, who objected to a recent visit Nizri paid to detained Duma suspects without Kedar present.Nizri rejected Kedar’s objections to the visit, during which, he said, he inspected the condition of the Duma suspects at the Shin Bet’s (Israel Security Agency’s) interrogation facility on Saturday night.Early Monday morning, Kedar accused Nizri of violating his clients’ rights by speaking with the defendants without the presence of their counsel.For weeks, there has been a public battle between supporters of the suspects and the Shin Bet over which interrogation tactics the agency is using and is allowed to use to extract information from the suspects and over denying the suspects the right to meet with their lawyer.Kedar said he viewed the visit “gravely” since “we are at the stage of investigation in which preventing meeting with lawyers has been removed and all the movements and interrogations of my client are coordinated” with him.“It was not made clear to me under what authority my colleague decided to inspect my client,” he continued, “and this without any coordination.”Homing in on what he viewed as suspicious circumstances, Kedar stated: “We are not speaking of a courtesy visit or general happenstance visit to the Shin Bet’s facility.”Explaining his objection further, he implied that Nizri had visited his clients to influence them not to cooperate with complaints that Kedar filed on Sunday with the new Justice Ministry inspector against the agency for allegedly torturing his clients during interrogations.Nizri flat-out dismissed the objections as wrongheaded and misguided.He doubled down on the Justice Ministry’s explanation of the visit, stating that he is an official inspector of Shin Bet and police facilities, and that in that role he has the authority to perform such inspections at anytime.Next, Nizri said he and his staff visit the various facilities on a periodic basis and that all allegations that he had violated Kedar’s clients’ rights for Kedar to be present were “completely groundless.”Further, the visit was ordered by Attorney-General Yehuda Weinstein.But Nizri’s letter also added new details. He wrote that a lawyer on his staff had been present for all conversations with detainees and recorded the conversations.The deputy attorney-general described the conversations as being limited to giving the detainees a chance to be heard on their complaints about the detention and interrogation conditions.Nizri said he started each conversation by specifically asking detainees not to talk about the charges against them, while introducing himself in his role as an inspector.Most importantly, Nizri said a full report of his visit would be sent to the Justice Ministry’s head of investigating complaints against the Shin Bet, who would review any problems.Without going into more detail, Nizri added that the complaints he received from the detainees themselves were far less serious than those being expressed publicly in their names.Media coverage of the visit has been confusing since many do not understand the difference between the prosecutorial arm and advisory arm of the Attorney-General’s Office.Whereas it would be prohibited for a state prosecutor to visit Kedar’s clients without his presence or approval, Nizri is not a prosecutor and cannot have a role in prosecuting a specific case.At the same time, he has been the face of the Attorney-General’s Office, approving and explaining legal policy decisions on how the detainees are interrogated, when they can meet with their lawyers and their being held in administrative detention.Despite that involvement, he is still not a prosecutor, and visiting as an inspector does not violate any law.However, if Kedar can show that Nizri went beyond his purview of checking on the detainees’ health, by obstructing their complaints about their treatment, an obstruction charge could stick.