"To be critical of a country’s policies is not to demand the unique kind of moral capital punishment of BDS,” says Dershowitz.

By DANIEL K. EISENBUD
JUNE 9, 2015 02:04
Boycott Israel sign
(photo credit: REUTERS)
Advertisement
Citing a litany of nations across the globe guilty of egregious human rights offenses that have not been subjected to international boycotts, renowned jurist Alan Dershowitz lambasted the BDS movement at a B’nai B’rith International ceremony honoring Israeli journalists Monday night.“Whenever I debate BDS, I always throw out the following challenge to my students all over the world,” Dershowitz told International Jerusalem Post editor Liat Collins in an on-stage interview at Jerusalem’s Van Leer Jerusalem Institute.“Name a single country in the history of the world faced with internal and external threats comparable to those faced by Israel that has ever had a better record in human rights; a better record with compliance of the rule of law; a better record of concern for civilians?“I have been asking that question now for 20 years probably to a million people around the world, and I’ve never gotten a single person even to stand up and name a country, because you can’t do it.”Moreover, Dershowitz argued that the issue is not about BDS in itself, but rather “the singularity of directing that sanction against the most democratic state in the Middle East – one of the most democratic states in the world.”“Is Israel perfect? Of course not,” he continued. “Were I an Israeli citizen, I’d feel perfectly entitled to be critical of Israel’s polices in many regards, as I am very critical of America’s policies. But to be critical of a country’s policies is not to demand the unique kind of moral capital punishment of BDS.” Noting that the sophistication of the movement has advanced considerably, Dershowitz emphasized that it is incumbent upon pro-Israel advocates to do more to “prove and demonstrate that those on the side of BDS are not only the wrong side of morality, but of the peace process.”“The BDS movement is antagonistic to peace,” he told Collins. “It makes it harder for the Palestinians to come to the bargaining table.”Prior to Dershowitz’s statements, Sam Sokol, The Jerusalem Post’s Jewish World correspondent, was recognized for journalistic excellence at the organization’s annual World Center Award for Journalism Recognizing Excellence in Diaspora Reportage ceremony. 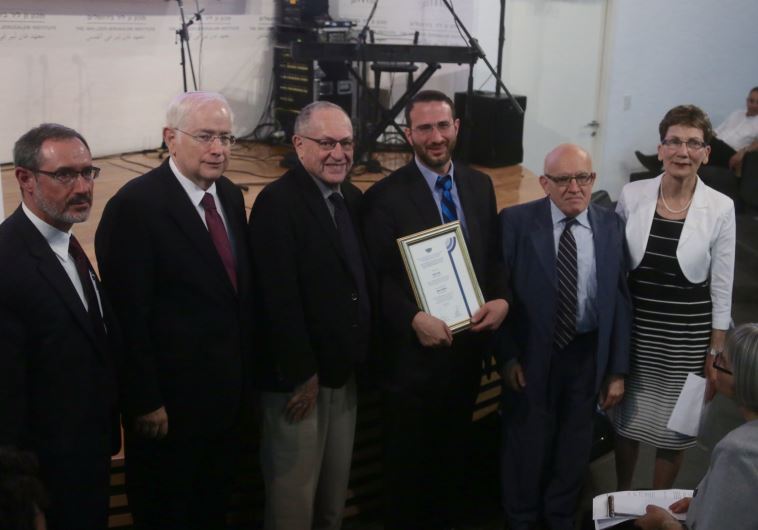 Jerusalem Post Writer Sam Sokol receives B’nai B’rith award (Picture: Marc Israel Sallem)“I’m very very honored,” said Sokol of the award honoring his reporting from the Ukraine.“It’s very humbling and really feels like a vindication that people have appreciated what I’ve done, and that’s really gratifying.”Sokol continued, “I’ve worked very hard to try to raise awareness of the issues that I write about, and to know that people have appreciated that and responded to that really means a lot.”Channel 10’s chief international correspondent Nadav Eyal also received an award for excellence in Diaspora reporting, while a special citation for contribution to Israel-Diaspora Relations through the arts was presented to acclaimed singer David D’Or, who also performed.Additionally, a lifetime achievement award was presented to “Kol Yisrael,” the Voice of Israel Radio, for its long-running program “Searching for Missing Relatives.”