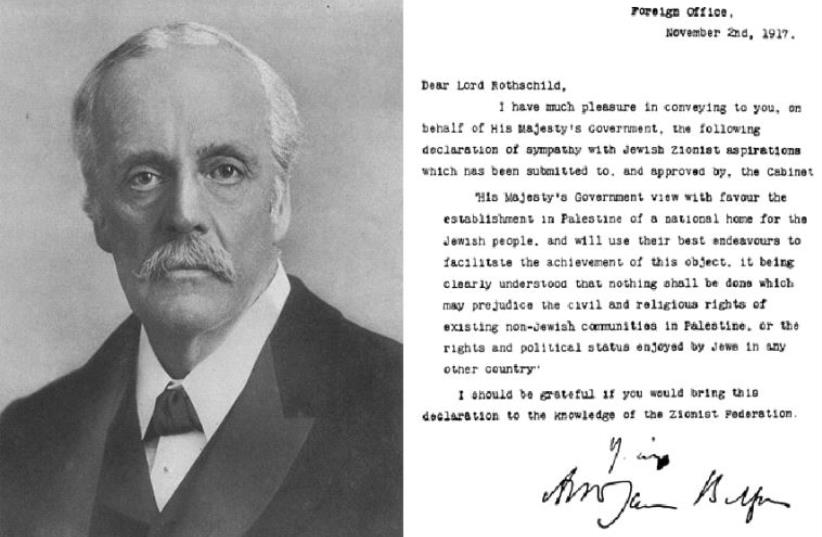 Lord Arthur James Balfour and the text of the Balfour Declaration
(photo credit: WIKIMEDIA)
Advertisement
WINDSOR – The 5th earl of Balfour Roderick Balfour expressed hope that a two-state solution could be achieved this year, as he conveyed pride in his family’s legacy, the centenary of which was celebrated at Limmud FSU in Windsor this weekend.The Balfour Declaration, dated November 2, 1917, was sent by Lord Roderick Balfour's relative, former British foreign secretary Arthur James Balfour to Baron Lionel Walter Rothschild. It expressed Britain’s support for the establishment of a homeland for the Jewish people in Israel.The text of the letter was incorporated into the Treaty of Sevres with the Ottoman Empire and the Mandate for Palestine.“I am very honored to hear that an element of your symposium will be a commemoration of the Centenary of the Balfour Declaration,” Balfour said in a special message to the conference, which was read out during a festive gala on Saturday night.An exhibition about the Balfour Declaration was displayed throughout the event (the first Limmud FSU ever to be held in Europe), which drew some 700 Russian-speaking Jews to the UK from more than 20 European countries for three days of intensive Jewish learning.“My family is very proud of the importance to Jewish people everywhere of this initiative by the British government of the day,” the letter read. “The relevance to you all here today is that the imperative for it stemmed from the appalling Russian pogroms at the turn of the 20th century. Thus, and this what we are most proud of, the declaration was first and foremost a humanitarian act trying repatriate a talented but much-persecuted people to the land of the original Judaic roots.”In October, a campaign was launched at an event hosted at the British Parliament’s House of Lords, calling on the UK to apologize for the declaration. A petition for a British apology and compensation for the Palestinians garnered only 1,278 supporters, failing to meet the 10,000 signatures in six months required to merit a response from the Parliament. Balfour described blaming the declaration for political turmoil in the Middle East as “over-simplistic.”“The borders imposed by Sykes-Picot were never going to be fit for purpose and nobody in 1917 could have foreseen the Holocaust or the extraordinarily high birth rate among the Palestinians in recent decades,” his letter read.“How much more we could celebrate the centenary if we saw a two-state solution emerge this year, which in effect would bring closure on one of the central tenets of the declaration,” he concluded.During the event, Limmud FSU bestowed an Honorary Balfour Declaration Award upon Board of Deputies of British Jews President Jonathan Arkush for his contributions to British Jewry.Correction: A previous version of this article mistakenly stated that Roderick Balfour was the great-grandson of Lord Balfour.