Gov't sources: Israel only banned diplomatic talks with a Palestinian Authority that ‘relies’ on Hamas. 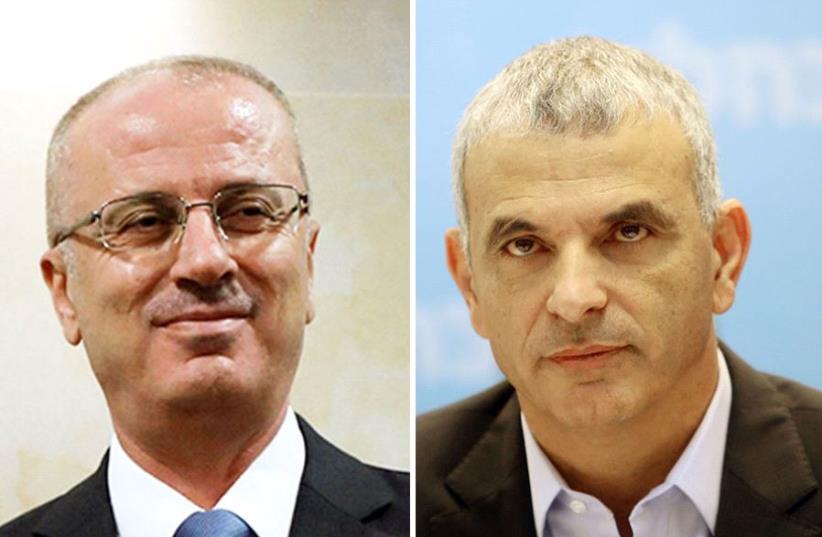 Hamdallah and Kahlon
(photo credit: MARC ISRAEL SELLEM,REUTERS)
Advertisement
Israel has not ruled out all contact with a Palestinian government that relies on Hamas for support, only diplomatic negotiations, a government source indicated Monday following reports that Israel and the PA held a high-level meeting on Sunday.Despite Israeli anger at the recent Hamas-Fatah reconciliation agreement, Finance Minister Moshe Kahlon met Sunday in Ramallah with Palestinian Authority Prime Minister Rami Hamdallah, a Palestinian source confirmed to The Jerusalem Post Monday morning.Kahlon was joined by the coordinator of government activities in the territories, Yoav (Poli) Mordechai. In attendance were also Kahlon's Palestinian counterpart, Shukri Bashara, as well as head of the Palestinian Civil Affairs Authority Hussein A-Sheikh and Palestinian intelligence service head Maj.-Gen. Majid Faraj.US President Donald Trump's adviser on Israel who has been visiting the region with increasing frequency in recent months to boost efforts to broker a peace deal lauded both the Israeli and Palestinian party for holding Monday's parley.


"Important progress last night between Israeli & Palestinian sides led by @RamiHamdallah & KahlonMoshe & Gen Mordechai of @Cogat_Israel," Greenblatt commended on all the participants in a tweet he penned.
Palestinian rivals Fatah, Hamas sign reconciliation accord, October 12 2017.
According to Palestinian news agency Wafa, among the topics discussed in the meeting were Israel's settlement enterprise and the PA's demand that the Jewish state lift off the siege on the Gaza Strip. Water and electricity issues were also part of the conversation, including a discussion on a new trade agreement to regulate the passage of the aforementioned from Israel into Gaza. Another issue that was discussed was trade between Israel and the PA, with a focus on the banking relationship between Israeli and Palestinian banks. The Palestinians requested that projects in Area C of the West Bank be promoted and also pushed for an establishment of an industrial zone that was previously agreed upon. The meeting came just two weeks after the Security Cabinet decided that Israel would not conduct diplomatic negotiations with a Palestinian government that “relies” on Hamas unless Hamas disarmed and accepted a number of conditions, including recognizing Israel, disavowing terrorism, and accepting previous Israeli-Palestinian agreements.
Kahlon's meeting came before a new Hamas-Fatah government was formally put into place. Furthermore, according to a government source, the security cabinet decision specified that Israel would not hold diplomatic negotiations with a Fatah-Hamas government. The carefully worded statement did not rule out any and all contact with a unity government.Education and Diaspora Affairs Minister Naftali Bennett, a member of the security cabinet, had demanded that Israel sever all ties with the PA as a result of the pact that he said turned it into a “terrorist authority,”  but that position was not accepted. Kahlon meets periodically with senior PA officials, and last met Hamdallah at the end of May to brief him on steps the security cabinet decided to take following the visit of US President Donald Trump – just a week earlier – to improve the situation with the PA. The two are reported to have discussed economic matters and Palestinian movement in the area, including the possibility of opening the Allenby Bridge border crossing at all hours for a limited period of time. The pair were expected to meet again a few weeks later, but their meeting was called off after Hadas Malka, a 23-year-old border policewoman, was stabbed to death by a Palestinian terrorist outside Jerusalem's Damascus Gate on June 17 in a high-profile attack that escalated the diplomatic rapport between Israel and the Palestinians. A month before that initial meeting with Hamdallah, Kahlon met the PA's Finance Minister Shukri Bishara.It was not immediately clear whether his meeting on Sunday with Hamdallah was coordinated with the Prime Minister's Office in advance, though his last meeting was approved both by Prime Minister Benjamin Netanyahu and Defense Minister Avigdor Liberman. Adam Rasgon and JPost.com Staff contributed to this report.