"Those were assurances that were given to me in the most recent trip to Bethlehem." 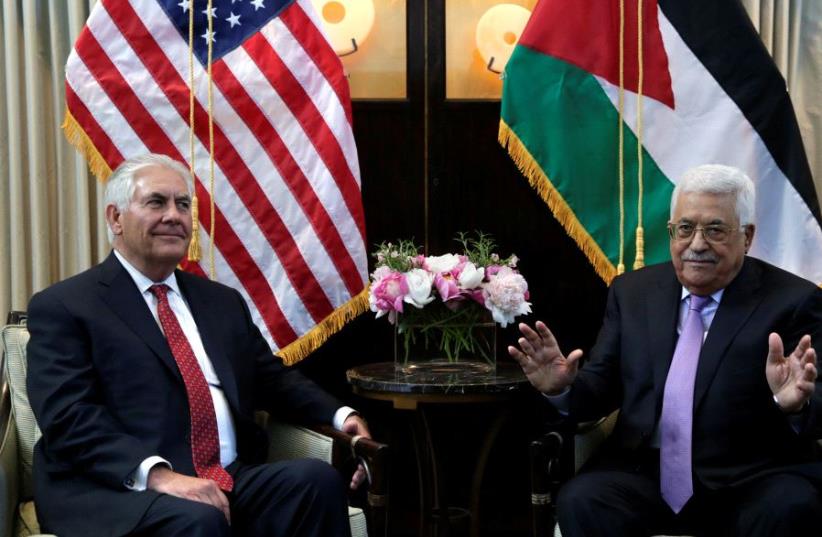 Secretary of State Rex Tillerson meets with Palestinian President Mahmoud Abbas
(photo credit: REUTERS/YURI GRIPAS/FILE PHOTO)
Advertisement
WASHINGTON -- US Secretary of State Rex Tillerson repeated on Wednesday that Palestinian officials had told him privately they would change their controversial policy of compensating assailants convicted in Israel of murder and terrorism with monthly stipends, despite denials from senior members of the Palestinian Authority.Testifying before the House Foreign Affairs Committee, Tillerson recounted a private meeting he had with PA officials in Bethlehem during US President Donald Trump's May visit to the region. The president made clear his opposition to the program, and the secretary said he personally relayed the administration's deep concerns.Tillerson said the PA would end its direct compensation of assailants of terrorist attacks, but added: "Widows and orphans is one thing."
PM Netanyahu: Israel condemns terror, Palestinian Authority praises it
"Those were assurances that were given to me in the most recent trip to Bethlehem," Tillerson said. "They have indicated they would, they have indicated to me they were in the process of changing that."The Israeli government has characterized the 'martyr compensation' scheme as inhumane and an impediment to peace, but the PA says the program supports families of legitimate combatants.In negotiating an end to the program, Tillerson said the US was "setting the stage for a reengagement on the peace process with the Israelis." Trump is working to bring both sides around the same table by the end of the summer.Tillerson testified before a Senate panel one day prior, where he initially suggested that the Palestinians had already changed their policy. Israeli and Palestinian officials alike disputed this claim."We will continue this dialogue with them," said Tillerson, who told the committee that Trump has a "certain window of patience" on the matter."At some point," Tillerson added, "he's going to become disinterested."