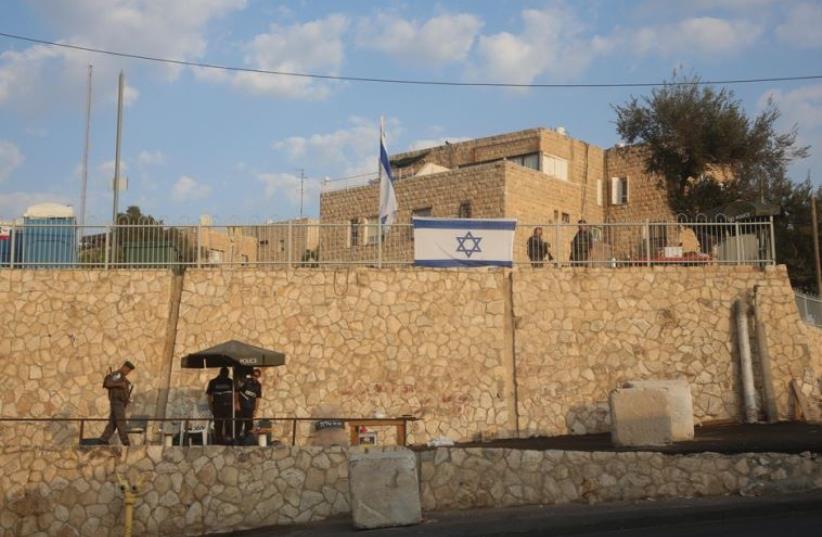 Border Police man the area separating the east Jerusalem neighborhoods of Armon Hanatziv and Jebl Mukaber
(photo credit: MARC ISRAEL SELLEM)
Advertisement
The united model of Jerusalem has unequivocally failed and violence will not abate on a meaningful level until the capital is divided into two mutually autonomous municipalities, the city’s former east Jerusalem portfolio holder contended on Sunday.Dr. Meir Margalit, who remains on Meretz’s leadership committee and works as a researcher at the Van Leer Institute, said the government and Jerusalem Municipality must come to terms with this assertion if a sustainable peace is to be found.
Does residency revocation=dividing Jerusalem?
“We must realize that the former model of a ‘united city’ has collapsed,” Margalit said by phone. “If we do not understand this simple fact, we cannot start talking about an alternate model.”According to the former councilman, the current Palestinian uprising has been fueled largely by a collective sense of disenfranchisement coupled with an “institutionalized racism” that is most acutely felt by a new generation of disaffected Palestinian youths.“What the Palestinians are saying to us through this violent uprising is that they want to be the managers of their own lives,” he said.“They will no longer accept being managed like puppets by the Israeli government, and will no longer accept being humiliated on a daily basis by the Israeli establishment – especially the Interior Ministry and Border Police.”More than anything, Margalit continued, “they want dignity.”“The Israeli establishment, as of now, is unable to give them the dignity they need,” he said. “The government and municipality are unable to treat them with dignity because discrimination is an integral part of the Israeli legal system.”To illustrate this point, Margalit cited the fact that the vast majority of Arabs living in Jerusalem are considered “residents,” while Jews are considered “citizens.”And, while he conceded that Palestinians do, in fact, have the right to become full Israeli citizens – according to the Interior Ministry, 24,000 of the 300,000 Palestinians living in the capital have citizenship – he emphasized that doing so is legally difficult and frowned upon by their peers.“[The process] is so complicated that it’s almost impossible, due to the fact that to get Israeli citizenship they must give up Jordanian citizenship because, according to international law, they are considered Jordanian citizens,” he explained.Moreover, Margalit said the Jordanian government makes renouncing citizenship an extraordinarily difficult and protracted process. This obstacle, he added, is exacerbated by Palestinians with resident status who largely view Arabs who become Israeli citizens as collaborators.Nonetheless, he contended that any kind of inferior legal status or treatment faced by Palestinian residents who do become Israeli citizens, is problematic in itself.“It is proof that the legal status of Palestinians is inferior to the legal status of Jews,” he said. “So there is proof that discrimination is in our government’s DNA and the new generation of Palestinians in Jerusalem has said: ‘No more.’” Making matters more complex, Margalit asserted, is that the government and municipality send the message that “Arabs are not welcome in the city.”“This is the message the government is sending to Palestinians by ignoring their legitimate needs and neglecting their neighborhoods,” he said. “So, the Palestinians don’t want the Israeli government managing their lives, and the Israeli government doesn’t want them here.”Therefore, Margalit concluded, the question is: “Why continue a model that is not good for them, or for us?” “The conclusion must be that we need a new model,” he said. “A division of the city that gives the Palestinians autonomy to manage themselves on the ground.”Noting that physically dividing the capital would be impractical, if not impossible, Margalit argued that a “functional division” must be implemented through the creation of two autonomous Arab and Jewish municipalities.“It’s impossible to physically divide the city,” he said. “Instead of walls, the idea is to create Palestinian neighborhoods that will become part of the ‘Palestinian Municipality of Jerusalem,’ and Jewish neighborhoods will remain the Israeli Municipality of Jerusalem.“So, in one [physically] united city, there will be two municipalities, and the same city will become the capital of two nations.”While Margalit acknowledged the inherent complexity and inevitable political push back that such a proposal would engender, he said forlornly that leaders must begin “to think outside the box.”“I recognize that it is a complicated model without precedent, but Jerusalem needs a lot of creativity right now,” he said. “You have to present new ideas. I believe this is the only way to bring a peaceful solution to the conflict.”In the meantime, Prime Minister Benjamin Netanyahu has been unequivocal in his stance that Jerusalem would never be divided in any peace deal with the Palestinians.