Egypt's ambassador to Israel: Peace between Egypt and Israel is strong, stable

Speaking at event marking 40th anniversary of Sadat's visit to Jerusalem, Israel's Ambassador says view of peace between the two countries is completely different in Egpyt than Israel. 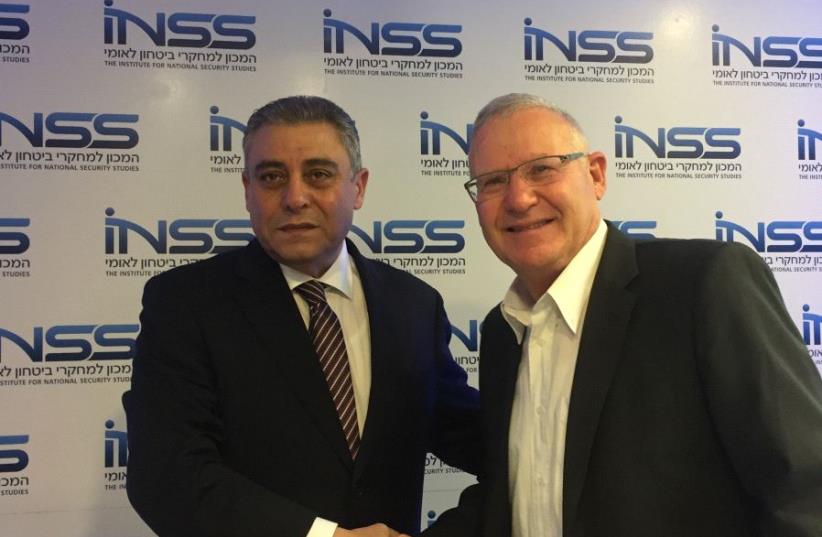 Egyptian Ambassordor Hazem Khairat With INSS' Amos Yadlin
(photo credit: ANNA AHRONHEIM)
Advertisement
Forty years after president Anwar Sadat made his historic visit to Jerusalem, and 38 years since the signing of a peace treaty between the two countries, Egypt’s ambassador to Israel has warned against continued settlement building, saying it threatens Israel’s security.“A viable Palestinian state cannot happen with continued settlement expansion,” Ambassador Hazem Khairat said at the Institute for National Security Studies in Tel Aviv on Thursday. The continued building of settlements, he said, “threatens Israel’s security as desperation and extremism is only fueled when this happens. The absence of hope increases tensions and could lead to violence which would only benefit the extremists on both sides.”A two-state solution is “the only possible way forward,” according to Khairat, and Cairo is ready to help the sides reach the necessary compromise, but the role of the international community, especially the US, is indispensable, he said.“We look forward to continue to work with our allies, especially the United States under President Donald Trump, because once there is peace between the Israelis and the Palestinians there will be regional security.”Khairat said that Sadat’s visit to Jerusalem “not only paved the way for four decades of bilateral peace but also initiated the entire peace process to solve the Arab-Israeli conflict."“Forty years ago no one thought Egypt and Israel could reach peace, but we did,” Khairat said, adding: “Our peace is just like a leaf of tree that needs to be taken care of in order to grow and flourish.”Also speaking at the event marking 40 years since Sadat’s visit, Israel’s Ambassador to Egypt David Govrin said, “Sadat’s visit to Israel was the beginning of a long road of peace between the two countries.”But Govrin was critical, noting that no Egyptian leader has come to Israel since that visit, except for president Hosni Mubarak, who came for the funeral for Yitzhak Rabin but made it clear that he only came for the funeral and not an official visit.Nevertheless, the ambassador admitted that there are “close ties” between Prime Minister Benjamin Netanyahu and Egyptian President Abdel Fatah al-Sisi that are “based on trust and mutual respect.”The joint effort to combat terrorism, such as that by Islamic State in Sinai, has brought about “unprecedented levels of collaboration,” he said, adding that “it is obvious that the two countries need to work together regarding security in the Sinai Peninsula.”But Govrin warned that if ties between the countries remain predominantly based on the military, over time peace between the two could erode.“The relations between Israel and Egypt rely to too great of an extent on the military leg. Peace needs to stand on two legs, the military and financial for the civilians if it to forge deep and true roots. It is only with a combination of the two that will ensure long-term cooperation.”Govrin said that the views of peace between the two countries are completely different in each; for Israel the objective of signing a peace treaty with Cairo was normalization (culture, financial, tourism), while for the Egyptians it was to put an end to war.“While we are getting closer and closer we are still not there yet,” the ambassador said, referring to a performance he attended a few months back at Egypt’s national theater where after the show the theater director was slammed in Egyptian media for not stopping the performance and throwing Govrin out.But, he said, there is hope in those who have grown up without wars fought between the two countries.“The young generation has not experienced war with Israel and is exposed to a whole new world of communication with modern media outlets. The Arab Spring also changed the national agenda in Egypt and the Palestinian issue was pushed to the side,” he said.The ambassador told the audience that a few months ago he went to the new Alexandria library, which houses the Sadat Museum. Calling that visit “very moving,” Govrin said when he was there he saw students learning about the peace treaty signed with Israel.“War can be avoided, but peace cannot be avoided,” he said.