Ex-IDF chief: Hezbollah knows price of a future war, so it won't start one

Israel, Gantz said, "has no interests beyond the northern and southern borders, other than security interests. If we are challenged, we will know how to deal with it." 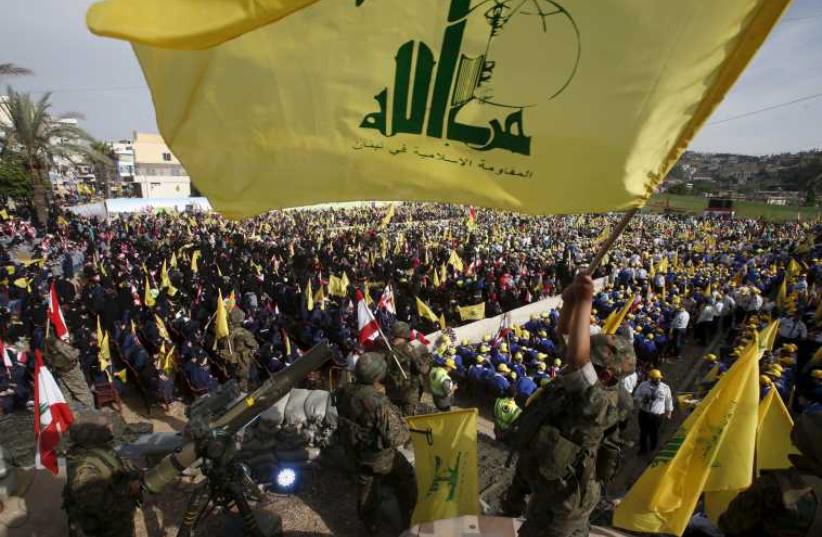 A Hezbollah member carries a Hezbollah flag while leader Hassan Nasrallah talks on a screen during a televised speech at a festival celebrating 'Resistance and Liberation Day'
(photo credit: REUTERS)
Advertisement
Hezbollah "understands well the price of a future war," and will not initiate one deliberately, Lt.-Gen. (res.) Benny Gantz, the former IDF chief of staff, told Israel Radio on Monday.During the interview, held to commemorate 15 years since the IDF's withdrawal from southern Lebanon, Gantz said: "Still, there is high sensitivity in the north. War can still occur because of local conditions. I know that the IDF is ready for any potential developments."Israel, Gantz said, "has no interests beyond the northern and southern borders, other than security interests. If we are challenged, we will know how to deal with it."Gantz, who was the former commander of the Lebanon Liaison Unit at the time of Israel's withdrawal, told Israel Radio that he thought the decision to leave Lebanon was the right one, though he added that it should have been carried out with "more coordination."Gantz entered Lebanon in March 1986, and left with the IDF, being the last member of the military to exit the country, exactly 15 years ago, in 2000. "I came in as a soldier, and left as a general," he said.The alternative to leaving Lebanon was staying with large numbers of units, said the former chief of staff. "Leaving unilaterally seemed like the right decision. Those were very difficult days. There are no happy withdrawals... [but] it was orderly, from logistical and operational perspectives," he added.He acknowledged that images of South Lebanese Army members lining up at border gates and undergoing checks by the Shin Bet were "not pleasant," but stated that the decision to pull the IDF out was "necessary.""The strategy was to cut our presence in southern Lebanon with a knife. That resulted in a cut to the noise [of daily security incidents]," Gantz added.Asked to comment on the 2006 Second Lebanon War, Gantz said that there "successes and mistakes," adding that nearly a decade after that conflict, "the inquiries into it have been completed."Hezbollah has, in recent years, grown stronger, with Syrian and Iranian backing, Gantz said, "particularly with long-range weapons that have varying precision. There is a focus [on the part of Hezbollah on entrenching itself within] Shi'ite civilian villages. There is no question it has grown stronger. But I also must emphasize that it has gotten busier in northern Lebanon and Syria."Ehud Barak, who served as prime minister and defense minister at the time and who initiated Israel's exit in 2000, told Israel Radio of his pride in his decision."In my eyes this is one of my important achievements," Barak said. "We stopped a tragedy that went on for 18 years, which started with the First Lebanon War in 1982."After 15 years in Lebanon, the IDF withdrew to the security strip, but soldiers continued losing their lives to Hezbollah attacks, Barak said. "We crossed the line of over 1,000 casualties. We could not defend the northern communities from any point in the security zone, even against the simplest threats of 107 mm rockets. During all of those years, it wasn't clear what the security zone did for the country," Barak said.Those considerations led him to decide on an exit from Lebanon within a year of being voted in, he added. "We were there for 15 years. Babies, who were born during our entry to Lebanon, almost became soldiers, and we were still there," Barak said.He recounted opponents who warned that the Galilee would come under continuous Hezbollah fire after Israel's withdrawal.  "We heard a vision, that they [Hezbollah] will fire on Metula and Hanita. They [IDF officials] left it on record, so that warnings would be written. I am not criticizing them now. Everyone was doing their job," he stated.Barak defended himself against criticism that the withdrawal left Hezbollah significantly stronger, saying, "Hezbollah grew stronger by our prolonged presence in Lebanon, not because of our exit. The quality of their explosives grew to the point that they began to resemble IDF explosive devices... After I left Lebanon, the north experienced seven years of quiet, the likes of which it had not seen since the Six Day War."The former prime minister dismissed the claim that Israel left without an arrangement, describing it as "folklore.""With the Lebanese government and Hezbollah, we could not make an arrangement. We made an arrangement with the UN Security Council, the only one with whom we could. It marked out the border. I insisted that we wait for an international body to complete the process of drawing a border, even though this stretched the IDF, so that we have legitimacy to defend ourselves [afterwards]," he added."It was essential to do this [the withdrawal] as a surprise. We could not share it with lower-ranking officers, or the SLA," Barak argued.Had Hezbollah gotten word of the planned move, it would have launched deadly attacks on the retreating Israeli forces, he said."How would the withdrawal have looked if soldiers had to search for body parts of friends [because Hezbollah would have attacked]?" Barak said.Asked to comment on the Second Lebanon War of 2006, Barak said it was launched recklessly and without the necessary prior calculations. "A country is not supposed to go to war without counting to ten, or because three soldiers were kidnapped and a tank drove over a mine," he said.