‘We want justice over what happened in Umm al-Hiran,’ says Amal Abu Saad 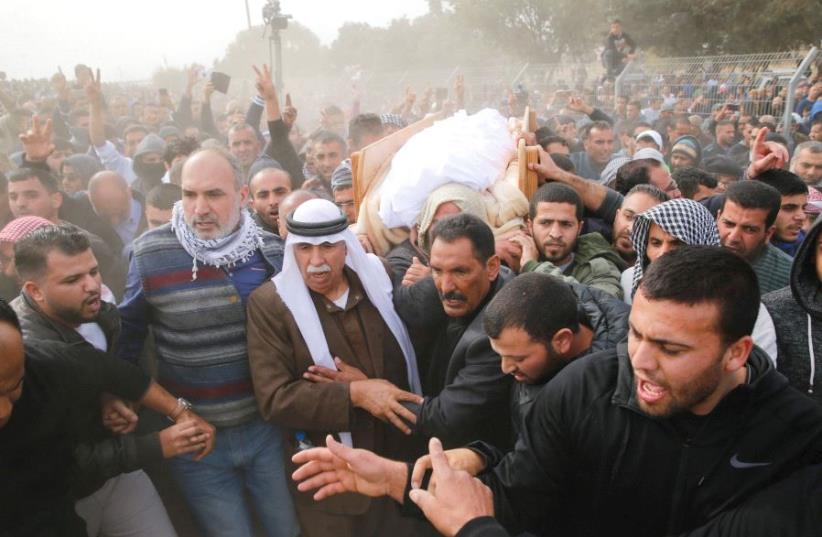 FRIENDS AND RELATIVES carry the body of Yacoub Abu al-Kiyan during his funeral in the Beduin village of Umm al-Hiran.
(photo credit: AMMAR AWAD/REUTERS)
Advertisement
Nearly three weeks after the controversial police demolition operation in the Negev Beduin village of Umm al-Hiran, the ex-wife of slain math teacher Yacoub Abu al-Kaeean is challenging Public Security Minister Gilad Erdan to furnish proof of his assertion that he was an ISIS terrorist who deliberately ran over policeman Erez Levi.“Erdan made a decision that he belongs to ISIS. He should get up and prove to people how he made that decision,” said Amal Abu Saad, the former wife of Abu al-Kaeean, who was branded an ISIS supporter by Erdan, Police Commissioner Roni Alsheich and Prime Minister Benjamin Netanyahu on January 18, the day police demolished ten homes in Umm al-Hiran in a bid to pressure residents to leave the village so that a new town can be built in its stead.According to police, Abu al-Kaeean drove into Levi intentionally and was shot by security forces. Eyewitness accounts and a police videotape appear to contradict the police version of events, showing that Abu al-Kaeean’s vehicle accelerated only after it came under fire from police. Umm al-Hiran residents allege that Abu al-Kaeean was shot without justification. Eyewitness testimonies and audio-visual evidence also raise suspicion that Abu al-Kaeean may have been shot by police while already incapacitated. Police say they are investigating that possibility along with other questions related to the incident.Abu Saad, who has a doctorate in biology from Ben-Gurion University and is a senior educator at Kaye Academic College of Education in Beersheba, where she oversees the program training kindergarten teachers, said: “A minister needs to stand behind what he says and it cannot be that he says in the first half hour after he is killed that he belongs to ISIS, that he investigated it and that the result is he is from ISIS. I demand that Erdan answer how he took an immediate position that he is from ISIS and what proof he has that he belonged to ISIS.’’ “I knew him well as the father of my daughters,” she said. “It doesn’t at all fit with the facts [that he belonged to ISIS]. He is a calm human being, quiet, modest, introverted and not violent. What ISIS does doesn’t fit in with our logic at all.”Abu Saad emerged at the forefront of a joint Arab-Jewish protest held in Tel Aviv Saturday night against discrimination and home demolitions that drew about 5,000 people, according to organizers. She gave the keynote speech, calling for the establishment of an independent inquiry commission into government and police decision making and actions surrounding the demolition of homes in Umm al-Hiran, including the house she lived in with her six children.“It’s new for me, I had never participated in a demonstration before. I was never involved in politics, I am busy with education and my children,” she told The Jerusalem Post at the house of Yacoub’s mother in the Beduin township of Hura, near Umm al-Hiran, where she has taken shelter with her six children. She spoke in a calm, low voice as the call to prayer resonated from a nearby mosque and insisted that her visitor drink sweetened tea.“Reality forced me to give the speech,” she said. “I wanted the whole world to hear me and especially the people of Israel, Arabs and Jews as one, to know we want justice over what happened in Umm al-Hiran. That we want an inquiry commission that will bring to light the truth about what happened with the killing of two Israeli citizens. I wanted to show that the state of Israel has to treat us equally as citizens, not enemies. We are law abiding citizens and can’t be enemies. There has to be one house in which everyone will live together in peace and equality.”The demolitions came as a follow up to a 2015 Supreme Court decision which found that the land on which the houses of Umm al-Hiran is built is state land despite the fact that the Umm al-Hiran families have been living there since they were forcibly relocated there by the army in 1956. With the demolitions, the state is trying to force all residents of Umm al-Hiran to relocate again – this time to Hura – on the state’s terms.The lives of Yacoub’s three daughters with Amal: Arij, eight, and Hala and Rina, twins who are seven, have been devastated by the events of January 18, Amal says. “It’s very hard for the girls... They saw him every day and played with him. It is hard for them to separate. All the time they are asking [about him], they go over the videos about Umm al-Hiran on Facebook and YouTube. The kids watch this all the time. They do not sleep at all.”Abu Saad said that the three girls and her other three children by an earlier marriage, all of whom lived with her in the demolished home, are being treated by psychologists. “Their house was destroyed. All the memories are buried underneath [the rubble], all our equipment was buried. There is nothing there today. No memories, no equipment, no anything.”Asked how she can comfort her children, Abu Saad replied: “There is nothing to comfort them with in this situation. They lost their father and also their home. There is nothing that can comfort them.”“They succeed in going to school,” she said. “I hope that when they are learning they at least are able to get out of our situation and learn. I hope they can succeed in doing that.”