Fatah calls for 'Day of Rage' in support of prisoners

More than a thousand Palestinian prisoners, led by Fatah leader Marwan Barghouti, who was convicted of five counts of murder, are carrying out a mass hunger strike in Israeli prisons. 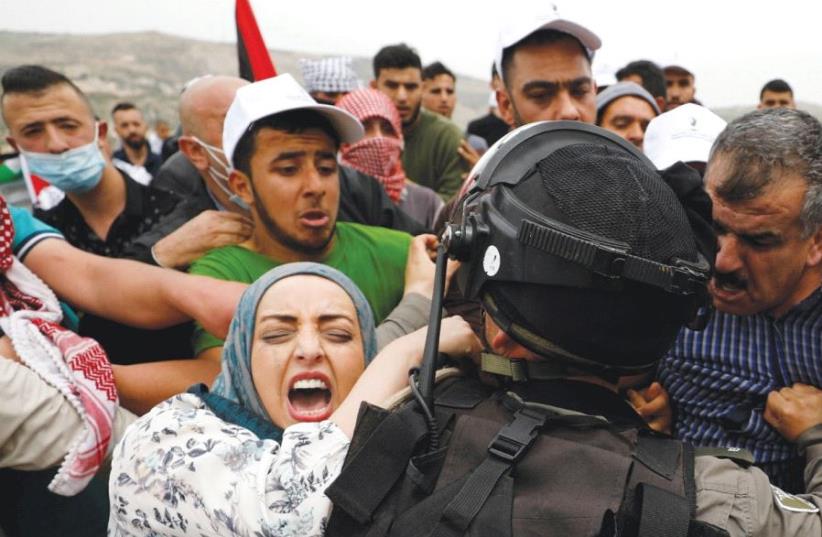 PALESTINIAN PROTESTERS clash with a soldier during a Land Day protest in Madama, south of Nablus.
(photo credit: REUTERS)
Advertisement
The West Bank’s ruling party Fatah called on Palestinians to participate in a day of rage this Friday in support of the hunger-striking Palestinian prisoners. Ma'an, a Palestinian news agency, reported on Saturday that Fatah is urging Palestinians “to clash with the occupier at all friction points.”
Palestinians hold rallies as hundreds of prisoners in Israeli jails begin a hunger strike (credit: REUTERS)
More than a thousand Palestinian prisoners, led by Fatah leader Marwan Barghouti, who was convicted of five counts of murder, are carrying out a mass hunger strike in Israeli prisons. The prisoners are demanding that the Israel Prison Service improve conditions in prisons pertaining to visitation rights, medical care, amenities and other issues. The Palestinian Authority security forces frequently block Palestinian protesters from reaching friction points with the IDF. It is unclear if the PA security forces will prevent protesters from accessing friction points of Friday. PA security forces spokesman Adnan al-Damiri did not respond to a request for comment. Fatah also called for a general strike on Thursday to support the hunger-strikers.