Abbas and Sisi met on Monday for the first time in 10 months in what several Egyptian and Palestinian media outlets dubbed a “reconciliation meeting.” 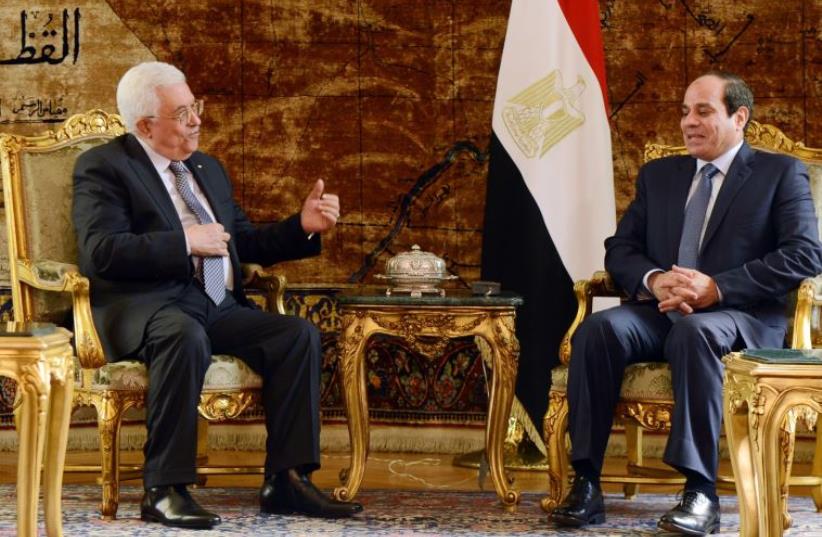 Egyptian President Abdel Fattah al-Sisi (R) meeting with Palestinian Authority President Mahmud Abbas in the Egyptian capital Cairo on November 8
(photo credit: AFP PHOTO)
Advertisement
The Egyptian and Palestinian Authority presidents have agreed to coordinate all steps on the Israeli-Palestinian peace process, a Fatah Central Committee member said after the two leaders met.“They both agreed to follow up with each other on all decisions pertaining to the peace process and a number of other matters,” Azzam al-Ahmad, who attended the Cairo meeting between PA President Mahmoud Abbas and Egyptian President Abdel Fattah al-Sisi, told The Jerusalem Post by phone on Monday.Abbas and Sisi met for the first time in 10 months in what several Egyptian and Palestinian media outlets dubbed a “reconciliation meeting.”Differences between the two over the past year led to a deterioration in ties between Ramallah and Cairo, culminating in Egyptian authorities in February barring the entry of top Fatah official Jibril Rajoub to the Egyptian capital.The main differences between the leaders pertain to Egypt’s close relationship with Abbas’s rival Muhammad Dahlan, Egypt’s decision to withdraw a UN Security Council resolution critical of settlements in December and Egyptian-Israeli coordination on the peace process, which did not include the Palestinian leadership.“The meeting was very positive and honest and there was mutual understanding between both parties,” Ahmad said, adding that all major issues pertaining to Palestinian- Egyptian relations were discussed, including Sisi’s visit to Washington in two weeks, Hamas-Fatah reconciliation and the Arab League summit in Jordan next week.
Trump Middle East Envoy Jason Greenblatt meets with PA President Abbas on March 14, 2017 (credit: REUTERS)
Ahmad said Abbas and Sisi also affirmed their support for the two-state solution and their opposition to settlements.Even though the Trump administration has not clearly stated if it supports a two-state solution, both the Egyptian and PA presidents have remained consistent in backing it as the only solution to the Israeli-Palestinian conflict.Regarding the issues that have caused tension between the two leaders, Ahmad did not confirm or deny if they were discussed. Instead, Ahmad said those issues are “now behind us.”Abbas also met with Egyptian Foreign Minister Samih Shukri on Sunday evening.The PA president is slated to hold meetings with his counterparts in Germany and Belgium over the next several days.