Fatah official: US ambassador to Israel not wanted in Ramallah

"He is the ambassador of America in Israel," official says, "and the purview of his work is in Israel." 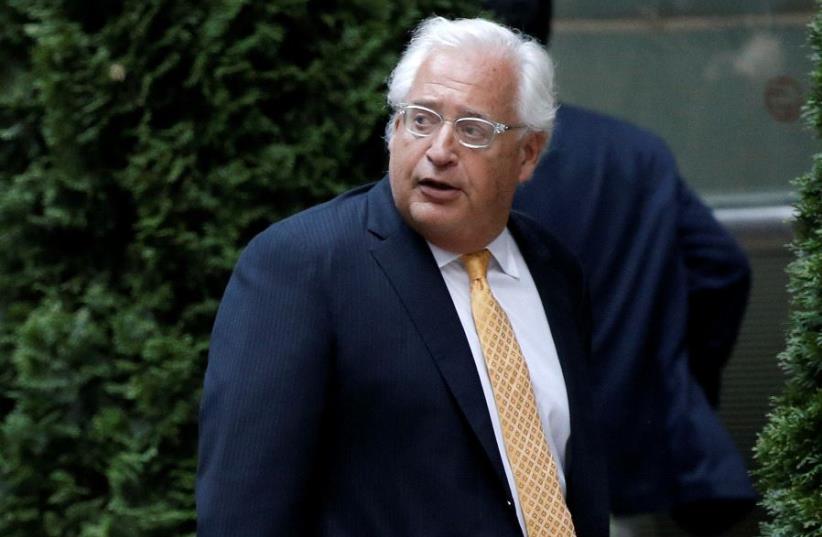 David Friedman
(photo credit: REUTERS)
Advertisement
Palestinian officials and US President Donald Trump’s peace envoy Jason Greenblatt will meet in Jerusalem on Tuesday because the Palestinians do not want US Ambassador to Israel David Friedman to come to Ramallah, Fatah Central Committee Member Azzam al-Ahmad said in a television interview.“Tomorrow there will be a new round of talks with the Palestinian delegation in West Jerusalem because we do not want one of the members of the [American] delegation to come to us…Why? Because he is the ambassador of America in Israel and the purview of his work is in Israel,” Ahmad said in an interview with the official Palestinian Authority television station on Monday.The interviewer then asked Ahmad if Friedman attending a meeting in Ramallah would send a political message. “Of course,” he responded, without explaining what such a message would be.The London-based al-Hayat reported in June that Abbas refused to welcome Friedman to Ramallah during a visit Trump's senior adviser Jared Kushner.The al-Hayat report said that Abbas did not want to host Friedman in the de facto Palestinian political capital over his support for settlements. Prior to being appointed the US ambassador to Israel, Friedman was a strong advocate of the settlement enterprise and served as president of the American fundraising arm for Beit El's yeshiva where a building bears his family’s name. Greenblatt arrived in Israel on Monday and was expected to hold talks with Prime Minister Benjamin Netanyahu and Palestinian officials.A senior Palestinian official told The Jerusalem Post on Monday that the meeting between Greenblatt and Palestinian officials will take place at the King David Hotel. He also said that the Palestinian officials meeting Greeblatt include top Palestinian negotiator Saeb Erekat, PA General Intelligence Services chief Majid Faraj, and PA President Mahmoud Abbas’s economic adviser Muhammed Mustafa.A Palestinian official close to Abbas said that the Palestinians hope to hear how the US administrations plans to revive peace talks between Israel and the Palestinians. “We still have not heard in which framework the American administration plans to renew the peace process,” the official told the Post. “We hope that will be clarified in this meeting.”