Gaza-bound flotilla boat docks in Ashdod after interception by Israel

Navy escorts vessel as it arrives at the Israeli port without incident; no soldiers or activists hurt. 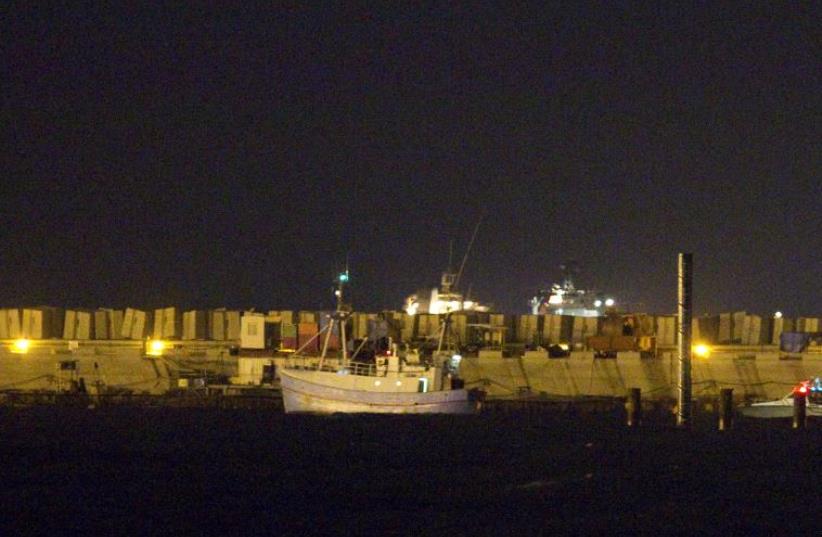 A pro-Palestinian ship named 'Marianne' is escorted to Ashdod port in southern Israel after it was seized by the navy, June 29, 2015.
(photo credit: REUTERS)
Advertisement
Naval vessels towed the Swedish fishing boat Marianne av Göteborg into Ashdod Port on Monday night after commandos interdicted it without incident some 85 nautical miles off the Gaza Strip Coast less than 24 hours earlier.This “flotilla,” which managed to garner headlines in Israel over the last few days but was not a major story overseas, ended with a whimper, as three other vessels that set sail from Crete to document its journey turned back after the Marianne, with its 18 passengers, was stopped and boarded.
Gaza-bound flotilla boat docks in Ashdod after interception by Israel
Defense Minister Moshe Ya’alon, who called the operation a “success,” said the navy had to tow the vessel, because its passengers had sabotaged the engine after the IDF naval commandos boarded.The Population, Immigration, and Borders Authority sent out a statement just before 10:30 Monday night saying that it had received at its offices at the Ashdod Port 16 foreign nationals who will be taken for questioning, and then the deportation process for them will begin.
Netanyahu: "Hypocrisy" of flotilla participants only aides Hamas
“There is no humanitarian crisis in Gaza,” Ya’alon said, adding that he was not saying the situation there is either easy or simple. “This was a provocation.”Prime Minister Benjamin Netanyahu issued a statement commending the navy for its “determined and efficient action.”“This flotilla is nothing but a demonstration of hypocrisy and lies that is only assisting Hamas and ignores all of the horrors in our region,” he said, adding that a panel established by UN Secretary-General Ban Ki-moon determined that Israel’s blockade of Gaza is lawful.“Israel is a democracy that defends itself in accordance with international law,” he said. “We are not prepared to accept the entry of war matériel to the terrorist organizations in Gaza, as has been done by sea in the past.”He stressed that there is no “siege” of Gaza and that Israel assists in the transferring of thousands of tons of goods, material, and humanitarian aid to Gaza on a daily basis.The IDF issued a statement early Monday morning saying that, “upon receiving orders from the political echelon and after diplomatic efforts failed to get the ship to alter its course, naval commandos from the Shayetet 13 boarded it.”Among the Marianna’s passengers were MK Basel Ghattas (Joint Arab List) and former Tunisian president Moncef Marzouki. Several of the remaining passengers were journalists, according to a list published by the Freedom Flotilla Coalition, the group that organized the flotilla.The group said Monday that, at around 2:00 a.m., the Marianne contacted it and told it that three Israel Navy boats had surrounded the vessel in international waters, some 100 nautical miles from the Gaza coast.The Freedom Flotilla Coalition said it then lost contact with the vessel, and that the next word it received was three hours later, when the IDF announced that the boat had been stopped.