Danon accuses Kuwait of "hijacking" meeting, says Israelis "barred from taking part in the deliberations due to the observance of our religious holiday.” 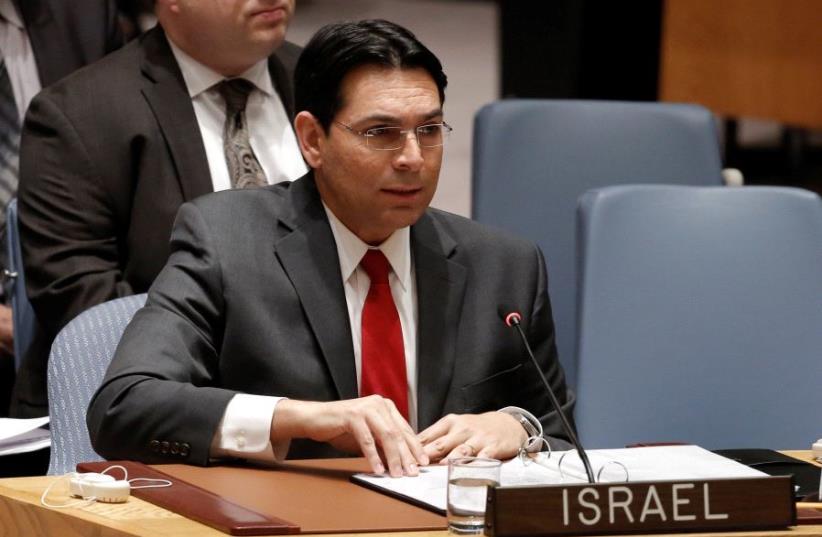 Israeli Ambassador to the United Nations Danny Danon addresses the Security Council.
(photo credit: UN PHOTO)
Advertisement
Israel’s Ambassador to the United Nations Danny Danon on Saturday lodged an official complaint with the United Nations Security Council for holding its emergency session on the situation in Gaza during the first night of the Passover holiday.
Palestinians mark "Land Day" with protests on Israel-Gaza border (Reuters)
The emergency meeting was called by Security Council member Kuwait in the wake of the violence that unfolded Friday, including the death of more than a dozen Palestinians in clashes with IDF troops amid a mass protest on the Israel-Gaza border.The Security Council meeting took place on Friday evening, when Jews worldwide were sitting down to the traditional holiday feast. The Israeli delegation was not in attendance, due to its members' observance of the Jewish holiday, during which work is prohibited.“The State of Kuwait, with full knowledge that our permanent mission, Israel and Jews everywhere were observing the first night of Passover, hijacked the consultations, forced an open session and invited the Palestinian delegation to present remarks that they had been advised to prepare well in advance. Israel was not given the same advance notice and was barred from taking part in the deliberations due to the observance of our religious holiday,” wrote Ambassador Danon. “I would like to remind the Council that exploiting procedural rules so that one side can make its case while the other cannot is antithetical to the spirit of the United Nations and is a direct affront to the fundamental principles of honest deliberation.” Danon also railed against Hamas for what Israel sees as its role in encouraging violence among protesters.“Once again, Hamas has exploited women and children as human shields, including by dressing young children in military uniforms and arming them with guns and ammunition. Despite the Palestinian leadership’s insistence on the peaceful nature of these demonstrations, Hamas and its affiliated factions have interspersed armed terrorists amongst civilians, a number of whom were killed as a result of their direct attacks on Israeli positions,” Danon said.