By JPOST.COM STAFF
Defense Minister Moshe Ya'alon during a visit to the Israel Navy base
(photo credit: DEFENSE MINISTRY)
Advertisement
Operation Protective Edge is ongoing and the fighting could begin again if a diplomatic solution isn’t reached by midnight on Wednesday, Defense Minister Moshe Ya’alon said on Tuesday.“I don’t know if by Wednesday at midnight we’ll reach an agreement, I don’t know if we’ll need to extend the negotiations.It could be that once again the fighting will break out and we will shoot at them and carry out operations,” Ya’alon said at the navy base in Ashdod.“Protective Edge has still not ended, but there is no doubt that Hamas and the rest of the terrorist organizations in the Gaza Strip suffered a heavy blow,” he said. The damage caused to Hamas is greater than that which it suffered during Operation Cast Lead (December 2008-January 2009) or Operation Pillar of Defense (November 2012), and worse than the destruction caused to Hezbollah during the Second Lebanon War in the summer of 2006.“This is in terms of damage to their property, operation centers, buildings, launching sites, training centers, their bank, their government buildings and so forth,” Ya’alon said. “There is no doubt that the damage is immense.”He called on the navy to exercise vigilance, saying that attacks from the sea could continue if the fighting renews.At around the same time, a navy patrol vessel off Gaza fired into the air to stop a motor boat approaching the shore. The IDF Spokesman’s Office said the boat was trying to break the blockade."There is no doubt that the navy played a crucial role in damaging the Gazan terror networks and securing the western part of the Strip," the minister said, adding that its operations from both the land and sea were important successes. He lauded their "professionalism, determination and commitment throughout the conflict." 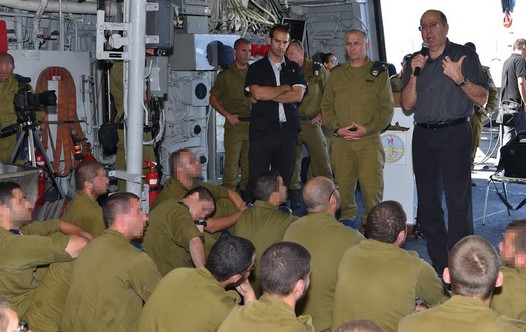 He commended the force for their alertness throughout the conflict and said that "as big as the army is, at times, the entire security of Israel rests solely on the shoulders of a single soldier. The defense chief mentioned the attempted infiltration from the Zikim Beach last month and thanked the naval force for neutralizing terror threats that would otherwise be tackled in "face-to-face" battles. Ya'alon's comments come a day after he said Israel would do whatever it could to return the remains of two IDF soldiers, St.-Sgt. Oron Shaul and Lt. Hadar Goldin, from the hands of Hamas.