Ashkelon, Ashdod, and the smaller communities near the Gaza border have absorbed the worst barrages since before dawn Wednesday.

By JPOST.COM STAFF, YAAKOV LAPPIN
Damage caused by rocket that hit house in Hof Ashkelon council
(photo credit: ISRAEL POLICE)
Advertisement
A rocket struck a home in the Ashkelon Coast Regional Council on Wednesday afternoon, causing some damage, but no injuries. The family was not home at the time of the attack.Since the collapse of the cease-fire, Palestinians in Gaza have launched dozens of rockets and mortars at Israel, pounding the western Negev. Ashkelon, Ashdod, and the smaller communities within just a few kilometers of the Gaza border have absorbed the worst barrages since before dawn on Wednesday. 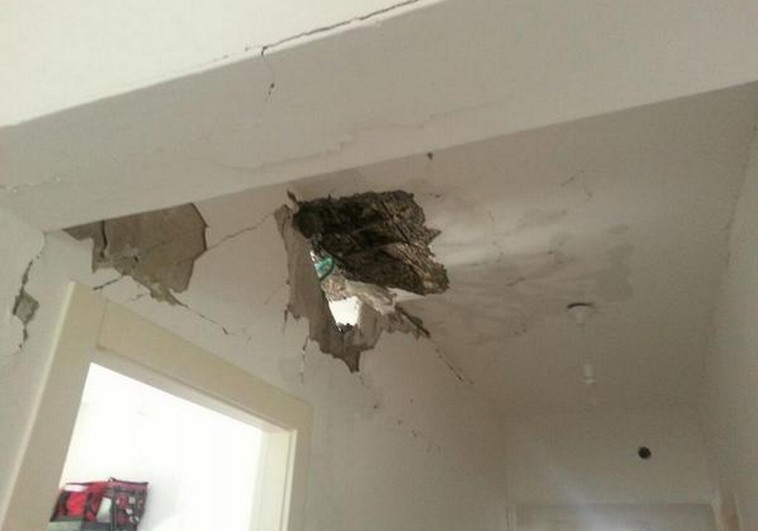 On Wednesday the IDF struck two terror operatives in Gaza who were responsible for earlier rocket fire on Ashkelon and Gaza frontier communities. The forces identified a successful hit on their targets.Terror groups in Gaza have fired more than 30 rockets since midnight, and the air force struck more than 50 targets. Iron Dome intercepted several projectiles over southern cities and towns, including Ashdod and Kiryat Gat.  Approximately 100 rockets have been fired in total since Hamas broke the cease-fire at 3:30 p.m. on Tuesday. Gaza medical officials reported that 16 people have been killed in Gaza since the renewal of hostilities.Hours after rockets shattered the cease-fire and hit Gaza frontier communities, three loud explosions were heard over Tel Aviv, shortly before 11 p.m., for the first time in over a week.In total, the IDF said 50 rockets were fired at Israel since 4:00 p.m. on Tuesday until around midnight. The Iron Dome rocket defense system intercepted six rockets.  Israeli media quoted Hamas as saying that the IAF attempted to assassinate its top militant leader, Mohammed Deif, in a Gaza City strike before the late night rocket barrage on Israel on Tuesday. It was not clear whether Deif, who has survived previous Israeli attacks, had survived the strike that killed a woman and a two-year-old girl who media reports said may have been his wife and daughter.Deif has topped Israel's wanted lists for years, as mastermind of deadly suicide bombings more than a decade ago. He is believed to be a behind-the-scenes leader of Hamas's campaign against Israel.Palestinian health officials said the strike on a house in Gaza City killed three people but did not provide any details about the third victim.On Wednesday a spokesman for Prime Minister Binyamin Netanyahu rejected Palestinian charges that Israel was to blame for a breakdown in ceasefire talks in Cairo, saying rocket fire from Gaza "made continuation of talks impossible."Spokesman Mark Regev responded to Palestinian negotiator Azzam al-Ahmad's charge that Israel had thwarted the talks that broke down on Tuesday after Israel recalled its negotiators from Egypt, accusing Hamas of violating a truce."The Cairo process was built on a total and complete cessation of all hostilities and so when rockets were fired from Gaza, not only was it a clear violation of the ceasefire but it also destroyed the premise upon which the talks were based," Regev said.Hamas claimed responsibility for the rocket attacks. It also said it launched a J-80 rocket at the Ben Gurion Airport, though there were no reported strikes near the airport. Rocket alert sirens were heard in Jerusalem, Beit Shemesh, Beersheba, Ashdod, Ashkelon, and in other communities. The IDF confirmed that a rocket fell in an open area of Jerusalem. One explosion in open territory in the greater Tel Aviv area was so far confirmed. Two rockets exploded in open areas of Sha'ar HaNegev. A rocket directed at the Ashkelon Coast Regional Council shortly before the latest salvo of rockets landed near a shopping center in the area. No injuries were reported but damage was caused to a building. Across the border, in Gaza, Palestinians reported a mounting number of injuries, following resumed air strikes on the Strip. Palestinian medical sources said three people were killed, including a three-year-old child, and 16 wounded, when an Israeli air strike hit a home in the Sheik Radwan neighborhood, north of Gaza City. The officials said ten other Palestinians were injured near a mosque in the same neighborhood.Reuters contributed to this report.