The former senior minister says both sides did not want a confrontation. 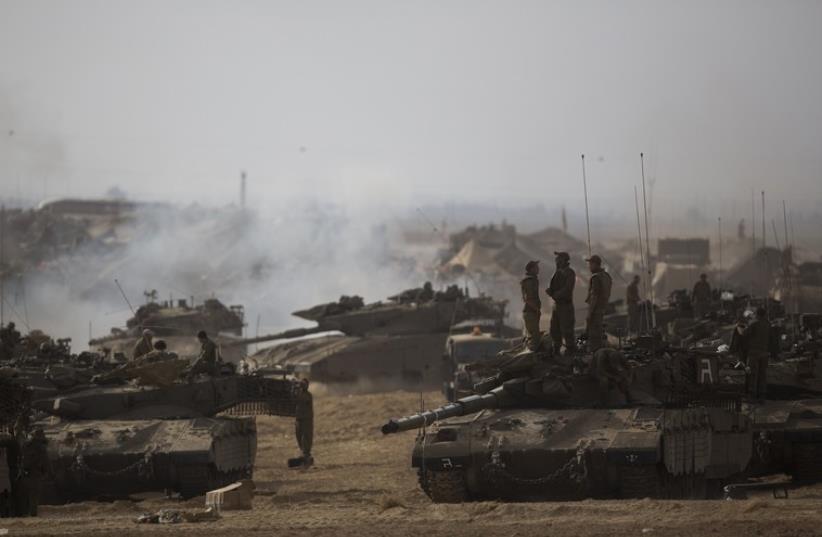 Israeli soldiers stand atop a tank at a staging area, near the border with the Gaza Strip
(photo credit: REUTERS)
Advertisement
A former senior security cabinet minister said the change of leadership in Egypt and the widespread re-arrest of Palestinians released by the Gilad Shalit deal and hundreds of others in the West Bank during the search for three Israeli teenagers kidnapped by Hamas were some of the reasons behind the 2014 war between Israel and Hamas in the Gaza Strip.Speaking to military reporters on Sunday, two days ahead of the expected critical report by State Comptroller Joseph Shapira into Operation Protective Edge, the former minister said that both sides did not want a confrontation – a conclusion that was also reached by Military Intelligence.According to the former minister, the unplanned escalation by Hamas was caused by a combination of factors: the arrest of 400 Palestinians during Operation Brother’s Keeper, including 50 who had been previously released as part of the Shalit deal; the already shaky economic situation in the Hamasrun enclave; and the election of Abdel Fatah al-Sisi in Egypt instead of the Hamas-friendly Muslim Brotherhood.
Operation Protective Edge
The economic situation in Gaza was said to be unsustainable before the war, with an average economic growth reaching -1% in the first quarter of 2014. According to a September 2014 report by the World Bank, “a quarter of the Palestinian population lives in poverty, with the rate in Gaza twice as high as that in the West Bank,” with approximately 41% of the population unemployed prior to the conflict.Since the ouster of former Egyptian president Muhammad Morsi in 2014 and the subsequent crackdown on Hamas smuggling tunnels – which meant losses of millions of dollars in tax income for the Hamas government – Hamas had struggled to pay its fighters, paying most of them only 45% of their monthly salaries.The weak economic situation in Gaza and the fact that Defense Minister Liberman blocked a $60 million Qatari transfer of salaries to Hamas’s non-combatant workers earlier in the year were other major reasons behind the 2014 conflict, the minister said.During the conflict, Moussa Abu Marzouk, then Hamas’s deputy political bureau chief, as well as former Hamas prime minister Ismail Haniyeh had cited the financial crisis as a central factor in the war and had demanded the transfer of the salaries as a condition for a cease-fire with Israel.The former minister, who is highly critical of the upcoming report, said that the Intelligence Directorate’s assessment at the time was that Hamas was not seeking an escalation in Gaza and had they been planning one they would have launched a coordinated surprise attack on several targets in Israel via their tunnels.Security cabinet ministers are said to have known about the threat posed by Hamas tunnels at least three months before the war, and while some ministers proposed air strikes against them, there were disagreements as to the most effective way to counter them.“It was a miscalculation on our part. One thing led to another and even though both sides didn’t want a war, we ended up going to war,” the former security cabinet minister said.The State Comptroller’s Operation Protective Edge report is to be released on Tuesday at 4 p.m. and is expected to be highly critical of Prime Minister Benjamin Netanyahu, former defense minister Moshe Yaalon and then chief of staff Benny Gantz.