Transportation Minister Israel Katz outlines his port plan, and how close it is to being realized, in an exclusive interview with the ‘Post’. 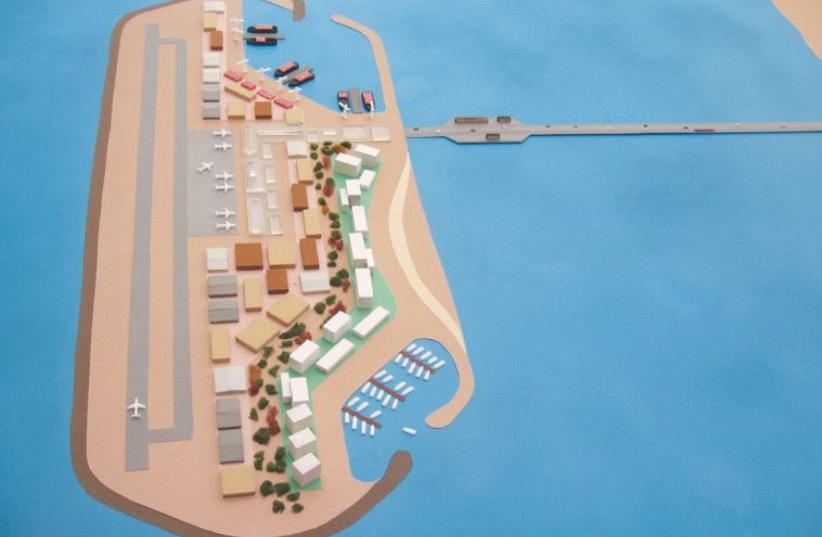 A MODEL of the proposed artificial island port that might be built off the Gaza shore.
(photo credit: TRANSPORATION MINISTRY)
Advertisement
For over six years, Transportation Minister Israel Katz has been telling everyone prepared to listen that the Gaza Strip needs its own seaport, and that the territory’s two million people need a trading outlet to the rest of the world.Driven by the idea that a port would be a strategic game-changer that would improve life for Gazans and significantly improve Israel’s diplomatic and security situation, Katz has, since 2010, been promoting the idea of building an island to host the port.Now, it seems, his proposal is advancing closer to reality than at any point in the past, as the cabinet prepares to resume discussions of the proposal, which also has the support of the Israeli defense establishment.In an exclusive interview with The Jerusalem Post in recent days, Katz recalled how, after the late prime minister Ariel Sharon withdrew every Israeli soldier and civilian from Gaza in 2005, he asked him what was next for the Strip’s residents. Successive prime ministers after Sharon have struggled to come up with an answer.The result, Katz said, is that the Hamas regime has been able to exercise absolute control over their lives, North Korea-style. Israel, meanwhile, has been accused of choking the Strip’s economy, despite its many efforts to truck in goods, and irrespective of the fact that Israel left the Strip more than a decade ago. To top it all off, Israel and Hamas have waged three wars since the disengagement, and Jerusalem has thus far been forced to fight one round after another against Gaza’s terrorist factions.A port for Gaza could solve all of those problems, though it would not make Hamas change its spots, Katz argued. It would relieve international diplomatic pressure over Gaza, provide a restraining factor for Hamas’s military wing, which would be forced to think twice before risking an improving Gazan economy and risk infuriating Gazans with another military adventure against Israel, and it would provide Gaza’s civilians with much needed humanitarian and economic relief.Defense chiefs have said, behind closed doors, that Israel can secure an offshore island port, and that the idea is not only feasible but attractive.“The cabinet will renew discussions on the Gaza port in the coming weeks. Then it will be raised for a vote. If the proposal is accepted, I’ll be chosen to lead a team, which will include representatives from the IDF, the intelligence community and the Environmental Protection Ministry, to prevent ecological mistakes,” Katz said.The minister has assured the Finance Ministry that “Israel will not pay” for the port, just as Israel is not paying for the private seaports being built at Ashdod and Haifa, near the state-owned ports.“We have to accompany the construction process, to ensure it proceeds correctly,” Katz said.Contacts with international elements are already under way, he revealed, including governments and private entrepreneurs.“The workforce would be Gazan,” Katz said. On a water desalination plant, electrical power plant and possibly, in the future, even a small airport.Katz envisages an island stretching out to 8 square kilometers, which would take some five years to construct, costing some $5 billion.States such as Turkey and Qatar have signaled an interest in investing in the project, while the European Union has been highly receptive as well.Businessmen from the Arab world’s private sector would be welcome to take part, and international corporations from Russia and Europe would also have an opportunity to come on board, Katz said.The transportation minister said that “environmental, trade and transport” parameters would form conditions for building the island.Regarding security, Katz said he has firm preconditions.The Israel Navy would monitor all ships approaching the island, and cargo containers would all undergo Israeli inspections, Katz said.After passing through that layer of security, the goods would be trucked from the island onto the Gazan mainland via a bridge, passing through an international police force checkpoint.A multinational force would grant the island an international standing, he argued.Gazans would not be able to decide which ships could arrive.“De jure, the port would be under Israeli security responsibility,” Katz said.The proposal has gained wide backing, from Right and Left in the political world, he said.“The current situation, in which Israel must consider whether to let in or deny every item entering Gaza, has reached absurd proportions, which damage Israel’s name internationally,” he added.Although Hamas has been demanding a Gazan port since the middle of the 2014 Gaza conflict, it may wish to be careful of what it wishes for, the minister implied, saying it might end up being a long-term curse to the Islamist regime, since the port might eventually loosen its total control over Gaza’s two million civilians.“As a right-wing person I say, we have no interest in imprisoning two million people,” Katz said.“The world perceives Israel as having responsibility for Gaza,” he stated, arguing that enabling the creation of the port will both help ordinary Gazans to make a living and improve Israel’s international diplomatic standing.“I’m in favor of them having a connection to the world,” he said. “It’ll be through this island, and the port.”The status quo gives Hamas “the key” to act as unrivaled dictators in the Strip, he warned. Since the security situation is closely linked to the economic one, an economic crisis in Gaza, whose onset seems to be only a matter of time, would inevitably lead to escalation, unless the cycle of wars and short-term truces is broken.“I am explicitly for improving the humanitarian situation of Palestinian civilians,” Katz said. “I’m in favor of humanitarian and economic help and the need to lift this responsibly from us.”