The new fence will run from the border east of Eilat to the Timna airport, and will be built entirely on Israeli land. 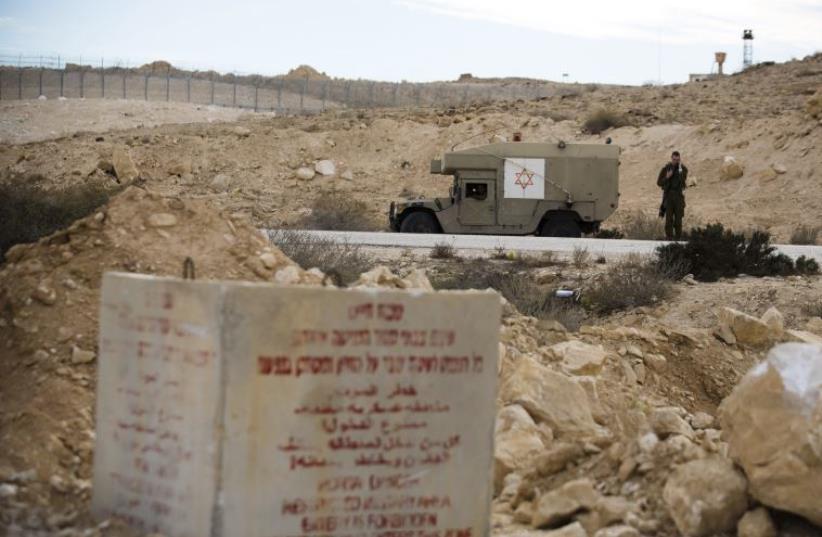 An IDF soldier near the border fence between Israel and Egypt.
(photo credit: REUTERS)
Advertisement
The government will build a fence along part of the border with Jordan, Prime Minister Benjamin Netanyahu said Monday before a closed-doors meeting with the Knesset Foreign Affairs and Defense Committee.The new barricade will span the 30 km. of border with Jordan northeast of Eilat, to the planned site of the Timna airport.“This is an important part of our national security,” said Netanyahu.The security cabinet authorized construction and funding of the fence on Sunday, something the government discussed as early as three years ago.The government was in touch with Jordanian officials and assured them the fence will be built entirely on Israeli land and will not harm Jordan’s sovereignty or national interests.There are currently fences between Israel and Sinai, and in the North between Israel and Syria.Netanyahu also discussed Iran, saying he is not impressed with the way talks between Tehran and world powers are progressing.“The agreement is going from bad to terrible and it is getting worse day by day,” Netanyahu observed.“Unfortunately, we see Iran’s demands increasing, along with more concessions by the powers,” he said. “[The agreement] paves the way for Iran to be a power with a nuclear arsenal.”The agreement will allow Iran to build an unlimited amount of centrifuges, which will allow it to break through to a nuclear bomb in a short time, he added.Within a decade, the prime minister said Iran will have dozens of nuclear bombs and will be able to develop a smaller amount of weapons before that, which will spark a nuclear-arms race in the region.Netanyahu also said the agreement does not deal with missiles Iran is developing that can reach the US and lamented that none of the parties involved in the talks took issue with Iran continuing to arm Hezbollah and Hamas.In addition, he said the agreement will grant Iran hundreds of billions of dollars by removing sanctions, which then will allow Tehran to fund increasing aggression in the Middle East.“For all these reasons, the agreement is bad,” he stated. “Israel reserves the right to defend itself.”As for relations with the US, Netanyahu said the ties are important, but rife with disagreements on the Iran deal, which is critical to Israel.The prime minister referred to disputes with the US on peace talks with the Palestinians, as well.“The idea that returning to ’67 borders will solve the problem was proven wrong, for example, in Gaza,” he stated.When asked how to quiet the situation in the West Bank, Netanyahu responded: “Strict security arrangements. No one else will do the work for us.”He also emphatically denied reports that Israel is cooperating with the Nusra Front, saying Israel’s policy is not to intervene in what is happening in Syria.