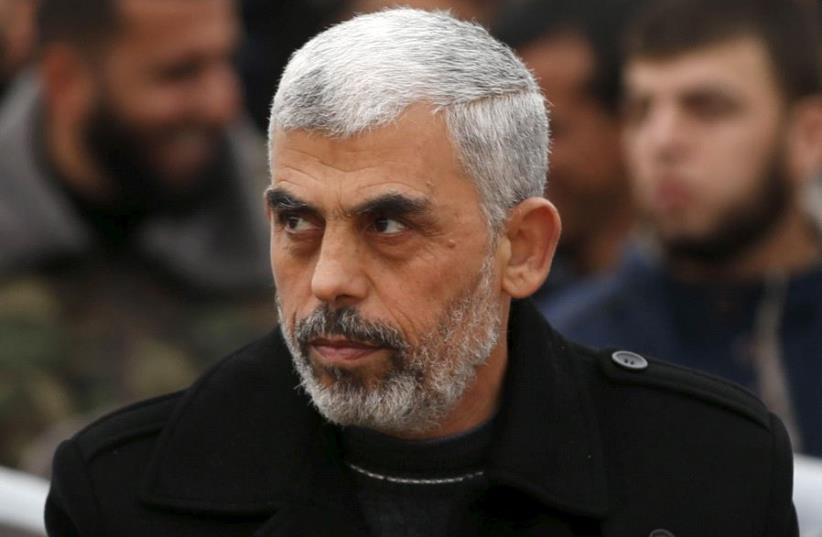 Hamas leader Yahya Sinwar attends a rally in Khan Younis in the southern Gaza Strip January 7, 2016
(photo credit: REUTERS)
Advertisement
Hamas’s chief in Gaza Yahya Sinwar unequivocally rejected recognizing Israel on Thursday, saying the issue for Hamas is “when to erase” the Jewish state.Sinwar was responding to comments made earlier in the day by US President Donald Trump’s peace envoy Jason Greenblatt, who said if Hamas wants to join a future Palestinian government, it must lay down its arms and recognize Israel.“The time in which Hamas discusses the issue of recognizing Israel is over,” Sinwar told a group of Palestinian youth in the Gaza Strip on Thursday, according to al-Shehab news agency. “The discussion now is about ‘when to wipe out Israel.’”Greenblatt, who is in Cairo to discuss reconciliation efforts with Egyptian officials, said earlier in the day that if Hamas wants to participate in any Palestinian government, it must back the Quartet Principles, which he said include committing to recognizing Israel, nonviolence, negotiations and previously signed accords, including disarming terrorists.Hamas and Fatah have renewed a push to advance national reconciliation, agreeing in Gaza last week to restore the Palestinian Authority’s governing authority. While the parties have not agreed to form a unity government, talks scheduled to take place between them in Cairo in late November are slated to discuss such a possibility.Sinwar also dismissed disarming Hamas’s military, the Izzadin Kassam Brigades, and a turn to nonviolence. The Kassam Brigades, comprised of some 25,000 members, are said to possess tens of thousands of rockets and to control a network of tunnels, some of which breach Israel’s border.“Nobody in the world can take away our weapons,” Sinwar said, according to the al-Shehab report and a separate account of his comments on Hamas spokesman Hazim Qassim’s Facebook page. “Not one minute in the day or night passes without our forces accumulating them. We are freedom fighters and revolutionaries for the sake of our people’s freedom.”Prime Minister Benjamin Netanyahu praised the Trump administration for Greenblatt’s statement.“I would like to commend the statement by the American administration in Washington,” Netanyahu said at an event in the Jordan Valley on Thursday. Netanyahu added that Israel wants to resolve the conflict, but would not conduct negotiations with violent groups such as Hamas.“We want peace. We want a genuine peace and because of this we will not conduct negotiations with a terrorist organization in diplomatic disguise,” Netanyahu said.PLO Executive Committee Member Ahmad Majdalani said the Palestinian leadership in Ramallah was surprised at the similarities between statements from Greenblatt and the Israeli security cabinet on Palestinian reconciliation efforts.The security cabinet issued a statement on Palestinian reconciliation on Tuesday that said Israel “will not conduct diplomatic negotiations with a Palestinian government that relies on Hamas” unless it recognizes Israel and stops terrorist activities, in accordance with Quartet principles. In the past, Israel did not conduct peace negotiations with the PA government, but rather, with the PLO.“The statement seemed like it was coming from the Israeli government rather than the American government,” Majdalani said in a phone interview. “We felt that it was not in support of the progress made in the reconciliation process.”However, Majdalani added, if a unity government is formed with Hamas, it would have to follow the policies of the Palestine Liberation Organization, which recognizes Israel and supports ending the conflict with it through peaceful means.“All parties will have to abide by the PLO’s program,” he said.Israel, the US and the European Union consider Hamas a terrorist group.