Hamas has dealt harshly with those it accused of collaboration in the past, executing many of them. 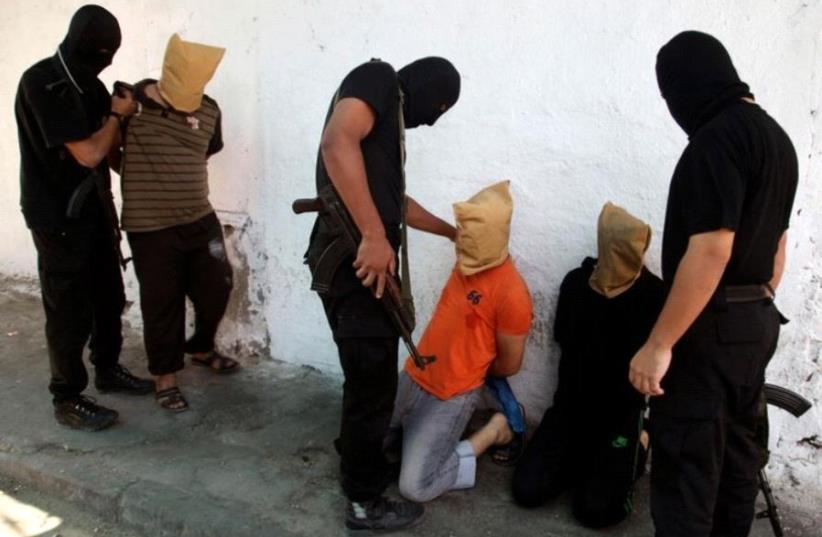 Hamas operatives prepare to execute alleged collaborators in the Gaza Strip
(photo credit: REUTERS)
Advertisement
Security services of Hamas in the Gaza Strip have arrested a number of Palestinians, accusing them of being collaborators with Israel, a news site closely affiliated with the group reported on Monday.“A group of collaborators were arrested and others are being pursued,” al-Majd said on its Facebook page.The Hamas-controlled Interior Ministry on Saturday night announced it was taking “increased measures” against collaborators with Israel in Gaza, as a part of a investigation into the assassination of Mazen Fukaha.Fukaha was a senior member of the Hamas military leadership who was mysteriously assassinated on March 24 near his home in the Tel al-Hawa neighborhood of Gaza City.Hamas has accused Israel and Palestinian collaborators of assassinating Fukaha and threatened to exact revenge. Israeli officials have not commented on the incident, except for Defense Minister Avigdor Liberman, who suggested that Israel did not take part in it.A Hamas security official said there would be lesser punishments for those who turn themselves in and repent for collaborating with Israel, Majd added in a separate posting on Monday.Hamas has dealt harshly with those it accused of collaboration in the past, executing many of them.Following Operation Protective Edge in 2014, the terrorist group executed 18 collaborators in a single day.