Hamas chief in the Strip Ismail Haniyeh tells the Palestinian people that talks underway to solve the rift between Hamas and Fatah are really meant to stop Israel from "swallowing up the West Bank." 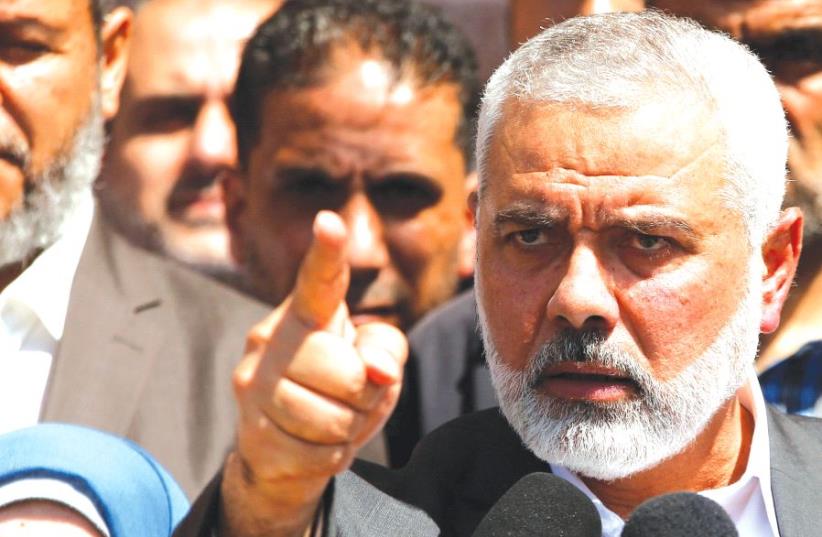 HAMAS LEADER Ismail Haniyeh gestures during a news conference in Gaza City earlier this month
(photo credit: REUTERS)
Advertisement
Hamas leader Ismail Haniyeh released an official statement aimed at the Palestinian people on Saturday evening in which he explained that the attempts to forge a reconciliation between his party, which rules in the Gaza Strip, and Fatah, the party in control at the West Bank, comes as a reaction to Israel's unfavorable actions in the region. "The reconciliation is a will and a decision, to prevent Israel from swallowing up the West Bank and continuing its siege of the Gaza Strip," Haniyeh stated as Palestinian Prime Minister Rami Hamdahllah arrived at the Strip from Ramallah on a key visit. Over the last day, security officials from the Palestinian Authority, including the presidential guard (which is expected to take on the responsibility of managing border checkpoints between Israel and Egypt according to the potential reconciliation accord), arrived in Gaza to continue coordinating several topics between the two parties as they attempt to solve the deep rift between them. Haniyeh described Hamas's decision to end the long and bitter conflict between the two parties as a "strategic" one, and acknowledged that he foresees that there will be setbacks along the way."We understand that the inner-Palestinian reconciliation process could be long, because of the setbacks along the way, and the fact that there are many issues that require brave decisions, but we are certain that we have started tearing down the wall of separation. We are in a situation of national, regional and international changes in addition to the strong Egyptian backing which supports the end of the rift." The Hamas leader also stressed that his organization will continue the dialogue with Cairo in order to implement all the agreements, build a national joint government and prepare for elections for the parliament and the presidency. "We are certain of the whole organization's support for this move— seeing as Hamas made this decision out of a national will and with the support of its political and military power, as well as its steadfast stature facing the siege and the wars, while answering the will of our people for the sake of unity," Haniyeh affirmed. The end of the Palestinian rift would "renew everyone's hope, and we hope that our brothers at the PLO will make an effort in this direction, to make the first move together successfully, as the government goes back to acting in the Gaza Strip and taking the responsibility upon itself," his message to the Palestinian people concluded.