Killing captured on camera and broadcast on Facebook Live. 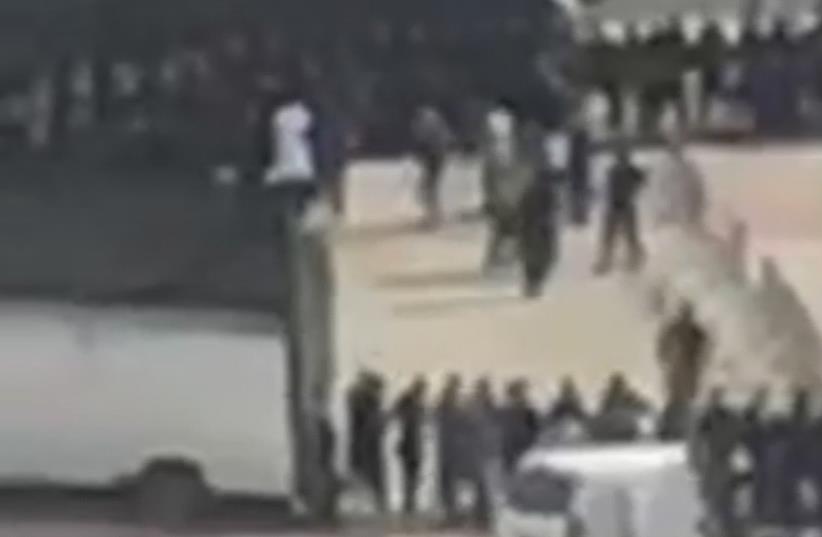 Screen capture of a Facebook Live broadcast apparently showing the execution, secretly shot from a balcony across the street
(photo credit: screenshot)
Advertisement
The Hamas-controlled Interior Ministry in Gaza on Thursday said it executed the suspected killer of Mazen Fuqaha and his two alleged accomplices.According to the ministry, the suspected killer and one of the alleged accomplices were hanged and the second alleged accomplice was shot to death.Grainy images of what a Gaza-based news organization said were the executions were broadcast live on Facebook.The images appeared to be shot from a distant building.Later on Thursday, Hamas warned Gazans against publishing images of the executions.
Hamas sentences three Palestinians to death over commander"s killing (credit: REUTERS)
The suspected killer and alleged accomplices had been sentenced to death by a Hamas military court on Sunday, which said they took part in the killing of Fuqaha, a senior leader of Hamas’s armed wing who was mysteriously assassinated on March 24 in front of his house in the Tel al-Hawa neighborhood of Gaza City.Human rights groups criticized the haste in which the three men were punished.“Rushing to put men to death based on an unreviewable decision of a special military court days after announcing their arrests... smacks of militia rule not the rule of law,” said Sarah Leah Whitson, executive director of the Middle East division of Human Rights Watch.Hamas formed a special court to try the suspected killer and two alleged accomplices, which quickly reached a verdict.Hamas military prosecutor Fadl al-Jadeili has dismissed criticism by human rights groups of the special court, saying they do not have all the details of Fuqaha’s assassination.Since taking over Gaza in an armed coup in 2007, Hamas has executed 28 people sentenced to death by its courts, according to the Palestinian Center for Human Rights.