Unlike average summer camps, the new recruits, aged 15-60, are being trained in "military techniques and firing live ammunition." 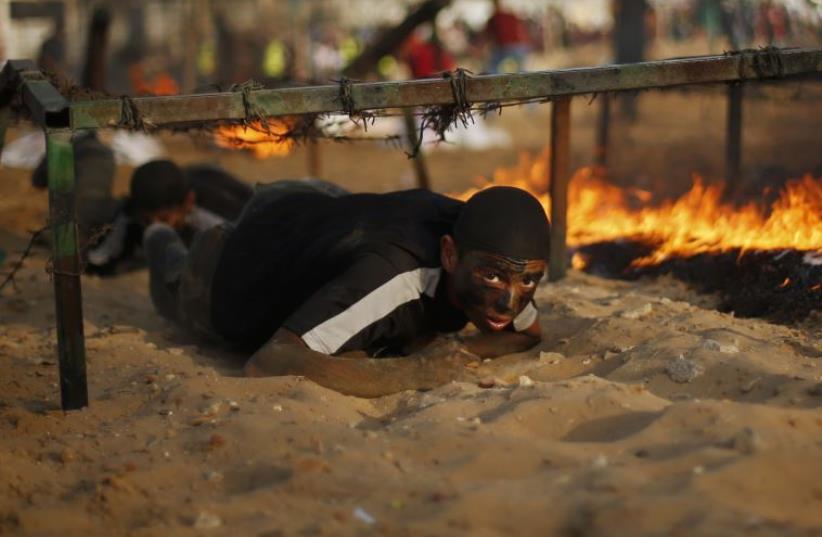 A young Palestinian crawls under an obstacle during a military-style graduation ceremony at a summer camp in Gaza
(photo credit: REUTERS/MOHAMMED SALEM)
Advertisement
The military wing of Hamas, the Izzidin Kassam Brigade, began its training program on Saturday, aimed at providing basic combat training to 25,000 Palestinians in Gaza, AFP reported. The new recruits, aged 15-60, entered a two-week training camp to be trained in "military techniques and firing live ammunition," as well as "first aid and rescue," the Kassam Brigades said in a statement. "The goal of these military training camps is to train the vanguard for liberation - spiritually, intellectually and physically - to be ready and able to play its role in liberation." Although Hamas is allegedly engaged in indirect talks with Israel in order to reach a long-term truce, Hamas continues to quietly train new militants. As with other brigade activities, the training camp will be conducted out of sight of  the public and media. Human rights activists have long condemned Hamas for its forced militarization of Gazan communities, which they view as exploiting children in the region and a clear human rights violation. Hamas' annual training camp opens its doors again a year after Operation Protective Edge in Gaza. Sixty-four IDF soldiers and officers were killed in the operation, as well as three civilians.1,867 Palestinians were reportedly killed, according to Gaza officials, 253 from Hamas, 147 from the Islamic Jihad, and 603 were militants whose affiliations were not immediately established.