US House Appropriations will strongly look into PA 'martyr' funding

"There simply cannot be peace, anywhere, if children are raised with hatred." 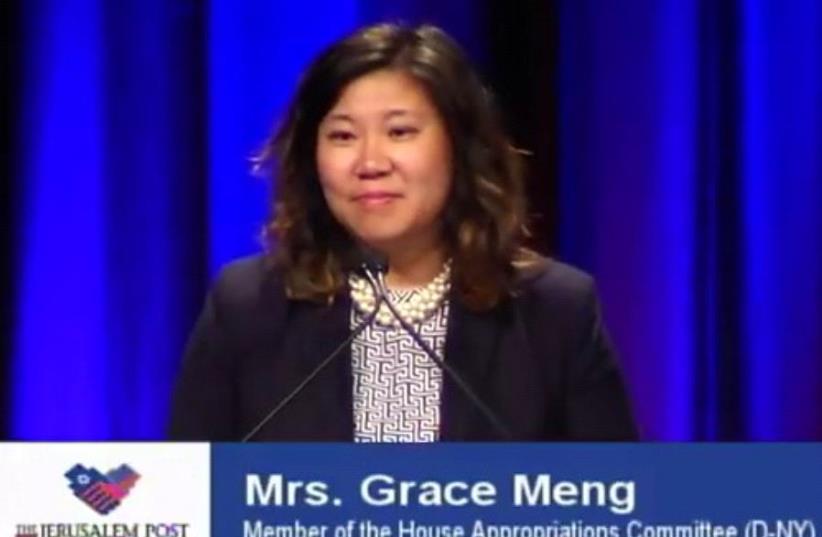 Rep. Grace Meng (D-NY)
(photo credit: screenshot)
Advertisement
NEW YORK – A Palestinian Authority program that provides stipends to the families of convicted terrorists in Israel concerns Democrats as much as Republicans on Capitol Hill, one lawmaker said on Sunday.Rep. Grace Meng, a Democrat from New York, told The Jerusalem Post Annual Conference in New York that, as a new member of the House Appropriations Committee, she will push for an end to the program, which the PA describes as a compensation scheme for “martyrs” of the Palestinian cause.Congressional appropriations committees are responsible for regulating federal expenditures, such as US foreign aid to organizations like the PA.Meng signed a bipartisan letter sent to US President Donald Trump last week encouraging him to raise the issue in his meeting with PA President Mahmoud Abbas.“I’m appreciative that [Trump] took that into consideration,” Meng said. “However, Abbas’ denial of the reality of incitement is something that we need to continue to strongly look into. And I will be doing so.”“There simply cannot be peace anywhere if children are raised with hatred,” she said.Meng was the first New York Democrat to announce opposition to the Iran nuclear deal during a floor fight over its survival in 2015. She continues to oppose the agreement, she says.“Making sure that we keep Iran accountable is a huge piece of the US-Israel relationship,” Meng said. “I am still working with like-minded congressional colleagues on a bipartisan level to ensure that Iran is not able to subvert the goals of the deal.”To that end, Meng is part of several initiatives that would increase monitoring of Iran’s ports and checkpoints, press the Treasury Department on Iran’s alleged dollarization, target Iran’s ballistic missile activity and strengthen non-nuclear sanctions enforcement.Since joining Congress, Meng has consistently voted to increase military aid for Israel, expressing particular favor for increased funding to its short- , mid- and long-range missile defense programs. On Sunday, she praised the Obama administration’s brokerage with the Israeli government of a memorandum of understanding that will provide the Jewish state with $38 billion in defense aid over the course of the next decade.