How did the Netanya stabber cross into Israel from the West Bank?

Soldiers stationed at checkpoints are expected to maintain a high level of alertness – despite working eight-hour shifts, sometimes in extreme heat and on little sleep. 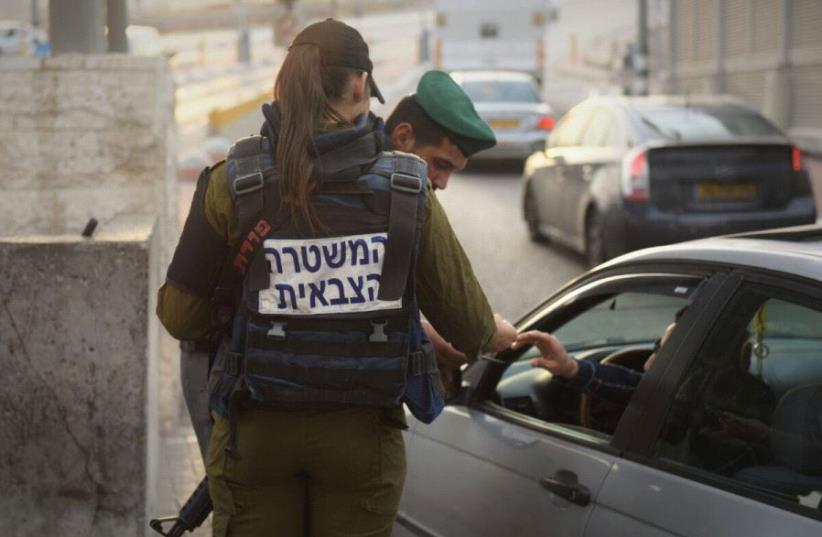 Soldiers of the IDF's Taoz Battalion at checkpoints between Israel and the West Bank
(photo credit: IDF SPOKESPERSON'S UNIT)
Advertisement
Questions have been raised as to how a Palestinian resident of the West Bank city of Tulkarem crossed into Israel and carried out a stabbing attack against a policeman in Netanya.Checkpoints are the last barrier between Israel and the territories. The IDF’s co-ed Taoz Crossings Battalion guards 32 checkpoints across the West Bank, from Afula and Jenin in the North to the vicinity of Jerusalem, including the Te’enim crossing near Tulkarem.
The scene of the stabbing attack in Netanya. (Magen David Adom)
While Tuesday’s attack happened inside Israel, there have been dozens of incidents at checkpoints during the latest wave of violence by Palestinian attackers, many of whom were shot dead by security forces.While Israeli authorities claim that Palestinians shot by security forces were either a danger to personnel or the public, a 2016 report by Human Rights Watch claimed that more than 150 were fatally shot when lethal force had been unnecessary.A senior officer from the battalion told The Jerusalem Post that while there is “absolutely no need to shoot someone dead if you can neutralize the attacker with non-lethal force,” if someone is running toward a soldier with a knife, troops have the authority open fire.“The challenge is to be smart and to work in a diligent manner. We can’t always tell who is a potential attacker and who isn’t; that’s a major challenge,” the officer added, explaining that troops have only seconds to decide whether to act, such as pulling aside a suspicious car or truck for further inspection. To thwart attacks, soldiers at checkpoints not only rely on their gut, but use advanced technology to inspect vehicles that might be hiding illegal goods such as meat or eggs, drugs such as hashish or marijuana, or Palestinians looking to cross into Israel illegally.“It’s like a game of cat and mouse. We are always finding new ways they are hiding illegal goods or people,” he said.“We always remind our soldiers that if a terrorist gets past us, an attack will happen in the center of the country. We are the last security check.”While the officer told the Post that his soldiers were trained professionals, the battalion has been accused of purposely delaying Palestinians and destroying cell phones.The Military Police has arrested several soldiers, even commanders, for taking bribes in exchange for allowing passage through checkpoints without inspection.Soldiers stationed at checkpoints are expected to maintain a high level of alertness – despite working eight-hour shifts, sometimes in extreme heat and on little sleep – and have only seconds to check Palestinians who are crossing into Israel.