Barzilai says hunger striker now being fed by hospital and his health improving, as IDF steps up readiness amid fears of escalation. 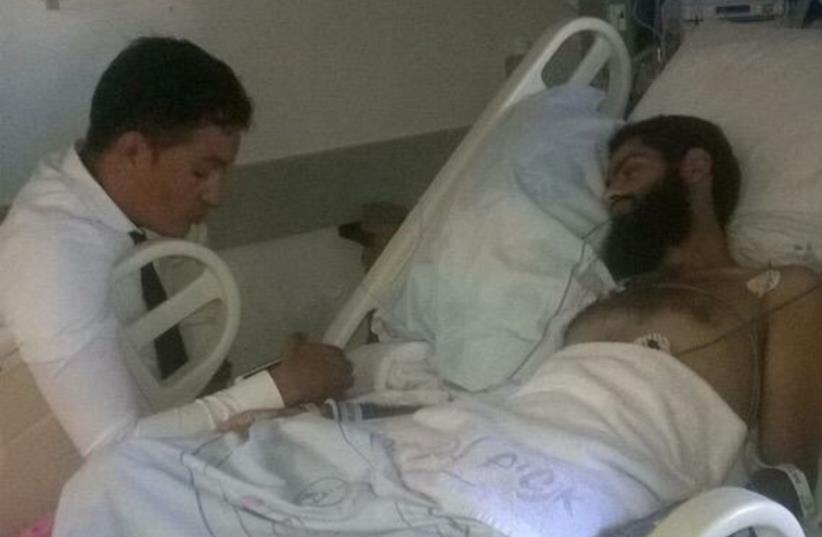 Muhammad Allan, with his lawyer, recovering in hospital
(photo credit: MARUAN ABU FARIYA)
Advertisement
Palestinian security prisoner Muhammad Allan ended his hunger strike on Thursday after 66 days and began receiving fluids and other nutrients intravenously from medical personnel at Ashkelon’s Barzilai Medical Center.Allan, an Islamic Jihad member from the West Bank, did not put out an official statement about ending his strike, but according to Ayelet Keidar, a spokeswoman for Barzilai, Allan “will be willing to receive anything that the hospital recommends to him. Feeding by mouth after an extended fast is done carefully, slowly, and in stages. At the moment he is being given fluids and certain other nutrients intravenously.”In response to reports that security guards were posted outside Allan’s hospital room to prevent attacks by Israeli extremists, Keidar said that “our security guard is there in order to keep the peace, just like in other departments of the hospital. Keep in mind this is an intensive care ward.”Allan was placed on a respirator and put under sedation Wednesday night after a decline in his condition, but at a press conference Thursday, Barzilai director Dr. Hezi Levy said Allan’s condition had improved significantly since Wednesday night, and that he was conscious and breathing on his own, and able to communicate with those around him.“I am pleased that he is on the right path from a medical perspective,” he added.Levy’s tone was markedly more optimistic than the day before, when doctors carried out an MRI examination of Allan and ruled that he is suffering from brain damage, though the hospital director said it was not clear whether the damage was permanent.Allan had been informed about the High Court of Justice’s decision to release him from administrative detention and that doctors have recommended to him that he start to eat, beginning with just a small amount of sugars and slowly progressing to solid foods once his body is able to absorb them, Levy said.“I hope that he will change his approach and begin accepting the treatment we are giving him and begin eating, otherwise we can’t help him,” Levy said.Also Thursday, the IDF raised its alertness level in the South and deployed Iron Dome batteries outside Ashdod and Beersheba out of fear of an escalation if Allan’s health were to take a turn for the worse.On Wednesday, the High Court of Justice freed Allan from administrative detention due to his deteriorating medical condition, on the 65th day of his hunger strike.Allan began his hunger strike after he was arrested by security forces late last year and placed on administrative detention. He has yet to be charged with a crime.Administrative detention is a controversial practice by which suspects believed to be involved in security crimes may be kept in custody for months at a time, and potentially indefinitely if the order is renewed by a judge.Authorities do not need to charge suspects under administrative detention with a crime or reveal the evidence or allegations against them.Most Palestinian hunger strikers in recent years have launched their campaigns to protest the practice. One of the most famous of these was Khader Adnan, also a member of Islamic Jihad, who in 2011 went on a hunger strike for 66 days and grabbed headlines around the world.The High Court also ruled that, due to his diminished health, Allan’s family members could visit him without restriction, as if he were not a detainee.The court’s decision on Wednesday was met with anger from a number of politicians, including Public Security Minister Gilad Erdan (Likud), the sponsor of a recently passed bill allowing the forced-feeding of hunger strikers.“The decision to release the terrorist Allan was first and foremost due to the stance of the Israel Medical Association, and their head Dr.[Leonid] Eidelman, who made the decision that they would not treat hunger strikers until they have lost consciousness and are in danger of suffering irreversible damage.”Erdan criticized the doctors for refusing to treat Allan against his will, a procedure that doctors and other medical officials have said would represent a violation of medical ethics and would only be allowed if the patient loses consciousness and is in danger of dying.