The arrest comes against the background of heightened tensions between Hamas and Israel. 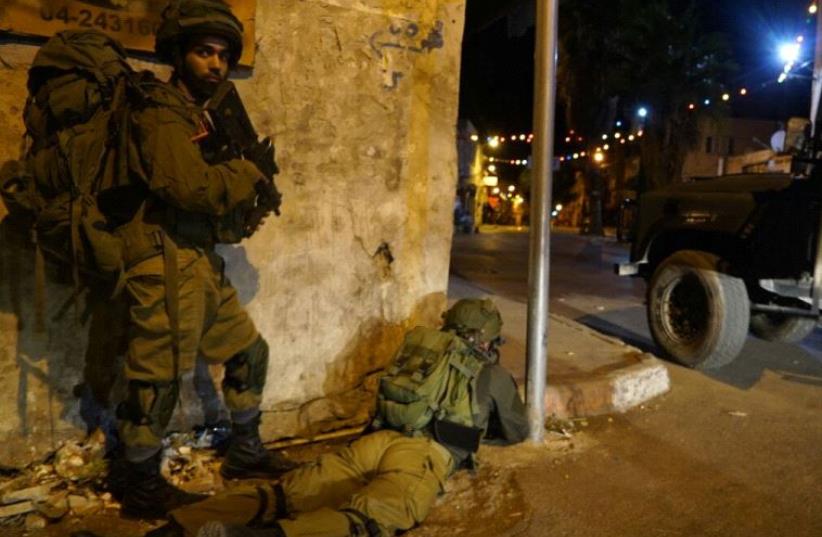 IDF confiscates weapons in West Bank
(photo credit: IDF)
Advertisement
Israeli security forces arrested a senior Hamas official in the West Bank city of Tulkarm on Monday as tensions continued to rise between Israel and the Islamist movement.Rafat Nasif, a member of Hamas’s political leadership, was arrested along with 13 others early Monday morning as part of a series of arrests across the West Bank, the IDF Spokesman’s Office said.The Shin Bet (Israel Security Agency) said Nasif was arrested for “Hamas-related activities in the area of his residence,” without elaborating.Israel released Nasif from jail a month ago after holding him under administrative detention for nine months.The arrest comes against the background of heightened tensions between Hamas and Israel following the mysterious assassination of Mazen Fukaha, a senior member of the terrorist organization, in the Gaza Strip.Hamas has accused Israel of carrying out the killing and threatened to exact revenge.Israeli officials have not commented on the assassination, but members of the defense establishment are concerned about a possible attack against Israelis in the West Bank or the Gaza border region.Hamas is carrying out an investigation into Fukaha’s murder and on Sunday closed the only border crossing between Israel and Gaza, except for “humanitarian cases” returning to the strip.The crossing was sealed as a part of a number of security measures taken by Hamas following the assassination, the Hamas-controlled Interior Ministry said.However, the terrorist group partially reopened the Erez crossing on Monday morning to a limited number of groups, excluding men between the ages of 15 and 45 in those groups.In extraordinary move, the Hamas-appointed Attorney-General Ismail Jaber also censored the publication of all details relating to the investigation of Fukaha’s killing.Israel and Hamas have maintained a cease-fire since Operation Protective Edge in late 2014, with the exception of a handful of rocket attacks on Israel’s southern territories and subsequent Israeli targeting of Hamas positions.Anna Ahronheim contributed to this article.