IDF Chief of Staff: Return of Palestinian terrorist's body was a mistake

Father of murdered border police officer: Makes no difference to me, it won't bring back my son 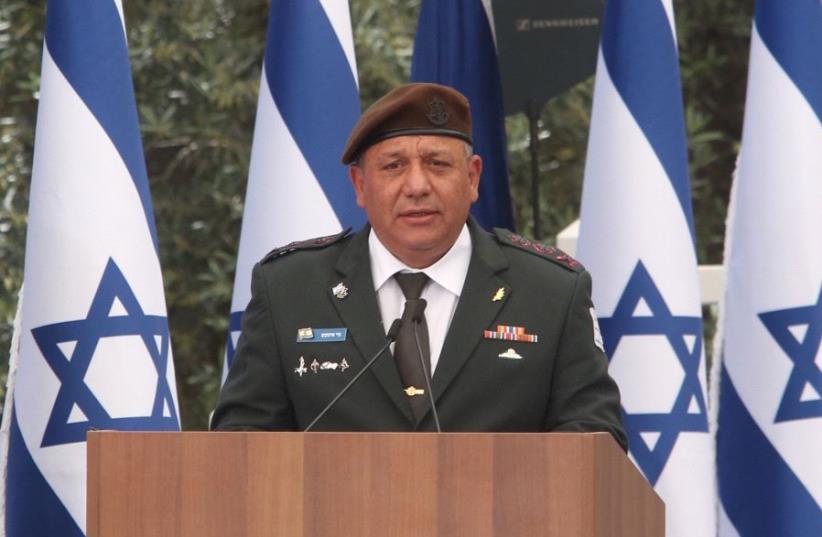 IDF Chief of Staff Gadi Eisenkot
(photo credit: MARC ISRAEL SELLEM)
Advertisement
Returning the body of Palestinian terrorist Nimr al-Jamal, who murdered three Israelis, was a mistake, IDF Chief of Staff Lt.-Gen. Gadi Eisenkot told security cabinet ministers on Wednesday.Eisenkot said that the return of Jamal’s body was “an error” which he took responsibility for and that  “lessons will be learned from the investigation conducted on the subject.”In late September, Jamal carried out a shooting attack at the entrance to the West Bank settlement of Har Adar. He killed 20-year-old Border Police officer St.-Sgt. Solomon Gavriya of Be’er Yaakov and two civilian security guards – Youssef Othman, 24, of Abu Gosh, and Or Arish, 25, of Har Adar – before he was shot and killed by security forces.Israel handed over al-Jamal’s remains on Friday evening, in coordination with the Palestinian Red Crescent and the Palestinian Authority Civil Affairs Ministry and his funeral in Beit Surik was attended by thousands of Palestinians, some waving flags belonging to Fatah and Hamas.Deputy Defense Minister Eli Ben-Dahan applauded Eisenkot’s statement, telling The Jerusalem Post that “I unequivocally believe that the bodies of terrorists should not be returned to their families. We will not rest until we stop the absurdity of returning the bodies of terrorists, as even after his death, he is still a terrorist and should be treated accordingly.”The father of Gavriya told the Post that Eisenkot’s statement as well as the return of al-Jamal’s body, had no effect on him.
Solomon Gavriya’s father with the Deputy Defense Minister Eli Ben-Dahan (Courtesy Ministry of Defense)
“As a father it won’t help me at all. I wont get my son back,” Mahret Gavriya said on Thursday. “Now it’s not life. We lost our happiness, he always made us smile. We are no longer happy now that he’s gone.”Gavriya spoke to the Post following a ceremony where a Torah scroll was dedicated in the name of his son at their local synagogue in the central city of Be’er Yaakov.The event took place as part of a larger project that began a year ago by Ben-Dahan in cooperation with the Border Police and the Oz and Hadar association, which brings Torah scrolls from abroad to Israel in memory of IDF soldiers who have been killed while in service.The ceremony was attended by some 500 people including Gavriya’s family and community, Ben-Dahan, Border Police commander Yaakov Shabtai, Military Ombudsman Maj.-Gen. (res.) Yitzhak Brick, head of the Beer Yaakov local council Nissim Gozlan, Har Adar council head Chen Philipovitch and fellow Border Police officers.While the event was a joyous one, it was painful at the same time Mahret Gavriya said.“I was happy, but it hurt me. How did I get here, that I lost my son? My son was taken to soon. This was like the wedding that he will never have.”Idit Druyan, the spokeswoman for Ben-Dahan, organized the event after hearing the stories of Soloman Gavriya in the media.“He was a hero in the eyes of his community and for his friends in the Border Police,” she told the Post. “I turned to the deputy asking him to hold a big event in his memory, during which his heroism and character will be at the center.”“Solomon Gavriya was a hero,” Ben-Dahan told The Post, remarking on how Gavriya returned to the Border Police despite being injured in another terror attack several months earlier.“He was always willing to help anyone, he was courageous and determined on the one hand and modest on the other.  I am happy to give this Torah scroll to his synagogue where he used to pray alongside his friends and fellow Border Guard soldiers,” Ben-Dahan continued.his is the second Torah scroll to have been dedicated to an IDF soldier murdered in terror attacks in recent months through Ben-Dahan’s project. The scroll was donated by Oshik and Anna Forshian in the name of the late Stefan Kowalski who helped Anna immigrate to Israel from Poland.Last month, a Torah scroll was donated to a high school in Ramat Gan in the name of St.-Sgt. Ron Yitzhak Kokia – a sergeant in the IDF’s Nahal Brigade who was stabbed to death while he was waiting at a bus stop outside a shopping mall in the southern city of Arad on November 30.