The incident marks the second terrorist attack of the day. 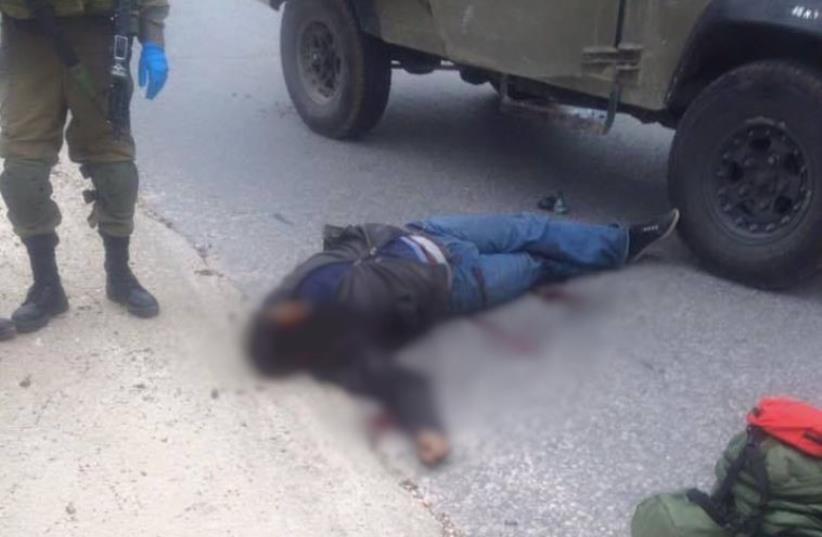 Suspected assailant shot and killed near Nablus
(photo credit: ARAB MEDIA)
Advertisement
An IDF officer was lightly wounded and two Palestinian assailants were killed on Thursday in separate West Bank attacks.Around 2 p.m. Haytham Mahmoud Yassin, 36, threw an object at a military jeep near Mt.Eybal near the city of Nablus in the Samaria region of the West Bank, the IDF said.Soldiers stopped the jeep and got out of the vehicle to investigate when Yassin approached them and stabbed an officer in the hand, lightly wounding him. One of the soldiers immediately shot and killed Yassin.In the morning, Muayad Awni Jabarin, 20 from the village of Sair, tried to stab a solider at the Beit Einoun junction, in the South Hebron Hills. A soldier shot and killed Jabarin, who was the sixth member of that village killed for attacking soldiers in the last 10 days.No soldiers or Israelis were injured in what was the second attempted stabbing at the Beit Einoun junction this week.Defense Minister Moshe Ya’alon said Thursday that Israel’s preemptive raids and arrests have prevented violence from escalating into an armed Palestinian revolt, and he thought the grassroots violence would wind down.“We are managing to foil plans by the organizations, the terrorist groups like Hamas and Islamic Jihad, to carry out attacks. If it were up to them, there would be suicide bombings and gun attacks here every day,” Ya’alon told Israel Radio.“The fact that we are succeeding lends salience to the attempted stabbing or car-ramming attacks. We will also prevail over this phenomenon, I say, but this is a process that takes time. Statistically, we see that this is waning.”Reuters contributed to this report.