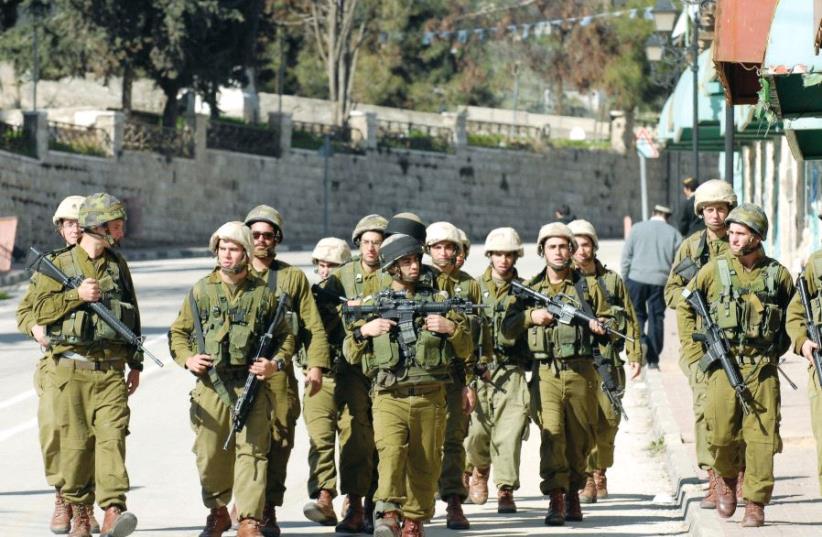 IDF soldiers patrol after clashes with Hebron Jews seeking to thwart evacuation from the city’s wholesale market in 2006
(photo credit: AVI OHAYON - GPO)
Advertisement
Punitive steps were taken on Sunday against two IDF commanders involved in an accidental death last month near the West Bank village of Nebi Salah.According to an investigation, an IDF force operating in the area on October 31 spotted a vehicle that seemed suspicious and signaled for the driver, Mohammad Musa, to stop. When Musa failed to stop, they shot at the car, killing him and wounding his sister, Litfa.As a result, Col. Dado Bar-Kalifa, commander of the Givati Brigade, reprimanded a deputy company commander and relieved a squad commander from his duties.The results of the inquiry were presented in recent days to the head of the IDF Central Command, Maj.-Gen. Roni Numa. They determined that the commanders were “acting unprofessionally” and did not provide information properly regarding the suspicious vehicle.The IDF added in a statement issued on Tuesday that “the operational lessons determined by the inquiry regarding the position of the force and the way it operated and responded are being taken into consideration and will be learned by all of the forces.”The IDF Spokesperson’s Unit said the inquiry was not yet over and that its findings would be turned over to the IDF prosecutor.Joint List leader MK Ayman Odeh criticized the actions taken, saying the punishment seemed minor.“A brother and a sister are driving a car together, listening to music and having fun, until shots penetrate the car and they are killed,” he said. “But the shooters are not indicted for murder, and even not for killing – they are reprimanded and told they behaved unprofessionally.”