“The takeover process was short and without casualties,” the IDF stated. 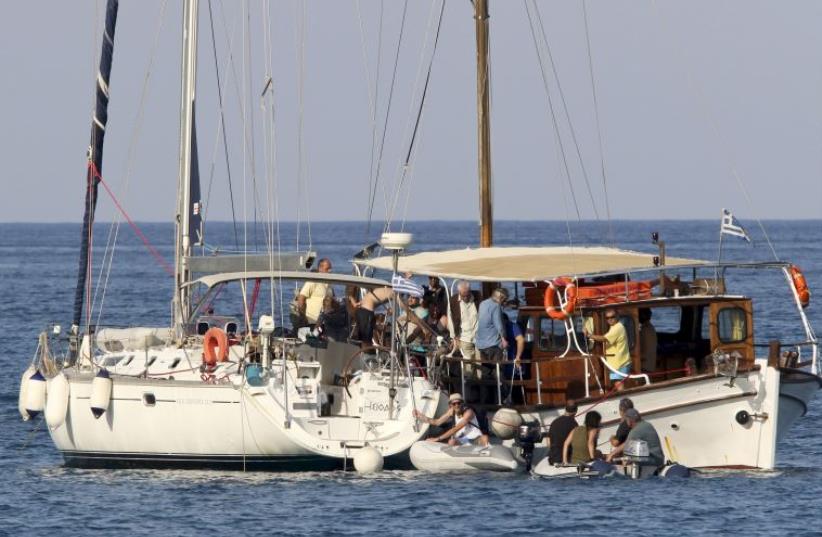 Activists aboard a flotilla to Gaza.
(photo credit: REUTERS)
Advertisement
A flotilla carrying 13 women, which was bound for Gaza was intercepted by the Israeli Navy late Wednesday afternoon. The Zaytouna-Olivia, which set sail from Barcelona in September was seized by the Israeli Navy around 35 nautical miles off the coast of the Gaza Strip and towed to the Ashdod port without incident, the IDF said in a statement. The all-female “Women’s Boat to Gaza,” is part of larger movement of pro-Palestinian boats that periodically set sail to Gaza in an attempt to break the maritime blockade. There were no reported casualties or injuries. Among the 13 women on the boat were 1976 Nobel peace laureate from Northern Ireland Mairead Maguire and retired US army colonel Ann Wright. In a statement the IDF said they took over the boat after it became clear that the flotilla did not intend to willingly sail to the port of Ashdod. “The takeover process was short and without casualties,” the IDF stated. The Woman’s Boat to Gaza said that they lost contact with the flotilla at 3:58 p.m. and called on supporters to contact Israeli and international government officials to demand a release of the activists and “an end to the illegal blockade.” The IDF escorted the all-female flotilla ship to the Ashdod Port.Zohar Regev an Israeli activist living in Barcelona and coordinator of the Women’s flotilla told The Jerusalem Post on Wednesday before the boat was intercepted that. “The Israeli government is making the same mistake again stopping international peace activists in water that is not Israeli water and stopping people that are not aiming to harm Israelis in any way and just trying to bring a message of hope and solidarity to Gaza,” she stated. The Israeli government has repeatedly stated that lifting the blockade will allow Hamas militants to smuggle weapons and convert imported materials into weapons and rockets. Hamas and other factions have fired approximately 11,000 rockets at Israel since 2007, according to the IDF.Yesh Atid MK Yair Lapid criticized the women’s flotilla on his Twitter account for protesting the maritime blockade while a rocket from Gaza landed in the Israeli city of Sderot Wednesday morning. “What is the height of hypocrisy? A flotilla 'to free' Gaza, while from Gaza they are firing rockets at innocent civilians,” Lapid remarked.Likud MK Anat Berko accused the flotilla of being linked to Hamas but presenting a false "facade of civil society," in a Facebook post.  Social media reports showed photos of Palestinians waiting to welcome the flotilla ship with flags and signs that read, “you are welcome in Gaza.” In June 2015 the Israel Navy intercepted the Swedish fishing boat Marianne av Göteborg into Ashdod Port some 85 nautical miles off the Gaza Strip Coast. Among the Marianna’s passengers were MK Basel Ghattas (Joint Arab List) and former Tunisian president Moncef Marzouki. In 2010 Israel commandos killed 10 Turkish activists after they raided the Gaza-bound Mavi Marmara flotilla and conflict ensued. The incident lead to years of tense relations between Israel and Turkey, which was reconciled at the diplomatic level with a reconciliation agreement between the two countries in June of this year.
How the IDF reroutes a Gaza-bound flotilla
Lahav Harkov and Yaakov Lappin contributed to this report