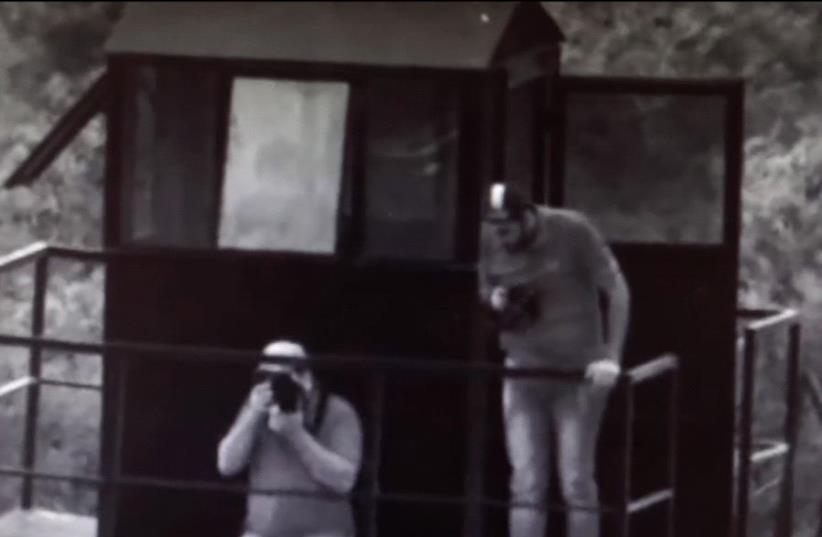 Hezbollah at outpost in Southern Lebanon Border
(photo credit: IDF)
Advertisement
The UN Security Council will hold consultations on Thursday about alleged violations by both Hezbollah and Israel of its resolution that ended the Second Lebanon War, the IDF’s Spokesperson’s Unit said.Last month the IDF accused the Shi’ite terrorist organization of violating Resolution 1701, which set the terms to end the 34-day war fought between Israel and Hezbollah in the summer of 2006.Hezbollah has been establishing observation posts under the guise of a NGO “Green Without Borders” near the Blue Line border between Lebanon and Israel since April, presumably to gather intelligence, the IDF said.
Hezbollah says future Israel war could draw more fighters than in 2006 (credit: REUTERS)
The army on Tuesday released additional footage of Hezbollah members gathering intelligence on Israel, saying that the Iran-backed Lebanese group continues to use the NGO as a front for information gathering in order to harm Israel.“Hezbollah is gaining ground in southern Lebanon, and has even established a military infrastructure of rockets aimed at northern Israel, knowing that it is endangering the population [civilians in south Lebanon],” the IDF said, adding that the terrorist group “is able to maintain the secrecy of its intentions while avoiding UNIFIL criticism [because of] warnings from the Lebanese Army.OC Northern Command Maj.- Gen Yoel Strick, at a ceremony in northern Israel on Tuesday, said the IDF’s readiness is constantly increasing and that it continues to monitor the situation along the border.The army is “constantly improving its defensive responses and its offensive capabilities, if required,” Strick said.According to Strick, the Lebanese Army “turns a blind eye” to Hezbollah’s activity and even allows it to use its infrastructure against Israel.In footage the IDF released in June, Hezbollah operatives are seen erecting observation posts. Maj.-Gen. Herzel Halevi, the commander of Military Intelligence, said the disguised operations were part of yet another attempt by the terrorist group to “further entrench its terrorist infrastructure [in the area].”Hezbollah is “once again blatantly breaching UN Resolution 1701,” which called for the disarmament of armed groups in Lebanon, Halevi added.Danny Danon, the ambassador to the United Nations in New York, condemned Hezbollah’s disguised activity in a letter to the president of the UN Security Council, calling on it to “demand that the government of Lebanon dismantle these observation posts immediately, and prevent any future activity of Hezbollah and its affiliates in southern Lebanon, particularly near the Blue Line.”UN spokeswoman Eri Kaneko rejected Israel’s accusations, saying that the UN Interim Force in Lebanon (UNIFIL) is in contact with the Lebanese Armed Forces to ensure that there are no violations of the resolution and “to avoid any misunderstandings or tensions that could endanger the cessation of hostilities.”While “Green Without Borders” members have planted trees in the area, UNIFIL “has not observed any unauthorized armed persons at the locations or found any basis to report a violation of Resolution 1701,” she said, adding that “UNIFIL remains vigilant and continues to monitor the Blue Line.”According to IDF Chief of Staff Lt.- Gen. Gadi Eisenkot, while UNIFIL is helping maintain calm in southern Lebanon, its leadership does not do enough when Hezbollah violates the resolution.Eisenkot has accused Hezbollah of continuing to prepare for war inside Lebanese villages, towns and cities south of the Litani River, “arming itself with more lethal and accurate weapons to harm the Israeli home front.”