The authorities placed the structure on a flatbed truck and carted it away from the small community, which is located near the Shiloh settlement. 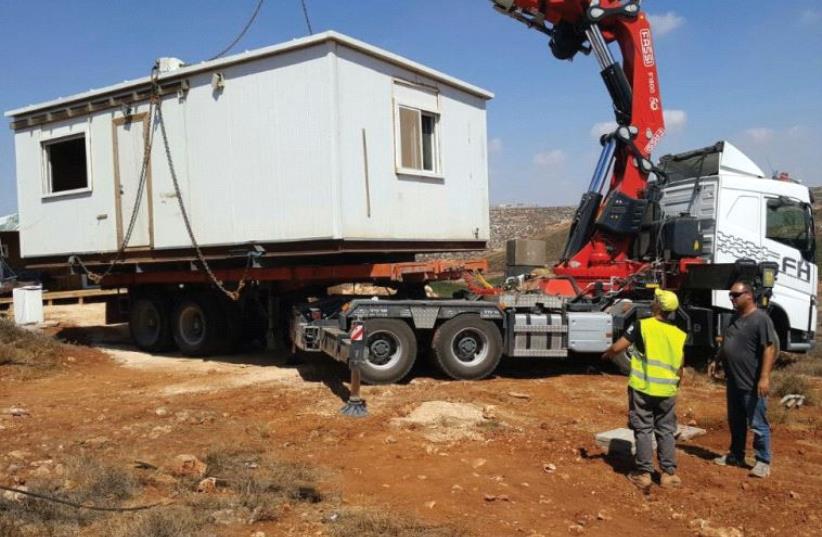 AN IDF CRANE yesterday removes the illegally placed modular home belonging to a soldier at the Esh Kodesh outpost in the West Bank.
(photo credit: TOVAH LAZAROFF)
Advertisement
The Civil Administration on Monday confiscated the small modular home of a member of Shayetet 13, the naval commando unit, who lived in the West Bank’s Esh Kodesh outpost.It placed the structure on a flatbed truck and carted it away from the small community, which is located near the Shiloh settlement.The Coordinator of Government Activities in the Territories said that the home had been illegally placed there without the proper permits.The removal of the home comes in the midst of debate over the fate of unauthorized settler and Palestinian structures in the West Bank.The Jerusalem Periphery Forum said it was amazed at how quickly the Civil Administration razes unauthorized Jewish homes on state land in Judea and Samaria, while dragging their heels when it came to demolishing illegal Palestinian structures.Residents of the Esh Kodesh outpost have called on the government to legalize their small community, which was first created in 2000 with NIS 600,000 from the Ministry of Construction and Housing.“It’s unfortunate that, a time when there is rampant land theft and illegal building by Arabs without any interference [from the Civil Administration], that decision makers decided today to destroy the home of a soldier, a naval fighter, who will have no home to return to,” a spokesman for the Esh Kodesh outpost said, adding, “It’s sickening to think of the priorities of the decision makers.”At a meeting of Likud activists on Sunday night, Jerusalem Mayor Nir Barkat called on the government to retroactively legalize all the estimated 2,000 unauthorized settler homes in Judea and Samaria.Likud Minister of Science, Technology and Space Ofir Akunis issued the same call when he visited the Amona outpost on Monday.The High Court of Justice has ordered it demolished by December 25.He is among those politicians who believe the issue must be resolved through Knesset legislation, even though Attorney-General Avichai Mandelblit has stated that such a move would be unconstitutional.