Among the targets were the headquarters of the Beit Lahiya Battalion as well as a high-rise building in the Shati refugee camp in Gaza city.

IAF strikes Gaza overnight, July 14, 2018 (IDF Spokesperson's Unit)
Advertisement
Throughout the day on Saturday and the early morning hours of Sunday, Israel struck a wide range of terrorist targets in the Gaza strip responding to incessant rocket and mortar fire emanating from the coastal enclave over the weekend, the IDF spokesperson reported.
Demolition of the Hamas Battalion HQ in Beit Lahia, Gaza, July 14th, 2018 (IDF Spokesperson"s Unit)
Among the targets on Saturday were the headquarters of Hamas's Beit Lahiya Battalion, with jets striking urban warfare training facilities, weapon storage warehouses, training compounds, command centers and offices as well as a high-rise building in the Shati refugee camp in Gaza city.“The battalion command’s entire infrastructure has been destroyed, vaporized, turned into a giant hole,” Israeli military spokesman Brigadier-General Ronen Manelis said concerning the first of the two targets.“This attack displays the IDF’s advanced intelligence and operational capabilities and could expand as needed and in accordance with a situational assessment.”
IDF Strikes High Rise Hamas Urban Training Facility, July 14, 2018 (IDF Spokesperson"s Unit)
The second target, the high-rise building in the Shati refugee camp, supposedly served as the "Palestinian National Library" and was located in the south of the Rimal neighborhood of Gaza City. Its five floors were intended to be used for public and government services. However, the structure was converted into a training facility for Hamas battalions which was used as an urban warfare training facility and had a tunnel underneath for underground warfare training.The IDF clarified that it had warned residents of the building in advance of the strike, however, at least two children and several other Gazans were wounded."Hamas continues to use civilian infrastructure for military purposes, thereby endangering its citizens," the IDF spokesperson emphasized. 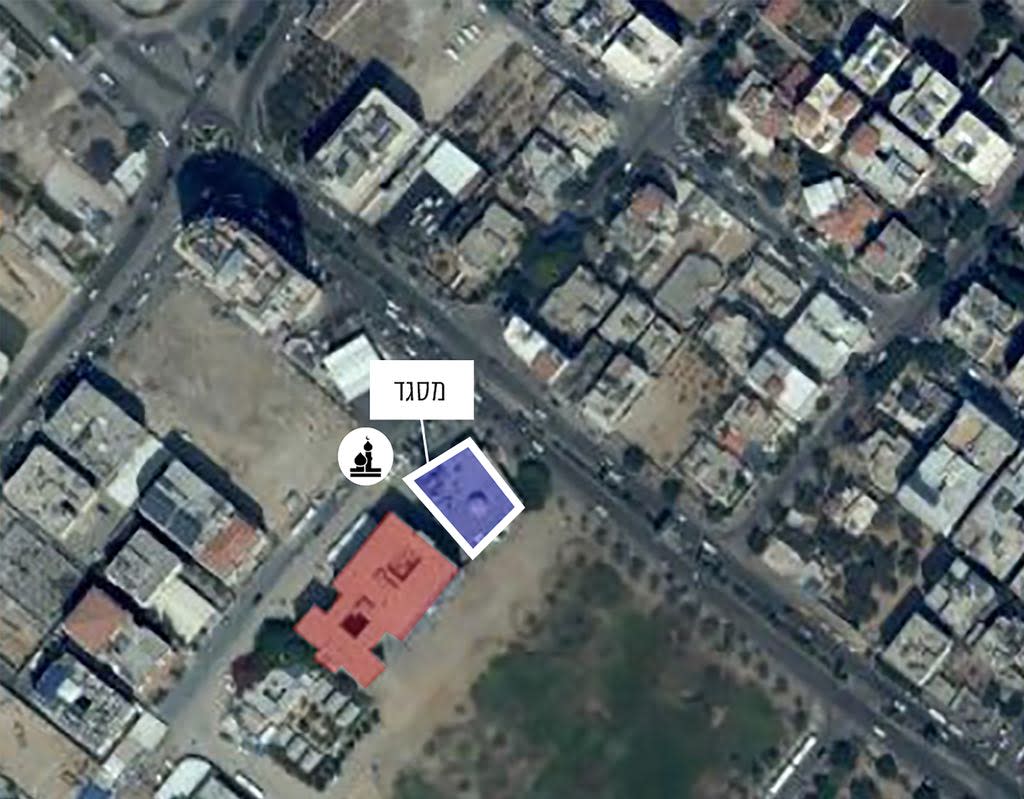 The mosque next to a high-rise building in the Shati refugee camp in Gaza city, targeted by the IAF (IDF Spokesperson's Unit)
Israelis wounded by Palestinian rocket fired from Gaza into Israeli town of Sderot, July 14, 2018 (Reuters)
Earlier in the day, the IAF carried out the largest daytime operation against Hamas since Operation Protective Edge in 2014 with fighter jets hitting 40 targets across the Gaza Strip several hours after it struck several other Hamas targets, including two offensive terrorist tunnels in northern and southern Gaza, as well as several targets in military compounds where Hamas assembles incendiary balloons and a Hamas training camp.Throughout Saturday and the early morning hours of Sunday, close to 200 projectiles were launched from the Gaza Strip toward the border communities, at least 30 of which were intercepted by the Iron Dome.One rocket landed inside a kibbutz in the Sha’ar Hanegev Regional Council area and another rocket struck a courtyard of a synagogue in Sderot, without causing any injuries. A third projectile hit a home in Sderot, wounding three Israelis.According to Magen David Adom, a 14-year-old girl was lightly wounded in her legs, a 15-year-old was lightly wounded with injuries to her face from broken glass and a 52-year-old man was in moderate condition after sustaining a chest wounded. All were evacuated by MDA to Barzilai Medical Center in Ashkelon.Despite reports of a ceasefire late Saturday evening, red alert sirens kept the residents of southern Israel awake and the IDF busy all throughout the night.Anna Ahronheim contributed to this report.