Security forces were searching the area for the vehicle and the suspects. 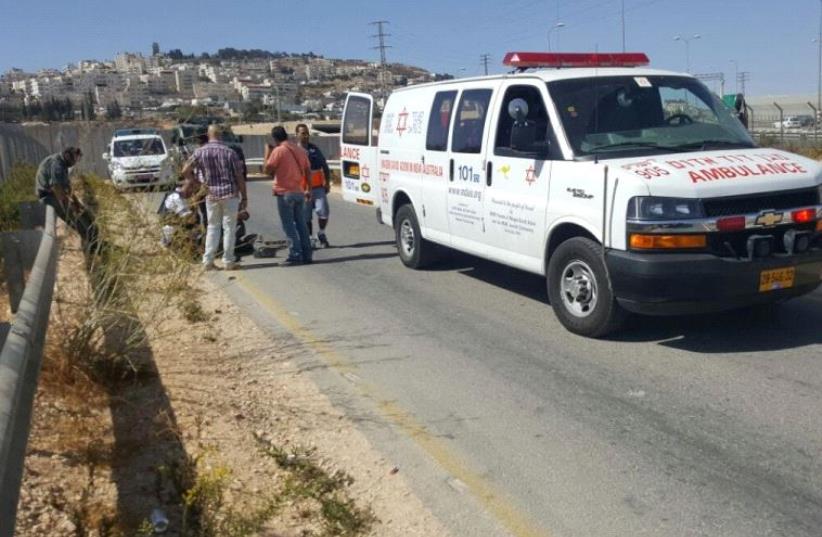 MDA on the scene at the a-Zaim checkpoint
(photo credit: MAGEN DAVID ADOM)
Advertisement
Two border policemen were injured Thursday afternoon when struck by a car at a checkpoint near Ma’aleh Adumim, and security officials are trying to determine whether the incident was criminal or nationalistic.According to police spokesman Micky Rosenfeld, the officers’ car was rammed near a-Zaim, an Arab village between Jerusalem and Ma’aleh Adumim, by a vehicle driving dangerously against the flow of traffic.“What took place was that an unidentified car hit a vehicle with two officers in it, and then fled. Police units that were patrolling the area pursued it into a-Zaim,” said Rosenfeld. “We are still searching for the suspects, and investigating whether or not it was a criminal matter or terrorist attack.”The two officers, who sustained light wounds, were treated at the scene by Magen David Adom paramedics, before being transported to Hadassah- University Medical Center on Mount Scopus, where they were listed in good condition.Security forces continue to search the area for the vehicle and the suspects, Rosenfeld said.Meanwhile, amid a rise in violence, including a drive-by shooting attack that killed two on Monday, Jerusalem police say they are seeking to ensure security during the Succot holiday.Rosenfeld described the atmosphere around east Jerusalem’s Arab neighborhoods as “relatively tense” in light of the death of a 20-year-old resident of Silwan, who was shot and killed by the Border Police after the man threw a firebomb at officers during a riot in the neighborhood on Wednesday.During Yom Kippur, riots also took place in the east Jerusalem neighborhoods of Isawiya and Jebl Mukaber.Police said security would be heightened around crowded public spaces, shopping centers, the Old City and synagogues in an attempt to ensure the safety of worshipers over the holiday, and “to prevent the entry of hostile elements.”“Security measures will be implemented from Sunday onward, with an emphasis on security in and around the Old City of Jerusalem,” Rosenfeld said.Police will also protect a number of large-scale events over Succot that pose a security challenge, including the Priestly Blessing on Wednesday, when thousands will flock to the Western Wall.