Fourth attack of the day: IDF soldier wounded in terror stabbing in Hebron 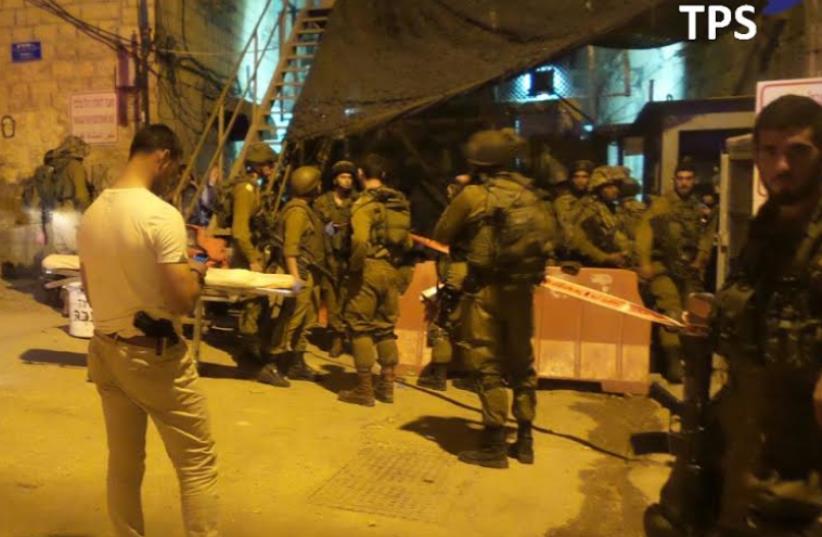 Terrorst stabbing in Hebron
(photo credit: TAZPIT)
Advertisement
A terrorist stabbed and moderately injured an IDF soldier at the Hasam Shoter checkpoint in Hebron on Saturday night.A second soldier shot and critically wounded the Palestinian attacker. The assailant received initial medical treatment at the scene.Magen David Adom paramedics evacuated the wounded soldier to the Hadassah Ein Kerem Medical Center in Jerusalem with knife wounds to his upper body.
Scene of 3rd Hebron stabbing Saturday
Shortly afterward, dozens of Jewish youth attempted to obstruct the pathway and punctured a tire of the ambulance carrying the terrorist from the scene of the stabbing attack.IDF forces eventually dispersed the crowd and the ambulance manage to drive away from the scene. The attack was the third in Hebron and fourth of the day, along with one in Jerusalem.Earlier in the day in Hebron the Israeli target of a knife attack shot and killed the terrorist. The Israeli was not wounded in the attempted attack.The suspect in the first Hebron attack approached a checkpoint in the city and tried to stab one of the security forces. When this attempt failed, he came after an Israeli citizen who used his personal firearm and shot him three times. The citizen was visiting the city and was returning from prayers at the Tomb of the Patriarchs at the time of the attack.    Shortly after the Hebron attack, a terrorist was shot and killed in the Armon Hanatziv neighborhood in Jerusalem after trying to stab an Israeli. No one was wounded by the attacker.  A civilian told the security forces that he saw a suspicious looking man in the area and after searching they found him on Harav Hovel street neat the scenic promenade in the neighborhood. In the third attack of the day, a Palestinian woman stabbed and lightly wounded a female Border Police officer in Hebron before noon. Bystanders alerted police in the area when they noticed a suspicious looking person holding a bag. Police began to immediately search the area, locating a suspicious looking person on the street and began an inspection.Border Police asked the suspect for her identification, and shortly afterwards she pulled out a knife and attempted to stab the female Border Police officer, according to the Jerusalem Police statement.